It certainly did seem like there was a convergent collection of ideas in the early days of the Famicom and NES. Nintendo helped to define platforming gaming with Super Mario Bros., a game that took the nascent elements of the genre and evolved them into a game that felt amazingly playable and natural. From that point forward various game companies worked to push the ideas of platforming further, eventually creating the (then still young) Metroidvania genre. But each came at it from their own perspective, generating their own independent riffs on the same concepts.

Faxanadu is technically part of the Dragon Slayer series, a Nintendo-exclusive spin-off of the second entry in that series, Xanadu. The title is a portmanteau of "Famicom" and "Xanadu", although this NES game diverges from Xanadu in its actual game play. While both titles were side-scrolling affairs, Xanadu (created by parent company Nihon Falcom) played more closely in the traditional action-RPG genre while Faxanadu (licensed and developed by Hudson Soft) drops many of the RPG elements of the main series to focus, instead, on a more action-platforming experience. They developed their own take on Metroidvania before that was even a thing.

For those only buying and playing games in the West during the era of the NES can be forgiven for thinking that Faxanadu was nothing more than a poor clone of Zelda II: The Adventure of Link or Castlevania II: Simon's Quest. It's not, and the Japanese release dates for all three games, originally released within a few months of each other in 1987, illustrate the idea of convergent development in video games. These three games all play in a similar style, with similar mechanics and ideas, even if they each approach it from the foundations of a different, larger franchise. In the case of Faxanadu we have an action-platformer with some light RPG elements and nods to a larger world, hinting at the larger Dragon Slayer franchise (even if, realistically, it has little to do with that main series of games).

In Faxanadu the players takes on the role of a nameless protagonist tasked with restoring the life water of the world. The various fountains of water that keep elf society alive have all dried up, the result of an attack via the evil dwarves. The dwarves, meanwhile, have been taken over by the Evil One, a nefarious agent who wants to rule the world. A meteorite fell from the sky, and the Evil One used it as a sign that now was the time to rule. The hero has to venture out, restore the life water, and then collect the pieces of Dragon Slayer gear, all so they can take on the Evil One and restore peace to the world. 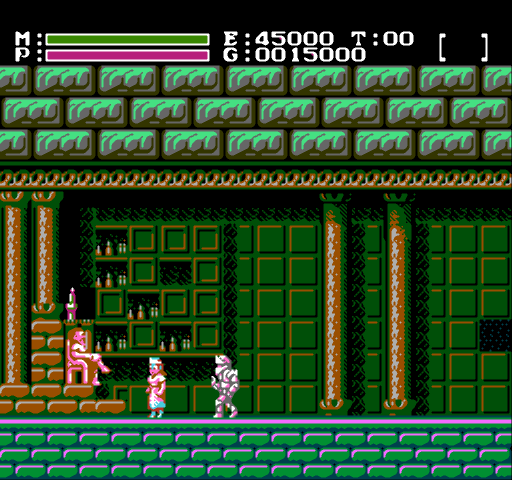 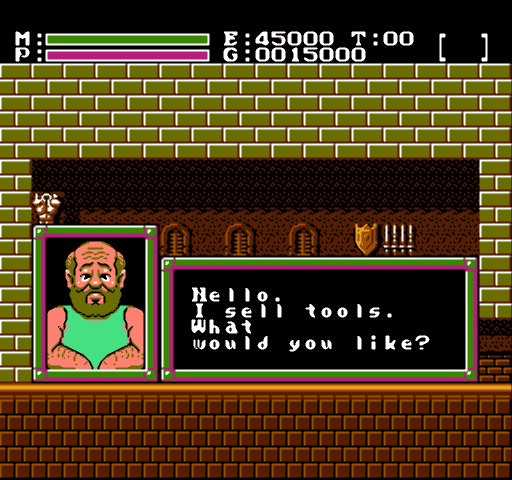 As this hero, the player will find themselves exploring a large, interconnected world. Everything is played from a side scrolling perspective, from the first town the hero enters all the way through to the last fortress of the Evil One. Fighting is done in that side-scrolling perspective (a departure from the previous titles in the Dragon Slayer series were battles were top-down affairs), and everything is real time. Faxanadu, like other entries in the Metroidvania genre, leans heavily on platforming and action to carry the adventure.

There are key differences between this game and other entries in the genre, though. For starters, the interconnected world is show via a series of single-screen areas. The action flows from screen to screen but there's absolutely no scrolling. In this regard it more closely resembles an MSX title, like Vampire Killer, which due to the limitations of the hardware couldn't really handle smooth scrolling. It's actually similar in this regard to another Hudson Soft nod towards the Metroidvania genre, Milon's Secret Castle, which was also largely composed on non-scrolling single screens. Mechanically, then, this game feels very much like a Hudson Soft game.

That's not to say it's a bad title, though. While the early going can be a little rough, with the hero equipped with only a dinky dagger and low-grade magic, the title is honestly quite forgiving. Yes, it does take a little time to get used to the hit boxes of enemies and your own weapons, but once you get the mechanics down, the game play is fairly smooth. This is coupled with a frankly quite kind save and restore system where even when the character dies they simply are returned back to the last town guru they visited, allowing them to pick right back up and try again, no progress lost at all (beyond having to platform back to where you last were when you died).

On top of that, the game has both a magic system and an item system that compliment each other. You can use magic for attack, and this burns energy from your magic meter, but you don't have to choose attack over exploration; your items handle your exploration needs (from mattocks that break walls, to boots that let you fly for a short time) while magic can remain exclusively an attack option as needed. This stands in contrast to Zelda II which used magic for everything (even healing) and if you ran out of magic at an inconvenient moment you were kind of hosed. I like the way Faxanadu handles it better. 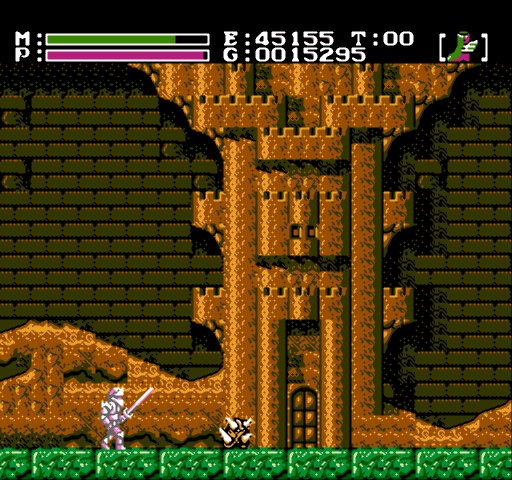 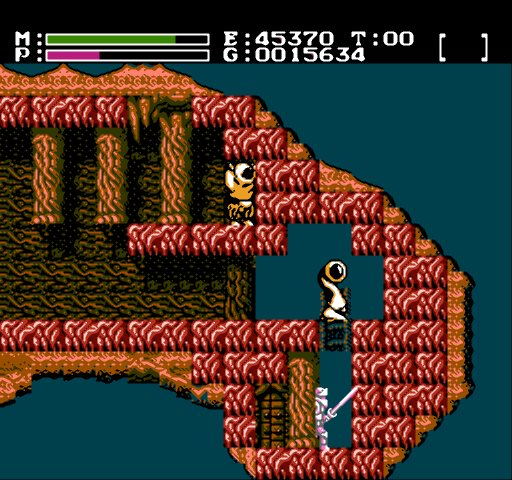 I also like combat in this game a lot more than in Zelda II. Combat in Zelda II always feels fussy and punishing -- you have to really get good at the combat, the parrying and finding the right opening on enemies while dodging their attacks, and even then you still die regularly. Here, though, enemies don't have a lot of ranged attacks, and they really can't block your own blows, meaning the advantage is much more in your favor. Faxanadu isn't necessarily easy but it does feel fair.

That being said, there are times where the game seems purposefully obtuse. The world is one continuous series of screens with no overworld to break it up. It does have a couple of large dungeons within, and these can get pretty maze-like. On top of that, most zones of the game look very similar, leading to a lot of confusion about if you'd seen a place before and are just repeating exploration all over again. Exploring the world can be confusing and, without a premade map, could prove rather difficult. This isn't a game I'd want to play without at least a full set of maps in front of me, for sure, and I pity any kid that tried to get through it back in the day.

Still, I do think that, especially for the era in which it arrived, Faxanadu was a worthy entry in the burgeoning Metroidvania genre to come. It's not perfect by any stretch but it does a lot of things right all without being too difficult or annoying. The game felt like an oddball when it came out in the West, arriving much later in the NES's life-cycle, but as a Famicom entry it certainly proved interesting an effective. Maybe it would have been better served not being tied to the Dragon Slayer series at all, but however fans came to it they certainly found an interesting title... if they could get through its mazes.

As noted above, the same building blocks that were at play in titles like Vampire Killer and Simon's Quest could also be found in Faxanadu. This game does feel, in many ways, like an unofficial marriage of those two Konami titles.

For starters, the single-screen exploration is like Vampire Killer. This is joined by having to collect a bunch of keys (although you can buy them in stories instead of having to find them in levels), along with shop keepers that sell wares and sub-weapons (magic) you can buy and use while you have the energy for them. That's all part of the shared DNA of the genre, sure, and I doubt Vampire Killer was a direct influence on Faxanadu. 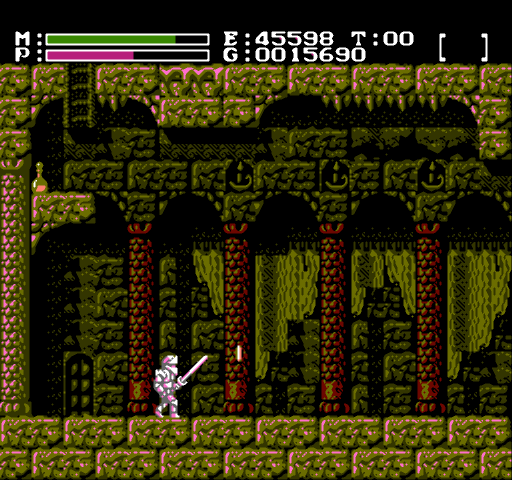 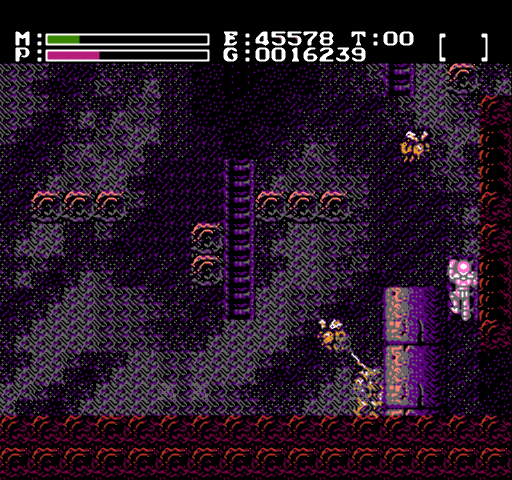 Meanwhile, the full, interconnected world with side-scrolling dungeons to explore, monsters to fight in real time, and exploration items to collect makes this game of-a-piece with Castlevania II. As these games came out around the same time there's no way Hudson was just copying Konami, but both could easily have seen what Nintendo was doing with Metroid and thought they could do their own spin on the material. In the end, so much of the platforming genre comes back to Nintendo.

I really like looking at this old games and seeing this convergent development. You don't realize how many games seemed to influence (and build off of) each other until you see them all in context.