The Battle of Olympus

When I started this site way, way back I had the opinion that Metroidvania titles were a rare oddity in the early days of video gaming. They're commonplace now, with Stem and modern consoles ushering in a renaissance of Metroidvania games, with titles in the genre regularly getting announced and released, but these games seemed rarer way back in the day. You had oddities, to be sure, like Castlevania II: Simon's Quest and Zelda II: The Adventure of Link, but those were curiosities in their own series, not elements of a larger genre, right?

Well, going through and covering various related games, and researching deeper and deeper into the 8-bit library of games, I've discovered just how wrong that opinion was. While the genre didn't have the name "Metroidvania" at the time, and it didn't even start with Metroid, the "action platformer RPG" genre had plenty of representation even back in the mid-to-late 1980s. Another solid example of that is the Infinity developed, Imagineer published action-platforming exploration RPG The Battle of Olympus, a game that feels very of-a-piece with all the other genre titles released on the NES around this time.

The game focuses on Orpheus, a hero in Ancient Greece, who is put onto a quest to save his lady love, Helene, after she's taken by Hades. As was common in myth, Hades saw a woman he was interested in and kidnapped her, taking her to his underworld so she could be his. Orpheus as to venture out into the world to try and find a possible path to the lands of Hades and find a way to rescue his woman. And that's where the platforming and exploration come into play.

Along the way, as Orpheus quests, he'll find villagers with helpful information that will point him towards secrets and passageways. More importantly, though, is that Orpheus will also meet with various gods in their hidden temples. Talking to the gods will gain Orpheus boons, items he can use to further explore the world of Ancient Greece. These boons vary from better shields and swords to boots that let him jump higher, items that illuminate passages and enemies, and more. Collecting all the items will be required for Orpheus to complete his quest and save Helene.

Developed by a three person team at Infinity, The Battle of Olympus was the company's first game, clearly inspired by other titles that had been released for the NES. Despite it being their first game, the title is a pretty competent adventure. It has its rough patches, like any NES does (especially after the story and dialogue is passed through localization), but the game plays well and encompasses a large adventure with plenty to explore.

The presentation of the game is clean and cheery. Graphics are nicely polished for the era, detailed enough to not feel chunky and with enough colors used that everything is easy to see (without being too bright on the eyes). The music is bouncy, with plenty of tracks used to denote the various area Orpheus explores. It all comes together in a nicely put together package, especially impressive considering that only three people worked on this project together.

When it comes to the game play, The Battle of Olympus has a lot to offer. It's pretty obvious that the team saw what other action games were doing in the genre and they took notes on things to correct. Combat is quick and painless with your weapon easily hitting anything in front of you (without some enemies being able to slide under your melee weapon unfairly). Most enemies will drop olives (currency) or single-bar health aids, meaning you can constantly gain money and energy as you go. Once you get the feel for combat it's pretty easy to traverse the world, surviving as you go along without worry.

With that being said, there are places where the game feels a little sloggy. Plenty of times there are merchants that will ask for a lot of olives to make an item, and if you don't have the olives on you then you'll have to go and grind for them. Get used to grinding as there are plenty of places where this will be required. Oh, you want the item from Ares? Well, better shell out 80 of your precious olives (out of a max cap of 99) because gods don't part with their treasures cheaply. Every item in the game is necessary so you can't skimp out, making the grind that much more annoying.

While the combat of the game feels polished the construction of the world is unnecessarily obtuse. Most dungeons of the game will have multiple layers to their setup, with doors interconnecting each layer. It's pretty easily to get turned around or lost, especially when doors are hidden in backgrounds and all the areas in a dungeon look the same. I had to use a map and a guide to get through some sections and I hate to think how lost kids back in the day might have gotten. Clearly the designers expected you to slowly map out everything which is just annoying (to say the least).

If we want to get really picky, most of the items you get don't really enhance Orpheus. Sure, his swords, shields, and Hermes Boots aid him directly, but the other items, from crystal balls to bracelets, all act as keys locking away further progress. It's just gating for the sake of gating, setting the hero on a more linear quest until he's done X, Y, and Z first. I usually prefer gating items to have some functionality beyond, "you have to get this to get past here and then it's useless." The Metroid series sets a high bar in this department and everyone really should work to match it.

Still, despite these tedious moments I found myself having a fair bit of fun with The Battle of Olympus. It's not the best Metroidvania on the NES (it's probably not even the best entry into that genre released in 1988) but what it does well it does really well. That goes a long way when you're looking at the more obscure, less loved retro games.

Of note, though, there was a Game Boy iteration of the game developed by Radical Entertainment and published by Imagineer only in Europe. This version doesn't quite get the mix of all the elements that worked for the NES edition of The Battle of Olympus -- the sounds are off, and some enemy hit boxes aren't quite right -- making for a poorly, less enjoyable experience. If you're going to play this game, do it on the NES instead.

This game nicely fits into the style and mechanics set down by the likes of Simon's Quest and The Adventure of Link. You have your hero, battling enemies on a side-scrolling plane, getting random drops and collecting currency as they go. Not everything is one-to-one (there's no experience system here, and very little in the way of magic) so there's no perfect parallel, but you can't help but see what the programmers were going for when they crafted this title. 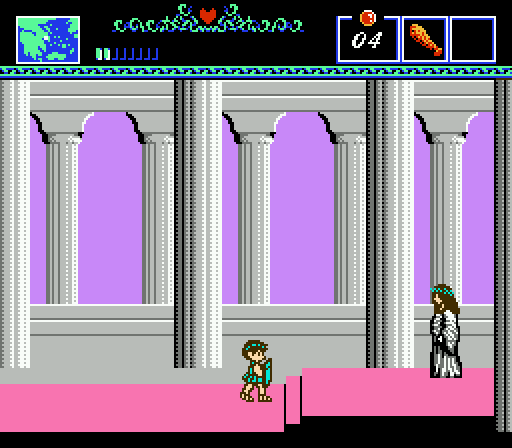 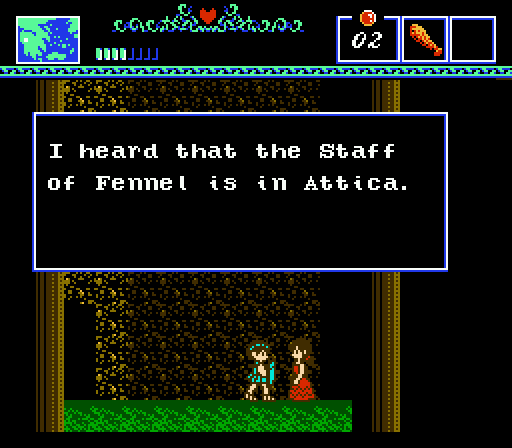 It is interesting to see a game tackle the Greek mythology so whole-heartedly. Having creatures like the Cyclops, Medusa, and Minotaur show up here when most would consider them mainstays of the Castlevania series, is pretty neat. The creatures are in the public domain, of course, so anyone can use them. It's just that so few people actually do.

Honestly, if the graphic colors were turned down maybe a couple of shades, and little Orpheus was given a whip instead of a club, you'd have a pretty good Castlevania title here (or maybe a Haunted Castle spin-off) on your hands. it feels very like-minded with our favorite game series, to be sure.