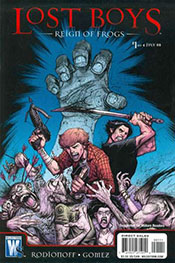 Serving as an interquel between The Lost Boys and Lost Boys: The Tribe, Reign of Frogs tells the story of the two Frog Brothers, Edgar and Alan (played by Corey Feldman and Jamison Newlander, although the resemblance to the two actors and their comic parallels is distinctly lacking) as they battle a returning foe from the first movie.

Told as a flashback between Edgar and a little boy looking to become a vampire hunter, Edgar and Alan have just come back from defeating vampire senators in Washington D.C. Back in Santa Clara, they are confronted by David (the evil vampire biker leader from the first movie, looking nothing like Kiefer Sutherland in the comic) and two of his vampire flunkies. David wants revenge on the Frog brother for what they did to him and his clan, in addition to wanting Star (his girl from the first movie) back.

After a battle at the Frog Brothers' comic shop, the boys, now teamed up with Sam (from the first flick, who looks less like Corey Haim than anyone else has looked like one of their live counterparts so far) head off to find the head vampire so they can kill them. This leads to more and more convoluted plot twists as the author tries, desperately, to make this comic at all interesting.

The biggest issue with this comic is just that the story isn't worth reading at all. Regardless of whether or not you think a Lost Boys sequel was necessary, this comic is even more unnecessary. The Frog brothers are interesting characters... in small doses. Having a comic devoted to them shows just how much these characters cannot carry their own adventure. The story amounts to "Frog brothers fight vampires, and then they run around a lot." Admittedly, more could possibly have been done, but considering how little these guys seem to do besides fight vampires and sell comics, I'm not entirely sure what. 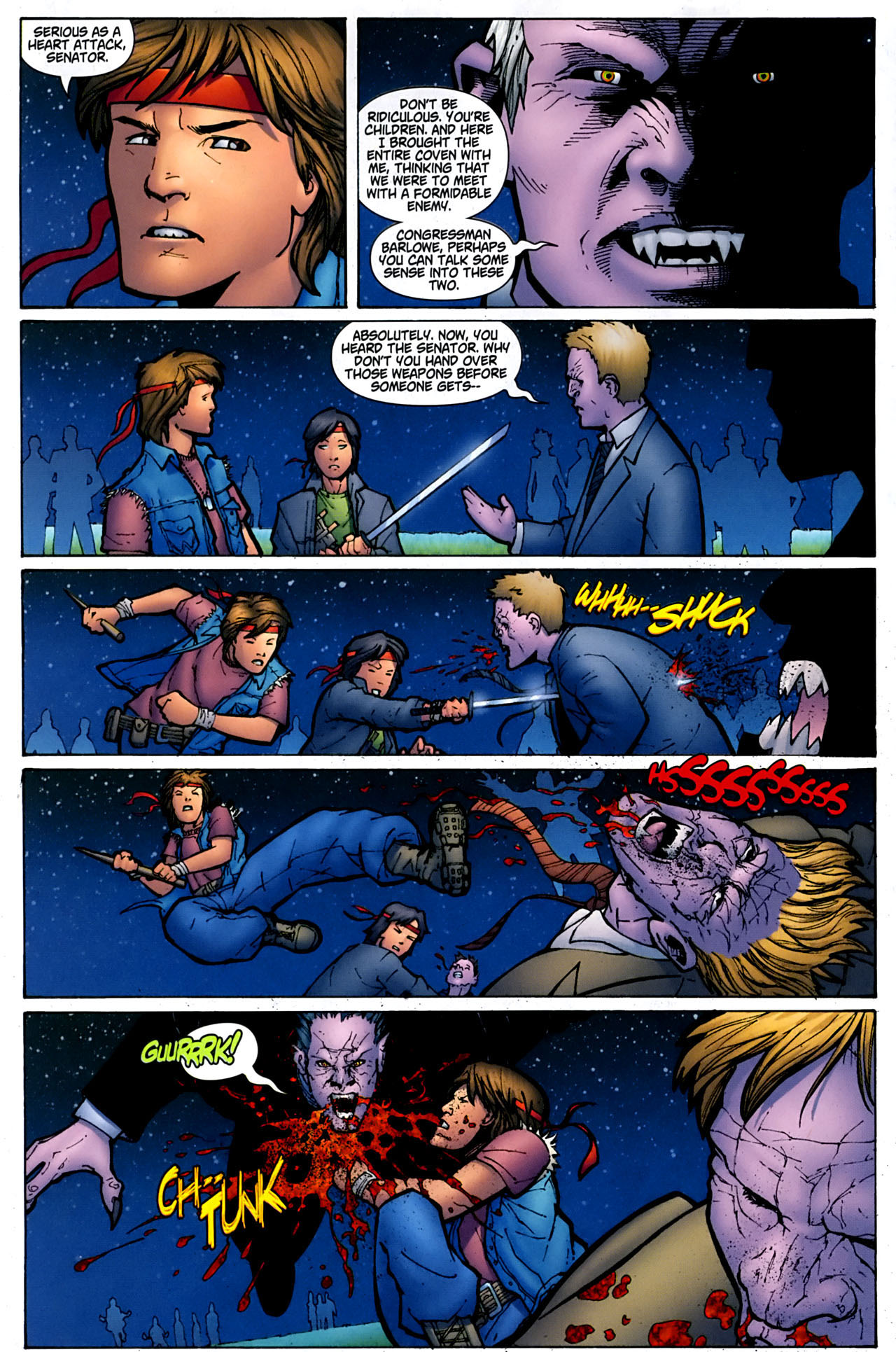 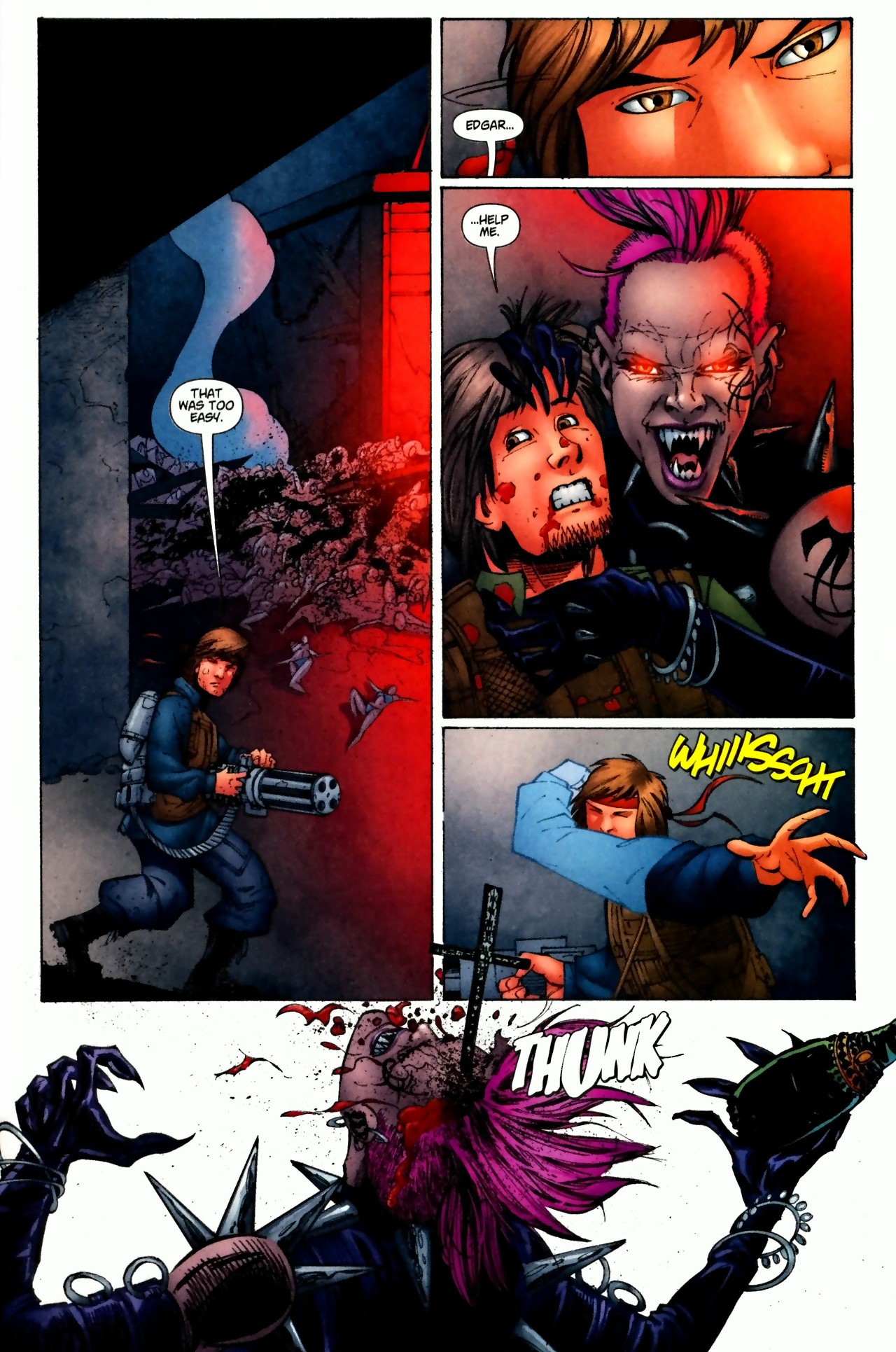 Maybe they could have fought vampires at a comic con. At least then the location would have been different.

Taking the setting and story out of the equation, some of the blame for how terrible this book is rests with the author. The story just isn't well written, and what passes for attempts at humor are not humorous. They're just... sad. Staking a vampire with a Washington Monument statuette is mildly amusing, but not when it's done three panels after the thing is bought. You have to draw it out, let the humor build. Doing it so soon is expected. Even when they buy it, you're stuck there going "heh, that looks like a stake."

That is one example, but it is indicative of the pacing. The story is one action sequence after another, never taking up more than a page or two, and then the characters are running off to the next sequence. After a while, you just stop caring -- that is, if you ever cared at all.

To be fair, picking it up I even said, "Ooh, a Lost Boys comic! This has to suck." Lo and behold, I was right.