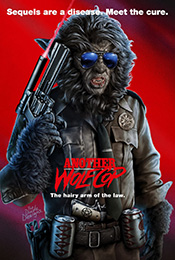 Sometime after the events of the first WolfCop, things have settled down in the quiet little Canadian town. Well, as quiet as they can be with a werewolf police officer running around. However, things are about the get very interesting as a new threat (under the guise of a beer company) is moving into town. Soon the town is drowning in tainted beer, more changelings (the villains from the first movie), and a second lycanthrope. Will our favorite Wolf Cop, Lou Garou, be able to save the day before everyone is killed at the inaugural bout of the town's new hockey rink?

As an unabashed fan of the first WolfCop, crappy as that movie is, I was stoked when I found out there was going to be a second film in the franchise. I didn't expect it to be good -- really, it's hard to have any expectations of real quality in the WolfCop series -- but I figured it would be gory and funny and give me some new and unusual twists on the lycanthrope formula.

In some regards, Another WolfCop is a fine successor to the original. If you ever wanted to see human-lycanthropic cat sex, or a bunch of people giving birth to little changelings from their stomachs, or lots and lots of gore in a hockey rink, then this second film is your ticket to glory. The film certain tries to out-do itself when it comes to cheap thrills and tons of spills.

The problem is that the producers clearly didn't have a sequel in mind when they made the first movie. The original WolfCop might not have been a big-budget film, but it was tightly plotted, well executed, and didn't out-stay its welcome. If you'll forgive the pun, Another WolfCop is much more of a shaggy dog story than the first movie -- the flick takes a long time to get going, and while there's plenty of gore and outrageous moments, there's really not a whole lot of actual story to it. Hell, the film doesn't even really have a proper ending -- some stuff is done, there's a big fight in the hockey rink, and then everyone just shrugs their shoulders and calls it a day. Roll credits. 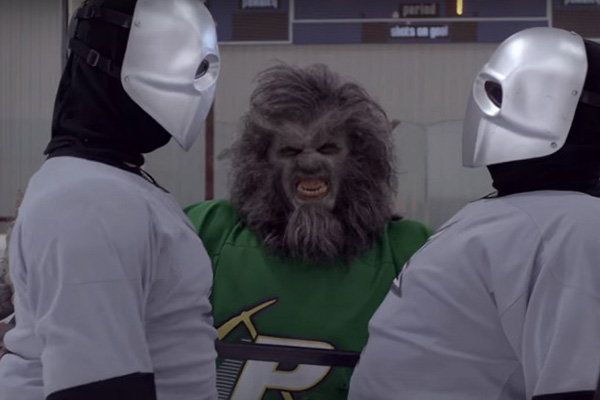 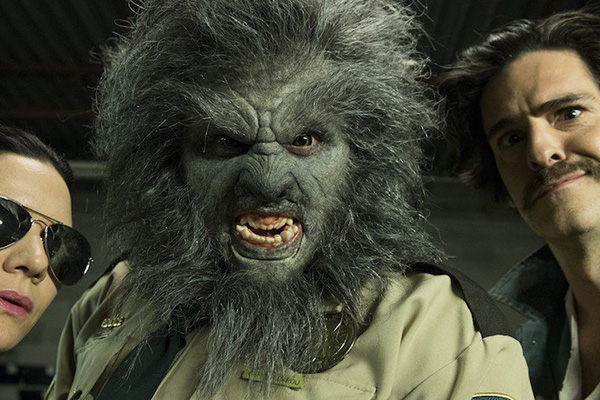 Certainly everyone on screen is having a good time and up for whatever the movie throws at them. Most of the original cast returns for Another WolfCop. This includes not just Leo Fafard as Sergeant Lou Garou and Amy Matysio as Sargeant Tina but also Jonathan Cherry as Willie Higgins, despite the fact that Willie was killed off in the first film. The movie has to pull some narrative twists to make that all work. Even then, it seems to forget just what happened and which version of Willie we're actually using. Once again, just shrug your shoulders and move on.

The villains, too, aren't very well thought out. Swallows (Yannick Bisson) is the lead changeling in charge of the whole operation, but he sends a bunch of minions out against the Wolf Cop to try and keep him out of the way. This includes a Frankenstein monster kind of creature as well as chemically enhanced hockey players, none of which get more than a single scene to do their thing, no story, and then are gone as quickly as they come in. Other minions are given menacing things to do but then just disappear without explanation. It's all very messy and not nearly as well put together as the first film.

The biggest knock against the film, though, is that Wolf Cop isn't really necessary to the whole proceedings. Sure, he saves the day but only because the villains go out of their way to drag him into it. This isn't like the first film where the Wolf Cop is central to the proceedings -- if the villains could have just not attacked the Wolf Cop, it's doubtful he, or any of his friends, would have ever clued in that anything was going on. It's hard to see a point to the movie when your main hero is superfluous to the whole story.

I still had fun with Another WolfCop but it is, in no way, as good a film as the first movie. If the original WolfCop required an asterisk whenever someone said it was a "good" flick, it's sequel requires an asterisk so big I'm pretty sure a computer monitor large enough to display it hasn't been invented yet. If you liked the original you'll probably find something to like in Another WolfCop. Just don't expect another B-movie classic out of this inessential follow-up.