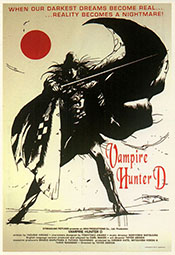 Late one night, while making her rounds around her farm, our heroine Doris is attacked by a vampire, the dread lord Count Magnus Lee. She's bitten by the evil vampire, and the dark one tastes her blood deciding right then to make her his bride in two-days time. Thankfully, the next day a lone hunter comes into town. His name is D and his specialty is killing vampires. Doris enlists his help to fend off the forces of darkness and it's up to D to take on the Count (and his daughter and entourage) before Magnus is able to marry his bride and fully turn her into one of the undead.

Going in to watch Vampire Hunter D one has to take into consideration that, despite being a feature-length anime, the film doesn't have a very big budget. It's weird and kind of cheap looking, but a lot of that has to do with the budgetary constraints. It also has a remarkably awful dub (at least the version I watched) so the dialogue is also terrible -- everyone has to narrate everything they're doing, and there's only so much screen time so they're talking constantly, at a fast clip, and practically stumbling over their own words. And that's when the story makes sense. In short, Vampire Hunter D is very hard to watch. Like, I want to like it but I just don't (and I've forced myself to watch it four times now, twice so I could review it a couple of times for this site).

Visually this movie is all over the place. At times the film seems to be attempting to invoke the feel and ambiance of the old Hammer horror movies. It manages it in the early going, with eerie long shots of castles and girls in short little dresses panting and needing for their hero to come save them. But then things get weird. The vampire show up, and then their minions come along, and there are a lot of different creatures with many different styles and substances, and it all mashes together into one long LSD acid trip. Monsters with boils and wings show up and taunt the hero. A giant appears with little reason as to why. There are ghosts a witches and transforming snake ladies, none of which are explained and all of which are in there seemingly because the artist thought it would be neat. The visuals aren't interesting, just weird (much like the characters). It's like the producers funneled Hammer horror through old 1960s weird-ass sci-fi animation.

That is, when you can actually see the visuals. Much of the film (at least in the standard DVD transfer) are beyond muddy, leading to a number of long shorts of black on black with maybe a hint of a color. I get that these are vampires, and much of the action takes place at night, but maybe sharpen up some of the details some? I'd like to see the movie I'm watching. 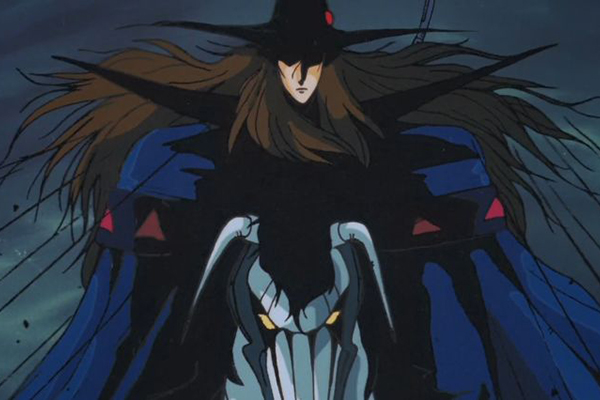 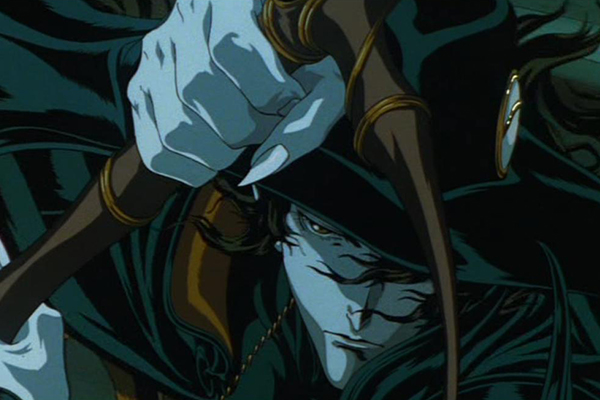 As mentioned there's also terrible writing to compound the issue. Again, I recognize I was watching it dubbed (and there are anime purist fanboys out there that are screaming at me for that). But part of the reviewing experience is watching flicks in different ways and, at least in English, Vampire Hunter D is an interminable mess. There's a whole lot of talking but very little plot. Everyone just talks about what they were doing, are doing, and will be doing. They talk about their motivations even when their motivations are clear, and there any number of odd lines and non-sequiturs that must of made sense to someone but make no damn sense now.

And despite all this talking, the movie is essentially, "girl is in trouble and hunter appears. Vampires show up and hunter fights them off. then he goes to the castle to hunter the vampire. Repeat twice more, then kill vampire. Fin." That's barely enough story to fill thirty minutes, yet Vampire Hunter D is three times that long. It's dreadful. I've never been so bored when so much fighting (and gore) is on screen.

That is something I'll give the movie credit for, though: it does not shy away from the gore. Everyone sprays blood when attacked, and it's like old martial arts, grind house, Tarantino levels of blood spray. It's funny to watch and funny is better than boring.

I'll also credit the main character. Although most of the characters in the movie are obnoxious (again, because they're always talking about what they're doing), D is a breath of fresh air. Largely this is because he barely says anything at all. He just stands, and broods, and kicks ass, then broods some more. He's the opposite of every other character, and the movie is better when it's just focusing on him. 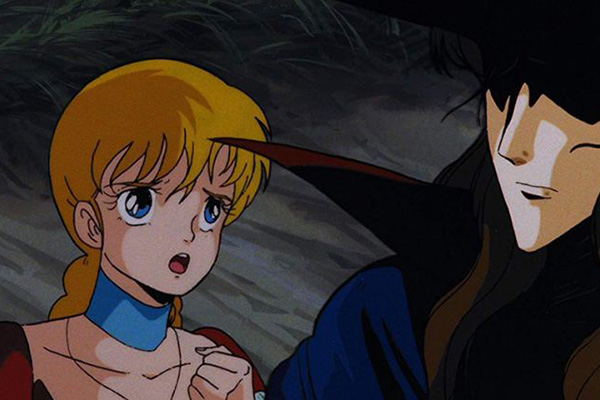 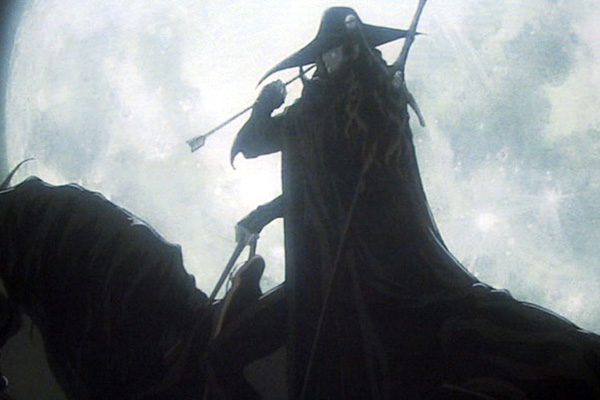 Now, look, I get it's a low-budget 1980s anime. It hampered by it's money, and when it came out, and the expectations of the era. There are much worse anime flicks out there to watch (in this writer's opinion that includes practically all anime every produced), so it's not the worst thing to pop in if you've never seen it before. Even still, it's just not a very fun watch. If you're a fan of the genre (weird vampire anime from the 1980s) you'll probably like it. For most, though, this film is more of a curiosity than a must watch.