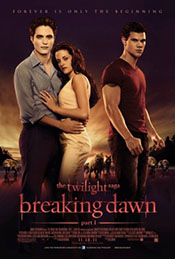 So, yeah, Bella and Edward are in love. Having reached the decision at the end of the last movie, they elect to tie the knot at the beginning of this film. Their ceremony is lovely to look at (although Bella seems uncomfortable to be there, so, you know, like any other day for Bella), the couple says some nice things, and then we're all whisked away to a magical honeymoon that only the idle rich could afford. They end up in a secluded spot the Cullens own in a tropic paradise, and there they finally consummate their forbidden love (forbidden because the rest of us are so bored watching it).

Trouble soon lurks, though, but not from outside the relationship. No, somehow Bella is pregnant, this despite the fact that vampires aren't supposed to be able to have children. The fetus starts quickly growing, much faster than it should, and it seems like the baby is feeding on Bella to survive. Now it's a race against time to find out what's growing inside Bella, which kind of beast the two of them have sired, and to find out if there's a way to save Bella before the pregnancy kills her.

Having not read the book this movie (and the next film) is based on, I don't know how true to the structure of the story this movie is. It certainly feels like half a movie since the film doesn't really have much of a climax (aside from the one on their honeymoon, boom!) and this half is the boring half. If Twilight were a television series, this would be the filler episode set halfway in to a season to set up plot-points the rest of the season. It's table setting, and boring table-setting at that.

I've harped on her performance through out, but Kristen Stewart really sucks in this series. I do think I've become numb to the painfulness of her performance as I'm starting to be able to tune her out. She's one of the two leads and, for the most part, I just try to ignore her whenever possible. That's where we're at with the series. 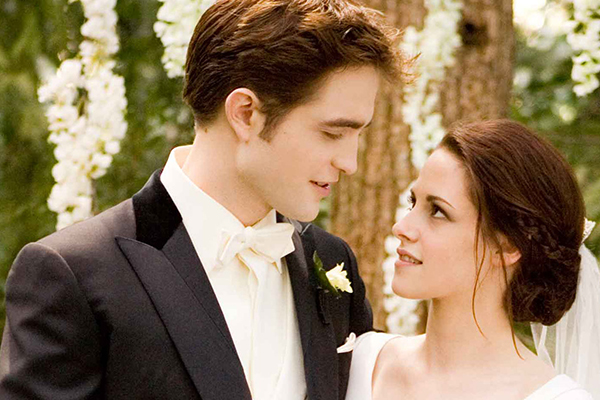 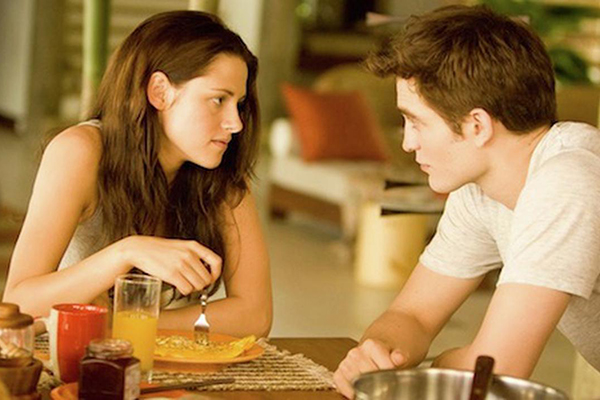 Remarkably, though, Robert Pattinson actually seems to finally be warming up to his character. He had actual emotions, and tiny bit of charisma, in his performance that actually made me hate him much less. His dynamic with Lautner (as Jacob) is actually funny at times and the two seem to have a good bro-chemistry together that lifts up their scenes (which, considering Bella is in most of their scenes, gives us something else to focus on than her). No one is acting at their best in these films (terrible directing and poor acting are the house style, apparently) but I can at least buy Edward and Jacob now.

The problem with this film is that so little happens. Sure, there's supposed to be tension, but there's never any fear that Bella is really going to die. This is Breaking Dawn, Part 1 so we know this isn't the end of the series -- if anyone is going to die it'd be in the next film, not this one. Besides, this whole time Bella has been trying to get Edward to turn her (because how else are they supposed to live together forever) so any dodge and feint towards killing the female lead is really only assuring her eventually vampire resurrection. There are no surprises. None.

So what's the point of this movie, then? I get that Hollywood studios love to turn one movie into two whenever they can (or even three, as was the case with the truly horrendous Hobbit movies) but this film barely has half an hour of plot and it stretched to a mind-numbing two-hours and three minutes.

It's sad because the movies had started to improve with Eclipse but now we're back to to usual boring slog once again. I just hope the last movie ends on anything close to a high note. I seriously need that after all this painful time I've invested in this terrible series.