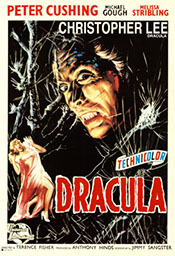 Editor's Note: In America, this movie was released as Horror of Dracula to avoid confusion with the 1931 Universal picture (which was still playing in theaters at the time). Although originally we had it listed under it's American name, with this new review we've switched the film back to it's "original" title.

After a long journey, Johnathan Harker arrives at Castle Dracula (itself located in Klausenberg, Romania). There he is greeted first by a woman begging for Johnathan's help in escaping the castle (because Dracula is a bad, bad man). The woman flees, but soon Dracula shows up, dark and charismatic, to thank Harker for coming to the castle. Harker is apparently there to aid Dracula in cataloging the castle's extensive books.

Or so it would seem. Harker, though, really is there to rid the world of the vampire menace -- most specifically, Count Dracula. Although Harker is able to defeat Dracula's vampire bride (the woman who originally begged for help, but really just wanted to feed on Harker's blood), Harker isn't able to kill the vampire Count before Harker, too, is turned into one of the undead.

Soon enough, Dr. Van Helsing arrives at the castle to find his friend and aid in eliminating the vampire plague. All he finds, though, is Harker's body, asleep for the day in the castle's crypt. Van Helsing kills his friend (a kindness, really) and then goes back home to Karlstadt (presumably Karlstadt, Germany) to inform Harker's fiance, Mina, of the man's death. There, though, he finds that Mina is near death and falling under the thrall of a vampire. Could it be Dracula? Is there anything to be done before Dracula spreads his vampire plague across the world? 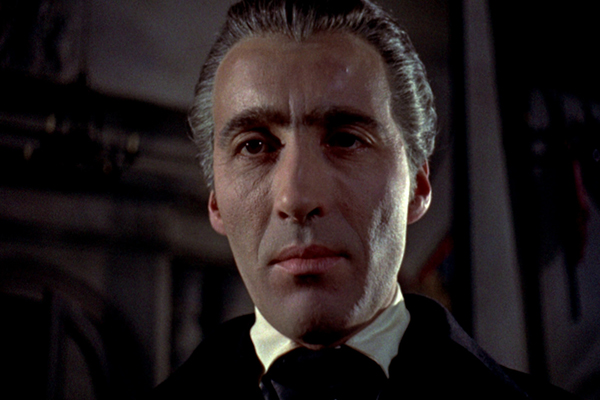 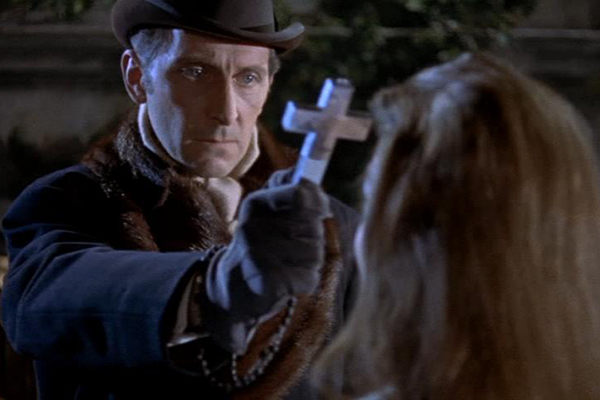 For an adaptation of the Bram Stoker original story (a story this reviewer really isn't a big fan off -- too long and slow), there's a lot to like about the 1958 version of Dracula. For one, the movie plays fast and loose with the details of the original story, crafting something just new enough and yet familiar. Characters have similar roles as in the original book (Mina or Lucy will always bite it in every version of the story, and the other girl will always come close to being a vampire thrall as well; Van Helsing will always be there to discover Dracula and save the day), and yet much of the plot is rearranged just enough to become different -- not just another standard Dracula adaptation.

To be sure, making Harker into a knowing vampire hunter from the start gives a certain momentum to the story. He's not some dumb schmuck that gets lured into Dracula's web -- he's there to fight the good fight, and he'll take down any vampires he can before he breathes his last. Plus, Harker then dies, which is a drastic change of pace -- and welcome note that leads you to think just about anyone can die. And then Mina (damsel in distress of the first book), takes on the "Lucy" role, being the first to fall prey to Dracula. It keeps you guessing longer than any adaptation of Dracula normally would.

One cannot fault Hammer Films for their production values, either. Although some sections are obviously filmed on sound stages, everything feels lushly designed and populated. Scenes are well composed, with enough worn furniture and random knick-knacks to make the various scenes feel "lived in". Many sets are populated by random characters who help to breathe life into surroundings (such as the Klausenberg tavern, which is full of people, even if only two of them have any actual lines). Costumes seem rich, with furs, velvets, and lace (plus the now-well-worn trope of many, many billowy negligees). The film may have been done on a smaller budget (Ł81,000), but all that money is very obviously on screen.

Of course, most importantly, the Dracula here is unlike other famous Draculas from the silver screen. Christopher Lee makes an effective, menacing villain -- aided by the fact that he has so few lines (13 total, to be exact). This Dracula doesn't need words when he can draw you in with his eyes... and then rip your face off. He's motivated not be a desire to see the world and find a new locale to set up shop, but revenge -- revenge against those that invaded his castle and killed his previous vampire bride. He's not a Dracula to be messed with. 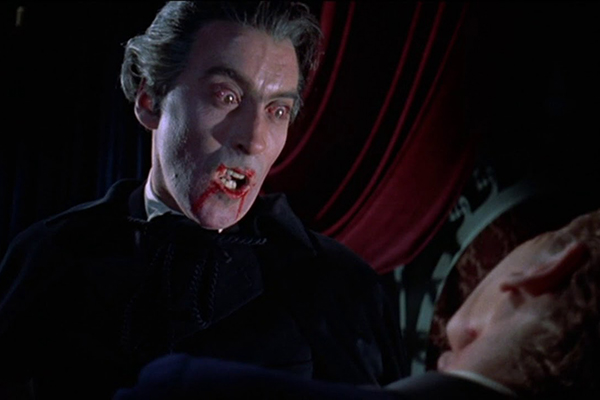 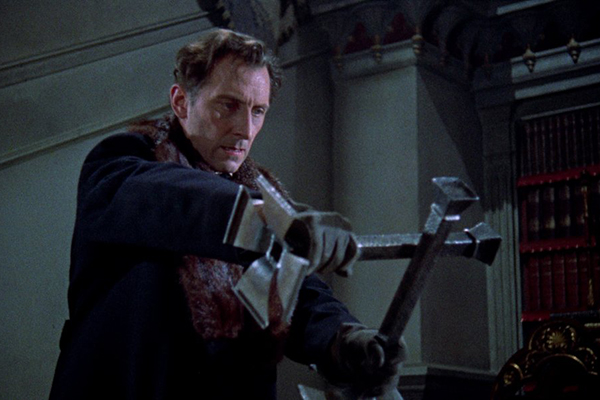 Sadly, the glaring flaws of the original story do still come through. Dracula always seems to like to take his time converting a woman over to vampirism, and when he's not around, the woman is just expected to go on with her life, as if no one will figure out that she's becoming a vampire (despite liberal amounts of scarves, high-necked dresses, and the occasional awkward glance whenever the name "Dracula" comes up). All this despite the fact that he knows vampire hunters are after him, has already confronted one, and turned the vampire hunter into a vampire in less than a day. I get that sometimes you want to savor the little moments in (un)life, but Dracula maybe should think about hurrying occasionally before the jig is up.

The movie is also a bit slow in parts, although this is largely due to the era it was filmed in. Earlier movies have a noticeably slower pace, a convention of the time period to be sure, but modern audiences may be turned off by a more sedate film. Plus, despite this being a "horror" movie, the modern viewer isn't going to find a lot of scares in the Hammer Dracula. Back in the day, maybe seeing a woman open her mouth wide to reveal long fangs was scary, but now it take more than menacing eyes and a brutal hickey to get the blood pumping.

And yet, it's hard not to admire what the movie gets right. Dracula 1958 is a more engaging, more interesting film than its 1931 Universal brethren, and a good watch for anyone, vampire fanatic or just a casual fan. It's an effective, interesting movie, and despite the leeway it takes with the Dracula story, it makes for a great entry-point into Dracula cinema.