Lust for a Vampire 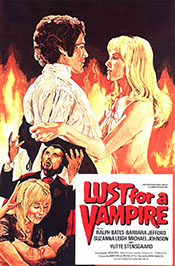 In the tradition of Hammer vampire sequels, the movie begins in a dark and dust castle where the servants of evil (read: The Devil) are working to raise their fallen vampire lord... or, in this case, their vampire lady, the Countess Carmilla Karnstein. Killed 40 years ago (in the previous movie, The Vampire Lovers), the servants of evil want Carmilla back in the world to spread the vampire plague around. So they bring her back with a virgin sacrifice and, boom, Carmilla resurrected (looking different that in the last movie as she was recast into Yutte Stensgaard).

With Carmilla back, they put the "young" vampire lady in a school with other girls, so as to explain why a young woman (previously unseen in the countryside in recent memory) is now wandering around on her own near Karnstein castle. Soon, though, the vampire is up to her old tricks, feeding on the students and sowing evil and discord. Meanwhile, there's also a new teacher at the school, the writer Richard Lestrange (Michael Johnson), and he's instantly fallen in love with the young Mircalla (ne Carmilla). Will he be able to find eternal love and life with his vampire lady, or will the villagers figure out that the evil Carmilla is back from the dead and kill her before it's too late?

With the success of their first Carmilla flick, The Vampire Lovers, it was only a matter of time before they made a sequel (an, in Hammer time, that kind of turn-around was quick). A year later it's sequel, Lust for a Vampire came out, but while the first movie was a decent vampire flick featuring the relatively rare female villain, the follow up was a much lesser affair.

The first issue is that Lust doesn't really tread any new ground. In the first go-round, Carmilla shows up (under some pseudonym), feeds on the daughter of a rich baron, and then is eventually killed by angry villagers. Then, this time, she's back from the dead, only to be placed somewhere (under a pseudonym) to feed on the daughters of rich barons. We already saw her do this once before, and the fact that rich barons keep placing their daughters near the Karnstein Castle speaks less about the evil of vampires than it does about the stupidity of the nouveau riche. 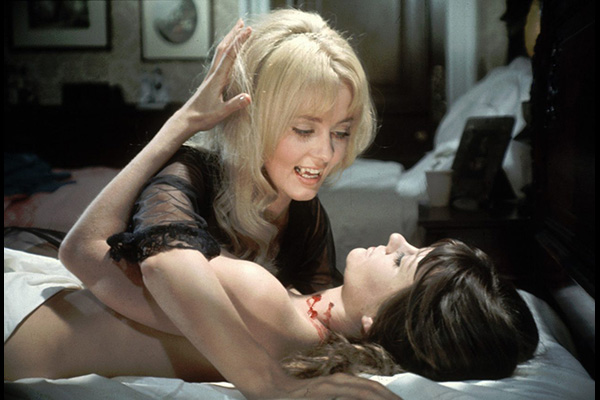 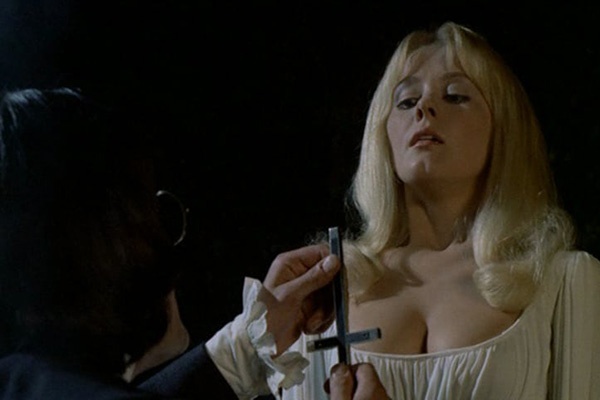 Plus, in this movie Carmilla is even less of her own agent than she was before. Hell, little of the movie is about our vampire lady, instead focusing long spans on the new write/teacher at the school, the murder mystery of a young girl Carmilla ate early in the first act, the troubles at the girl's school, and so many other odd little half plot-lines (did you know, or care, that one of the teachers is a student of the black arts, because if you didn't don't worry about it -- he dies early on and no one really cares much afterwards). It like the producers introduced the young vampire early in the story, got all the nudity they could out of the way (and wow, is there a lot for a Hammer film), and then decided no one really was there for the vampires (or the nudity) and tried to fond something else to build the story around.

Like in The Vampire Lovers there is a fair bit of casual nudity from the female cast early on. But the nudity in Lust for a Vampire is even less artfully done than in the previous flick. Hell, so much of the movie less artful this time around. To describe the production as "workman-like" is to give it too much credit. The direction is boring, with characters largely just wandering around and saying lines without much feeling or emphasis. If these were famous actors giving these performances we'd say they were just there for the paycheck, but here these aren't famous stars so, presumably, they were really trying. And yet few of them give any kind of performance worth caring about, and presumably that's because the director either didn't give them much direction or simply liked what he saw and told them to do it "just like that".

But then the shoddiness of the production wasn't limited to the acting/direction -- the cinematography is also pretty bad. Long, slow pans bump and roll at weird angles that are less "artful cropping" and more "obvious, unintentional stumble". Long, penetrating shots into characters eyes go on and on, then cut to another character and their eyes, and back, and forth, presumably in an attempt to cause "vampiric tension", except no tension is created and everyone is just left bored. And wait until you get to shots of bodies falling long distances (or, more specific, laughably "falling" against a black screen) -- the effect is so, so bad.

Plus, the story is somehow both over-stuffed and threadbare. Carmilla is brought back to do... well, that part is never really brought up, but presumably because she's evil and the servants of the devil want her vampirism in the world. Except, as revealed later, both of the servants of the evil are also vampires, and one of them seems to be a more powerful vampire lord than Carmilla (since he somehow has sway over her). So why do they need Carmilla again (other than because the she's the "named" character audiences will know)? And why does the new teacher instantly fall in love with Carmilla? Sure, maybe because she's got powerful lust powers, butt hen why does she instantly fall in love with him in return? And then another teacher falls in love with our young, male writer, despite them having, like, no scenes together. So, what's going on at that school? 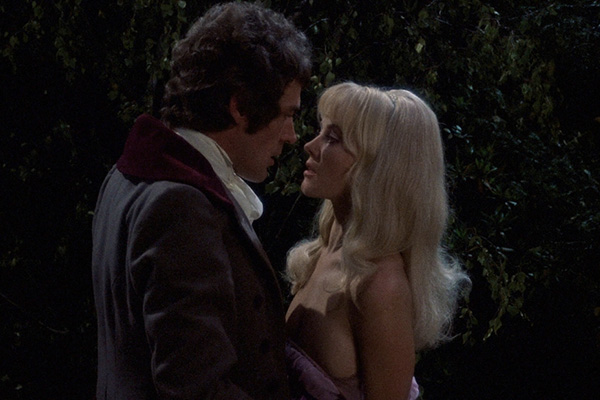 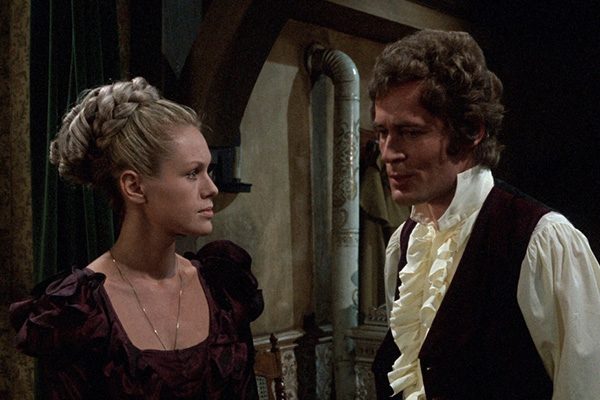 And, really, wasn't Carmilla gay? Sure, the rating's board at the time (as the story goes) told Hammer Films that the sequel had to have less lesbianism in it than the first movie. The problem is it adds a creepy factor to the "romance" between the teacher and the vampire. Well, more so than just the teacher falling in love with a student (which is gross all on it's own). Early scenes between the two are of him professing his "love" and her rebuking his advances over and over again. Anyone that watched the first movie will be creeped out by the "rapey" vibe since, yeah, she's just not into dudes, dude. Then she about-turns and suddenly needs a man in her unlife. Really?

In short, Lust for a Vampire simply doesn't work. The best that can be said for it is that it moves at an okay clip and is over before it gets too boring. It's not anywhere near as good as the first film, and there's little reason to recommend it (even for pure titillation). Skip it and stick to The Vampire Lovers if you need a Carmilla fix.