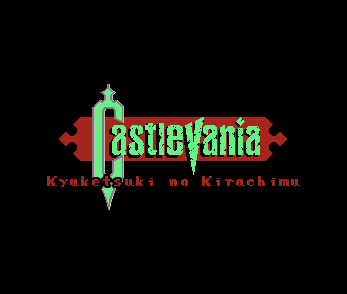 When the Castlevania series switched from the NES to the SNES, the sprite work of the series received a major change. That's to be expected, of course, simply because there were now more colors that could be used on the sprites, both in number usable in a single sprite as well as total number of colors available. But the sprites themselves also became large ad more detailed, meaning that a level laid out in the NES era would be hard to recreate in the SNES era. The games, despite looking the same, are just fundamentally different from that perspective.

That might be part of the reason why so many fan-games end up using the NES-era sprites. It's not only for nostalgia, although I'm sure that's part of it, but also because the sprites are easier to work with and allow for my to happen on screen. With sprites that are half-again as large there's just less you can do with the screen real estate whereas the tiny sprites of the NES era grant so much more room to do all kinds of stupid things. And sometimes a dev comes along and decides to gloriously do all the stupid things at once.

Created (and, as of last report, still currently maintained) by developed SpiritMouse (who, as of this writing doesn't seem to have a website in support of this game), Castlevania: Kyuketsuki no Kirachimu looks, upon first loading, like a fan-sequel to Castlevania II: Simon's Quest. You start off in a town with the villagers giving you clues as to where to go and what to do. That first impression, though, quickly fades away as you make your way left (as per the clues) into the nearby marsh. Soon, you've grabbed a knife and are flinging dozens of them at once while wave after wave of enemy streams at you.

This is a game that dresses up like a Castlevania but then takes a hard-left turn and decides to do its own thing with the basic mechanics and assets of the series. The developer calls it an "retro co-op arcade" game, and yes, that's true. But it's more like if Castlevania: Harmony of Despair and Gauntlet had a retro love-child. It might be a side-scrolling platformer but its more of a run-and-gun shooter with Castlevania series. Frankly, it's unlike any other game in the series (official or otherwise) I've played. 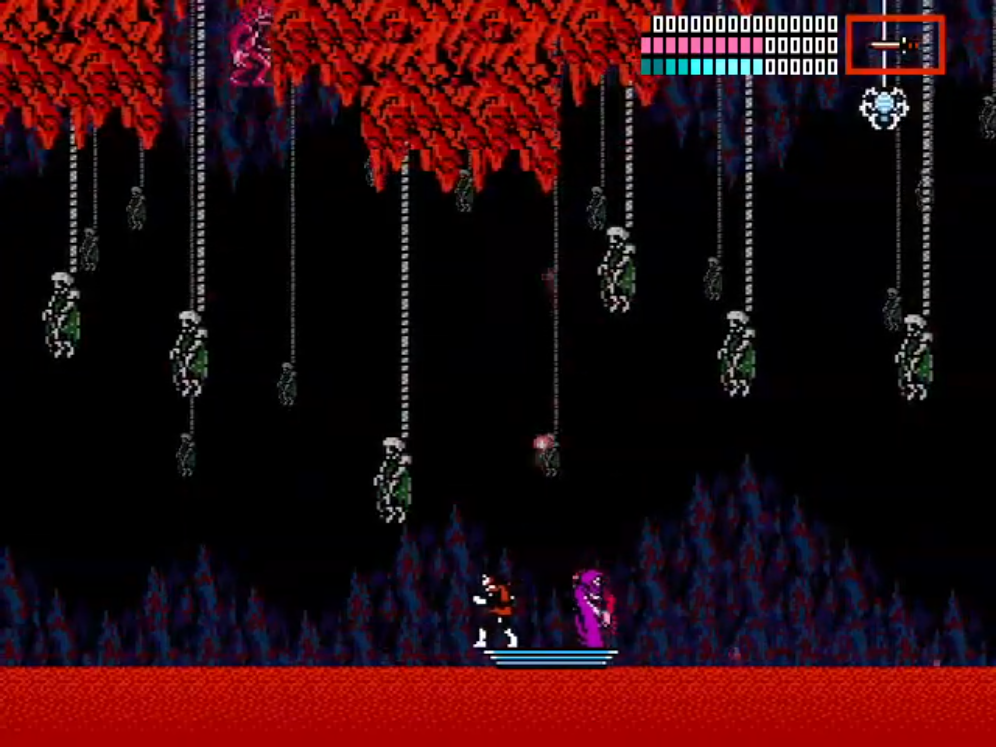 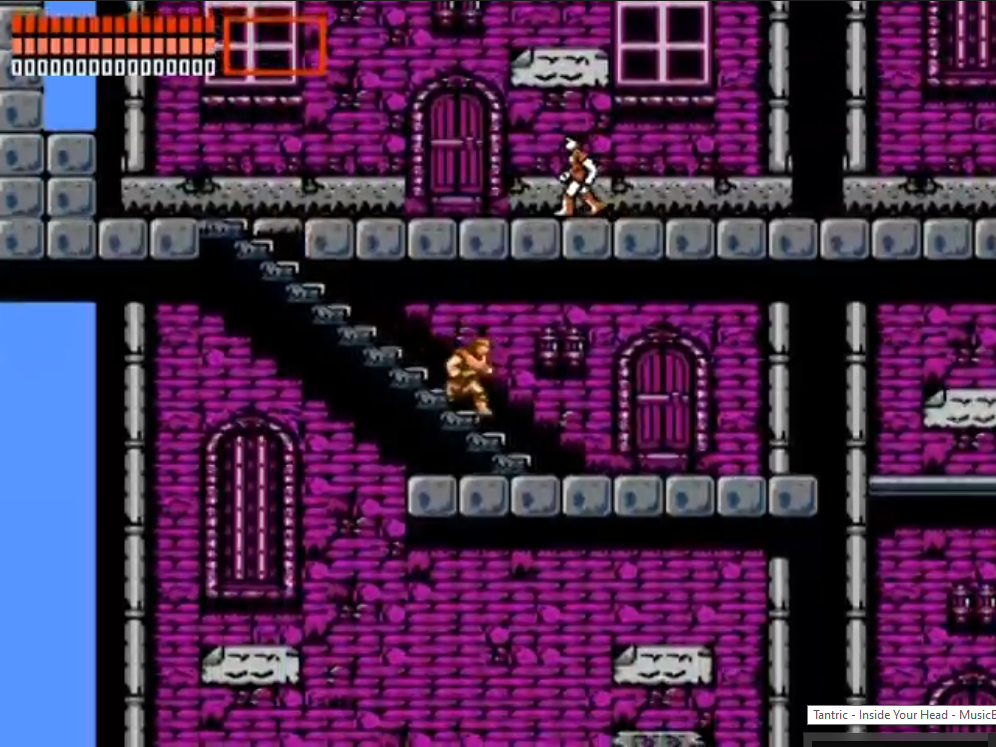 To the game's credit, it finds so many ways to push what the series can do and toy with the expectations of the player. Once you get out of the starting town and begin exploring, you'll notice all the nice upgrades the games has gotten. It may use 8-bit graphics but there are multiple layers of parallax scrolling. It gives a wonderful impression as you move across a stage and see the sun slowly move in the background as tress pass in front of mountains, all while you're taking on dozens of enemies at once. It may be retro in aesthetic but it still has a bit of wow factor to it.

Of course, the fact that you're taking on dozens of enemies at a time might distract you from all the cool little touches the game puts in to the graphics. The enemies in the game are relentless, redefining the term "spam". You'll end up seeing packs of them waiting for you at the top of the stairs, more spawning in from the side, and even more throwing fireballs at you at once. The game never slows down during them (another benefit of the simpler graphics, I'm sure), which shows another reason way this is a modern game -- even half the number of sprites on screen would have caused the NES to seize up and start flashing. It's insane.

Not that the game is unfair, per se. While the enemies come at you hot and heavy, and you'll be constantly taking damage sometimes, most of the enemy attacks are pretty minor. You might lose a brick of health (or less) as opposed to the three or four you'd take from even a minor scrape in any of the classic games of the era. The developer knew what they were doing and to balance out the waves of enemies they let the heroes (playable as either Simon Belmont or Trevor Belmont, or together in full co-op) shrug off most damage (without even flinching) while continuing to pour out the damage themselves.

Your hero can seriously spew out constant sub-weapons, using the traditional weapons such as the dagger, axe, cross, and holy water. It's really fun melting a boss, like Dracula, when they get near the ground and you can just pour the holy water on. Items can be swapped at any time with the press of a button, and the heroes will need to wisely use all of the weapons and items at their command to take on the bosses. This, coupled with Metroidvania-style items to collect as well (like Dracula's Nail, which lets you climb walls) means you'll be exploring everywhere for the next secret, the next mansion to enter the next item you'll need to make you even more powerful. 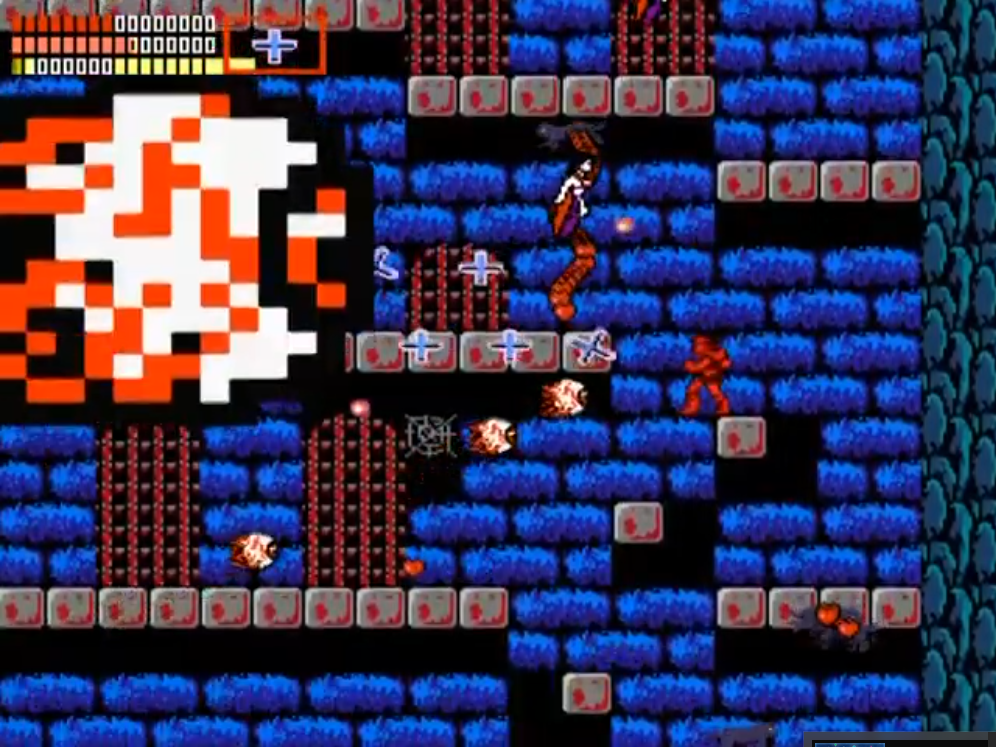 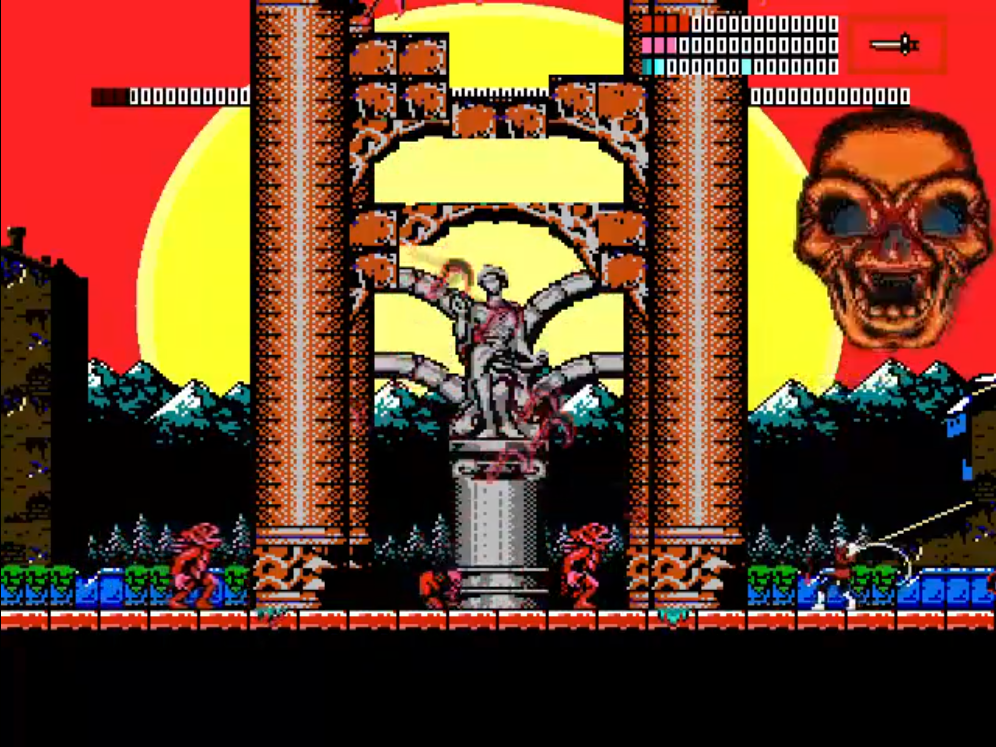 You will need these items to assist you because the game becomes pretty brutal in the back half. The enemies spawn in greater chunks and the bosses get relentless. The first time you see the craziness, like when four Carmilla masks come on screen at once for a boss fight where you have to kill them all, you get a feel for the truly demented nature of this game and its combat. This game will test the skills of most players, but when you get past a nasty boss it does feel pretty sweet.

And, even if you're struggling there's almost no penalty for dying. You get to keep all your items and weapons, and you just spawn in again at the last checkpoint with most of your health and hearts restored so you can try again. It's forgiving and hard at the same time, and interesting mix that works in this game just because of the way it was made. Of course, by the time you get to the final boss and his four forms you might just be cursing the game... but then you'll spawn right back in and try again because you're already hooked and just can't stop.

I really enjoyed my time in Castlevania: Kyuketsuki no Kirachimu. I've said, over and over again, that I want an experience that feels fresh and interesting, something new that still, at its core, maintains the basics of the Castlevania experience. This game does just that. giving me the Castlevania feel while still managing to defy every expectation I had. That's a real advantage for the game and helps it to carry it strange package far into the play through. This might not be a standard Castlevania experience, and that might turn some fans off, but I found it to be a breath of fresh air. If only Konami could get this creative with their games.