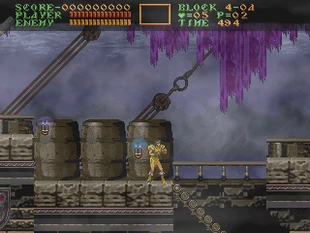 It's sad to say but not every Castlevania fan project reaches completion. If you go hit fan sites you'll find people discussing all kinds of "in the works" projects, many of which never get farther than a few screen shots and a lot of talk. It's rare to get a full game out into the world, rarer still for it to be any good.

Castlevania Chronicles: Dracula's Curse certainly had the makings of what could have been a stellar fan-game/remake of the original Castlevania III: Dracula's Curse. While normally we wouldn't cover canceled fan-games (specifically because fans love to talk about the projects they "plan" to do, but actually having the follow through to do it is something else altogether), but in the case of this game, the product was far enough along, with a full demo released, that there's enough meat here to really get into the game that could have been.

As the name implies, this game was going to be a proper remake of the original Castlevania III. Although it's possible some bonus content could have been included (there's some reference to a Maria mod that was in the works, although I can't find any physical trace of it Online anymore), the meat of the game would have been a full and true remake of the original game. This was a love letter to the third game in the series by a small team of dedicated fans (spearheaded by current Castlevania Dungeon site lead, and sometimes contributor to this site as well, Jorge D. Fuentes). And it could have been amazing.

As you can see in the screen shot, this game was to be an "SNES-inspired" remake of the original, featuring new (and reworked) art for the whole game in the style of Super Castlevania IV and Castlevania: Dracula X (with some additional assets taken from other games of the era). The resulting artwork looked gorgeous, and all the stages on display in the demo have impeccable design in every sprite and tile.

Playing through the demo you get a sense of what could have been as the game plays flawlessly. Hero Trevor Belmont moves fluidly, with instant attacks and feedback from button presses. The scrolling is smooth, the hit-boxes fair, and everything plays as fairly (or unfairly, as the case may be) as the original title. Sure, not everything works properly in the game and the stages do feel a little sparse when it comes to enemies, especially as you move into the later stages of the demo, but then this was still a work in progress when it was canceled, so that's to be expected.

There are, obviously, some pretty big pieces missing from the game. The Skull Knight is the first boss in the demo and, sadly, at the time of cancellation it was also the only boss in the demo. Although all the other bosses were planned for the game (and I recall seeing artwork of many of them over on the Dungeon forums while the game was actively being made), none of those foes made it into the final title, leaving the end of each stage feeling pretty empty.

Worse, none of Trevor's companions seem to be playable (at least not via any means I could find from my time in the game). While, once again, I remember seeing assets designed and showcased for these characters, these other heroes never made it into a playable version of the game, leaving a key component of the Castlevania III experience on the table forever.

The reason the demo was canceled was, like with so many other projects, due to people leaving the fan project. The original programmer, as I recall, had other life commitments and when they left they took their understanding of how the code was designed (and what needed to be done to finish the project) with them. If you're ever worked with programmers then you know bringing someone else on to finish a project means they basically have to scrap at least half of it just to get the resulting code in a space they can work on it. Spaghetti code is a thing, and the more hands that touch a project (without making it their own) the worse the final project ends up because of all the errors and conflicts.

In the end, then, the game was called off because another programmer couldn't be found to make sense of the basic engine that was designed, and the original programmer just couldn't commit the time anymore to finish it all up. These things happen and they're part of the reason more fan-games don't come out regularly. Still, even if this game had managed to reach the end-point I have to wonder if Konami would have let it exist for long. While the company seems to turn a blind eye to fan-games now (especially as they largely ignore the classic series at this point), back in the day Konami pretty strongly enforced their copyrights and regularly shut down fan projects. A full-tilt remake of one of their classics would likely have been shut down in a heartbeat.

So maybe, in the end, it just wasn't meant to be. The demo is fun to play, and there's certainly a bit of sadness to be had over what might have been, but for the era it was designed, and the game play it promised, this game had it's days numbered, one way or another. Still, if you have a moment (and can get it to work), give the demo a play and enjoy all the hard work that went into it. Even for an unfinished fan game, it doesn't disappoint.