If you play enough Castlevania games, you begin to think that every vampire hunter in the series is the hero of their own game. It's easy to think that in a series populated by Belmonts and Morrises, Belnades and Fernandez heroines. But there have to be other heroes, right? Not everyone that goes to Castle Dracula gets to be the hero. Some of them have to have tried and failed.

While we wouldn't say he failed in his mission -- at least, not if you get the good ending -- Charlie Vincent certainly represents one of the few "also rans" in the series. While a vampire hunter by trade (or, at least, by calling), he's not exactly great at his job. He relies heavily on holy trinkets for protection but he doesn't seem like much of a warrior. He's more of an adviser to better heroes, stronger heroes, while he sits back and provides wisdom and guidance.

It's honestly surprising there aren't more heroes like Charlie in the series, guys that go to the front lines and just slightly miss their chance to be heroes. The world of Castlevania has to be littered with the corpses of failed heroes, but we see far too few of them, all told. Charlie is a rare exception, to be sure. 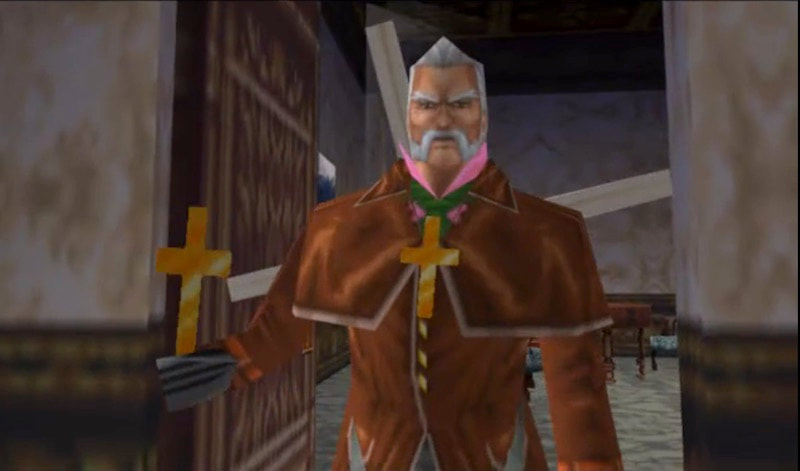 When he's first found by Reinhardt Schneider and Carrie Fernandez wandering inside the Villa of the castle's sprawling estate, Charlie informs the heroes of his calling. He's a vampire hunter, one who has been around for some time, although this is the first real chance he's had to get into Castle Dracula and explore the environs. As man with vast knowledge of the undead, Charlie has spent a long time in books, learning all the secrets to staying alive in a haunted castle such as this.

Unfortunately, by the time he was ready mentally to go to the castle, he was too old to do the job properly, so instead he lends some advise to our two heroes before sending them on their way. He's a guide of wisdom, frail in body but strong in spirit, and he wishes the heroes well on their journey, advising them to keep an eye out for any secrets or lies the vampires may construct to impede them.

That's not the last time the heroes see Charlie, though. As they climb into the top of the castle, past all the dangers Dracula set for them, the come to the Castle Keep where they see Malus. Malus was a small child they'd see earlier on their adventure, a strange and dark child who had been kidnapped by the forces of darkness and dragged to Castle Dracula. Although the heroes had saved Malus earlier, they found it odd to see him there again.

However, it was Charlie, and not either of the main heroes, he appeared and revealed the truth. Malus was actually the host for Dracula. Tearing the veil away from Malus's illusions forced the vampire to reveal himself, leading to a fight between heroes and villain for the fate of the world. Thankfully, with Charlie's quick thinking, the heroes actually are able to take on the true form of Dracula and defeat him, once again sending his dark evil back from whence it came.

Of note, Charlie Vincent shows up not only in the Nintendo 64 game for the series, but in its "Director's Cut" re-release in Castlevania: Legacy of Darkness. He takes the same place in that game he did in the original, as a side character in the quests of Reinhardt and Carrie. He doesn't show up in Cornell's quest.

Also worth noting, if you take too long exploring the castle -- longer than 16 days before reaching Dracula in Castlevania 64, 11 days in Legacy of Darkness, Charlie will get turned into a vampire by Gilles de Rais, forcing the heroes to fight him near the top of the castle. This will then in turn lead to the bad ending as the heroes will fail to see through Malus's illusion and fail to kill the real host of Dracula. Oops.

The battle against Charlie really isn't all that difficult, making it something of a let down if this is the last battle you face in the game (because you got the bad ending). His arena isn't big, but he doesn't really do much either, so avoiding damage is pretty simple. He has two primary attacks, either grabbing on to the hero to bite them (and cause vampirism) or throwing unholy water that will burn the ground, damaging the hero (and cause Curse status). But his range is limited so a hero with ranged weapons (or Carrie's magic missile primary attack) can defeat him easily just by firing away and running around the room. Reinhardt has to work a little harder if he doesn't have a sub-weapon, but Charlie can easily be controlled, caught in a damage loop if you whip him from a distance. All in all, Charlie is a fairly pathetic fight. A sad end of the glorious vampire hunter in this bad ending.

Charlie Vincent is clearly named after the two lead characters of Fright Night (as well as it's sequels and remakes): Charlie (or Charley) Brewster and Peter Vincent. It's a nice nod to those movies, but one that plays in line with the references the movies also dropped for Universal Pictures and Hammer Films.