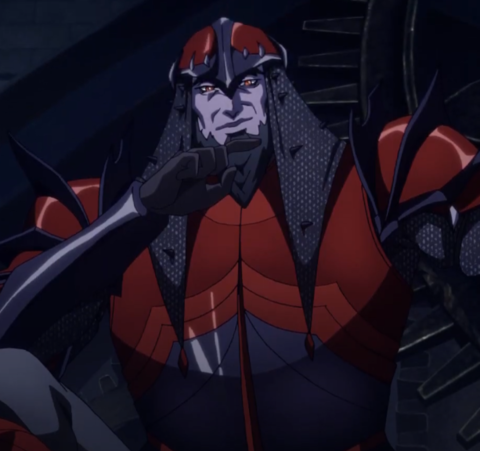 The fourth season of the Netflix Castlevania series consisted of three main storylines. The first took place over at the court of Carmilla and only loosely connected to the rest of the show. The second saw the adventures of Trevor Belmont and Sypha Belnades as they followed the activities of various Dracula death cults that wanted to bring back the evil master vampire. These death cults, whether misguided or actually acting with a specific purpose, seemed to function away from the main story. But, in reality, there was a greater purpose to their actions.

This was made clear in the storyline following Alucard. Here, the half-vampire went to rescue a village, Danesti, that was being attacked by the Night Creatures once under the control of Dracula. It seemed that a new vampire lord, Dragan, had taken control of the armies of the Dark Prince and was using them to terrorize the countryside. Alucard aided the villagers and then took them back to his castle (which was really the ruins of Dracula's castle sitting atop the ruins of the old Belmont estate), the group pursued by Dragan's armies.

Although Dragan seemed to be in charge, in reality this whole this was a plan orchestrated well above his pay grade. Dracula might have been dead but Dragan was still a willing servant and vassal of the Dark Prince. The goal was to cause enough carnage and death at Castle Dracula, which was why all the villagers were driven there. Then their deaths could be used to fuel a dark ritual that would, in some form, bring back Dracula on the mortal plane. The plan wasn't Dracula's though, it was orchestrated by an even older and more powerful vampire: Death. The Grim Reaper wanted the carnage caused by a resurrected Dracula so that Death could then feed on the dead and lost souls.

Whether Dragan served Death or Dracula really wasn't made clear. Whatever the case, he was a willing participant in the whole proceeding, guiding the armies and then, when the main battle was over, directly taking on the heroes to slow them down so the ritual had time to work. Dragan probably thought he could defeat all three heroes on his own; he was a powerful vampire that had slaughtered thousands before. However, the three heroes were more than Dragan had ever faced before and, despite his immense power, he was handily defeated. His delay didn't even stop the heroes from eventually completing their quest, going on to halt the resurrection of Dracula (at least as intended) before defeating Death and ridding the world of his scourge.

Arguably, then, Dragan, for all his boasting, was little more than a speed bump. Despite his seeming important, he was just a side note in the overall story of the season.