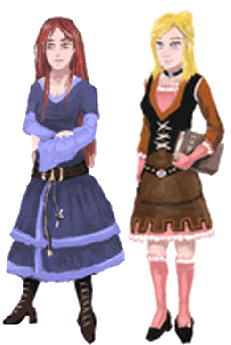 For a while there, Konami did not lack for ambition with the Castlevania series. They wanted to get the series out to as many gamers, on as many consoles, as they could. They not only regularly created new tiles in the main series, crafting new titles in their Metroidvania line, but also trying to get older titles on mobile phones as well. This eventually culminated in the bit-of-both game, Castlevania: Order of Shadows, a title designed for mobile phones but created in the Metroidvania genre.

Well, more or less. That title, while seemingly okay for a mobile phone, was hardly the rousing success any Castlevania fans were looking for. It's story, and its characters -- from lead hero Desmond Belmont to primary antagonist Rohan Krause -- were quickly forgotten, cast aside from the main continuity, never to be see again. That includes two of the additional characters thrown in, Desmond's sisters Dolores and Zoe, worthy female characters that probably should have been given their own game eventually were they not mired in this trashy mobile title.

What's interesting about these two is that they're worthy Belmont heroes in their own right. Before the game even gets going, these two have charged off into the castle of the Order to find out information and help to stop the evil Rohan. Hell, the game even notes that Dolores can swing the famed family whip, the Vampire Killer, with proper Belmont skill. If anything, it would have been fun to have an adventure with these two, something on the order of the mode given to Stella and Loretta Lecarde in Portrait of Ruin. Not that a mobile phone could have handled such a complex mode, not when this game was released at least.

I wouldn't say it's a disappointment that this game never had a sequel, especially once starring these two fine, upstanding ladies -- Order of Shadows is trash, after all -- but there's some weird parallel universe where these two got their own game and, deep down, the editors of The Inverted Dungeon really want to live in that universe, at least long enough to play that potentially interesting title.