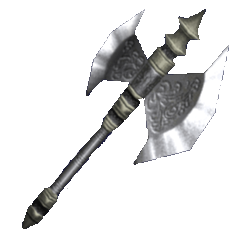 When the Castlevania series started, it's weapon selection was limited. it featured one man, Simon Belmont, going up against the forced of darkness with just a whip and a few things he could throw. One of those throw-able weapons, which he could find scattered around the castle, was the axe, a overhand weapon he'd chuck with some confidence (before watching it plummet the ground after).

Every item from that first game has reappeared in the series throughout, with the axes being a mainstay (and often favored item among pro players and speed-runners). The classic weapon is strong, with solid range and usability, even if it does sometimes get outshone by other throw-ables the heroes can collect in their various games.

It is worth noting that the throwing axe is a different kind of weapon from later axes in the Metroidvania titles in the series. Those games introduced the great axes, a melee weapon with a slow, overhand swing. While these weapons are both, ostensibly axes, one is only used for throwing, the other only for close melee, making them very different beasts in combat.

In most appearances in the series, from the original Castlevania onwards, the axe has operated in a very specific way: it is thrown, overhand, by the hero, traveling in a wide but defined arc, before leaving at the bottom of the screen. Collecting double- and triple-shots would allow the hero to throw multiple axes at once (at least until the these double- and triple-shots were phased out in later entries, instead letting the hero free fire as desired). This behavior is so common that it's easier to talk about the games where this isn't the behavior for throwing axes. 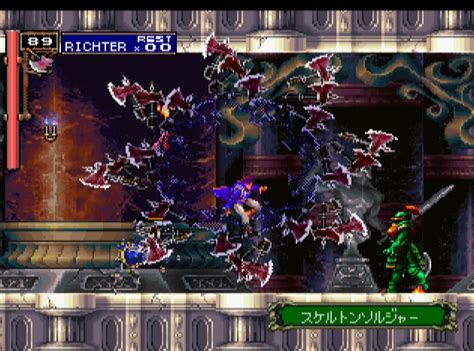 The first time the axe didn't travel in a normal arc was in the Castlevania. spin-off/MSX remake Vampire Killer. There, the axe functioned like the boomerang, traveling out in a horizontal direction before changing course and following back along it's path. This is the same behavior found for the axe-like soul Spinning Edge in Castlevania: Aria of Sorrow (although the axe soul in sequel Castlevania: Dawn of Sorrow returns it to its classic behavior).

Hero Richter Belmont had his own powerful ways to use axes. Although his normal axe throw appears like the standard, arcing use, he could also charge up the axe for a more devastating attack. Due to his ability to "item Crash", Richter could spend a good chunk of heart ammo, leaping in the air to deliver an axe item crash. Multiple axes would fly out from him, orbiting around him in a wide circle before traveling outwards. It's a very powerful attack that, against the right bosses, can even drain away nearly half their health in a single, sustained attack.

Finally, in both Castlevania: Harmony of Dissonance and Castlevania: Lament of Innocence the axe can be combined with various spell books and orbs to create powerful magical effects. The axe behaves otherwise normally in Harmony but it does have a more Vampire Killer-style behavior in Lament (albeit with hero Leon Belmont throwing two at once instead of just one). This same style of sub-weapon also shows up in Castlevania: Curse of Darkness where bonus hero Trevor Belmont throws the tomahawk as his axe-like weapon.