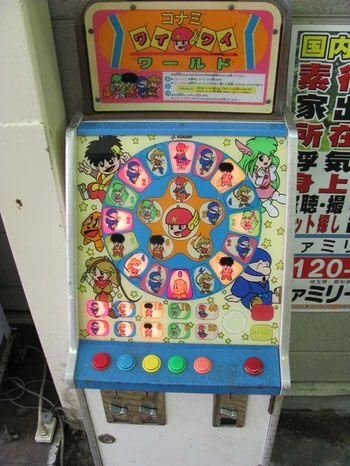 Although the first Wai Wai gambling machine has been photographed and filmed by fans, less is documented about the next gambling machine in the series: Piccadilly Circus: Konami Wai Wai World (Pikaderi Sakasu: Konami Wai Wai Warudo). This one, like the previous title, is an arcade gambling machine where users play tokens/medals to bet on the outcome of the games. Unlike in Wai Wai Bingo, though, this game is a lot less interactive (for what we can tell, at least).

A roulette-style "redemption" machine, the players will put their bets in and then press a button to guess what color/space will come up. These spots include Simon Belmont, among other mascots featured, although don't get too excited -- these are just static images on the face of the machine. giving you about as much interaction with your favorite heroes here as you had in Konami's Mahjong title, Hai no Majutsushi.

Once a bet is locked, the game spins the "wheel" of lights and sound and the player finds out if they're a winner or not. There are seemingly five colors to choose from (with, from the looks of it, the "spin" button, although as we at The Inverted Dungeon don't ready Japanese, that's just a guess). Assuming you can only win on the color that comes up, if you guess right, that's 20% odd you actually will win the game, which isn't exactly great. If you do manage to land a spot, though, there are payouts up to 40 times the tokens placed in, so one lucky spin could net you plenty of tickets.

Frankly, though, this isn't much of a title. It has worse odds than even the most difficult spot to land on a true roulette wheel for worse payouts. Were it not for the tenuous Castlevania connection -- that little chibi Simon on the face of the machine -- this game wouldn't even be on our radar at all. In short, were Konami ever to release a digital collection of their various old-school gambling games, don't expect Piccadilly Circus to make the cut.

Piccadilly Circus: Konami Wai Wai World has no review. You could be the first to review it! Contact the staff of the Inverted Dungeon to contribute.