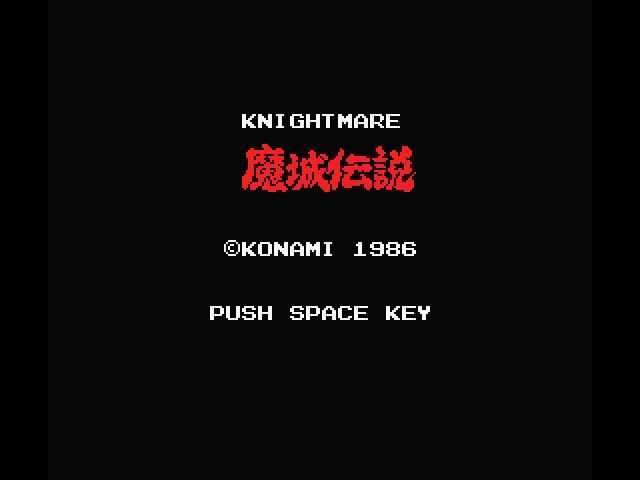 We now get to probably one of the weirder inclusions in our coverage related games with Knightmare: Demon Castle Legend (originally titled Majo Densetsu in Japan). At first glance this game would seem to have nothing to do with Castlevania and, well, you'd be right. We're looking at this game for the legacy of what it left behind more than what this one title managed to accomplish. That said, on it's own this game is kinda fun all the same.

Unlike other games with a more direct connection to Castlevania, Knightmare isn't a platforming game or a kind of precursor to the Metroidvania. Instead the title is a top-down shooter. Our little knight, Popolon, moves along the screen as enemies fly down to him, and he has to take out the waves of bad guys (or, at the very least, avoid their shots) until he reaches the end of the stage. get to the end and you'll face off with a quick boss fight before moving on to the next stage.

As far as mechanics are concerned, Knightmare is pretty simple. Popolon doesn't have much he can do. He's able to free-roam the screen while throwing his main weapons (swords, arrows, boomerangs, or whatever else he's found). When he gets a new weapon (from a glowing orb that he can shoot to change the weapon within) the old weapon he had is gone. Along with weapon orbs Popolon can also collect a shield (which can take a certain number of shots before it dies) that he carries in front of his face, and there are points to grab. There's even a screen-clear bomb he can find and use (but not carry with him), reminiscent of the rosary that would later show up in the Castlevania series.

Functionally the game plays fairly well... at least in all but the scrolling. Game play is nice and brisk with plenty of enemies on screen while little Popolon is running around. I didn't see any evidence of slow-down in the games I played, even with six or seven enemies on screen and all their little pellets going as well. This game was very clearly optimized by Konami to run extremely well on the MSX hardware (a system Konami spent a lot of time developing for, showing their mastery of the system). In all the ways that count this is a smooth and solid experience. 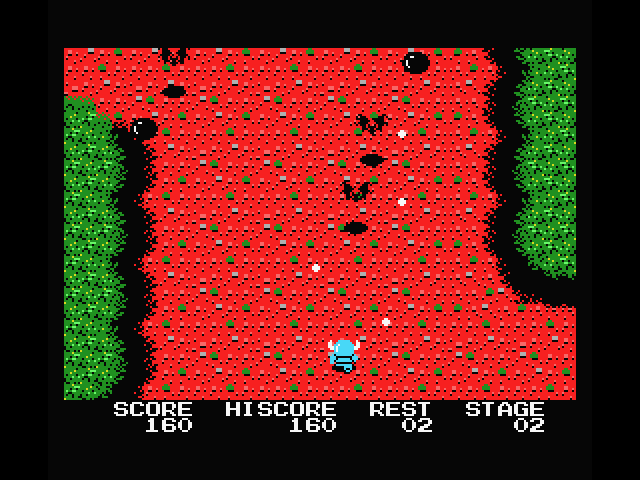 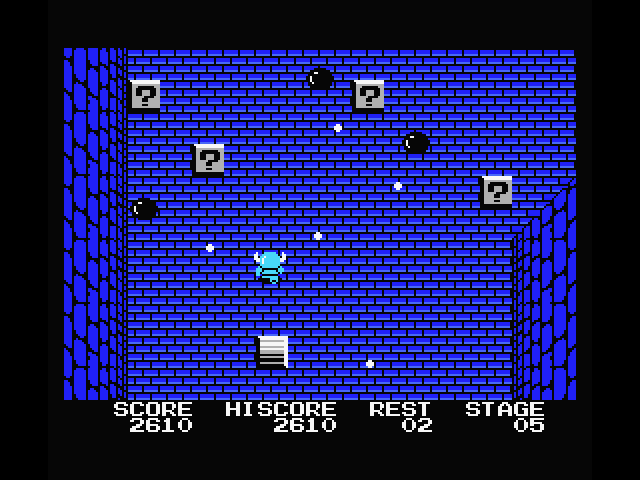 Well, except for that scrolling. The MSX wasn't really built for smooth hardware scrolling, a trait it shared with many early game consoles. Consoles were originally devised to run arcade experiences in the home and early arcade games didn't regularly feature scrolling. All you had to do was present one screen and when the player moved on to the next area you put up a new screen. Of course, as games moved on, hardware scrolling started to be a necessity so game companies had to find away around the MSX's limitations. in Konami's case they went with juttering scrolling on Knightmare and it looks... okay.

There's nothing wrong with the game play of Knightmare. Even as the jutter scrolling happens the play on top is smooth as silk. It's just very noticeable as a graphical effect. I think maybe the game would have benefited from faster scrolling (with longer stags so the mechanical feel of the game was the same) so that the jutter scrolling felt smoother. As it is it's a bit of an eye-sore on an otherwise solid little title.

Graphically the game looks pretty darn nice for an MSX title. The MSX was pretty good at producing NES-quality graphics (sans the scrolling), and Knightmare shows the same creativity and care that Konami put into all their games of this era. It's very obviously a Konami house-style title, from the bats flying around, the bright-yet-Gothic graphics, and all the little touches to the title. You could set this among a bunch of other games of the era and most fans of the company would instantly recognize this work as pure Konami through and through. If you liked the look of their NES fare then you'll love how this game looks as well.

It also sounds pretty solid with two excellent music tracks that keep your feet tapping as you're blasting away at enemies. The one limitation I will note is that the game only has those two tracks, both of which loop after about a minute or so of play (not the mention restarting every time you gab a power-up) so you'll hear same songs a lot, on repeat. Considering the game is at least 40 minutes long, if you know what you're doing, the two songs can start to wear after a while. A couple of extra music tracks, of the same quality as what's already in the game, would have helped a lot. 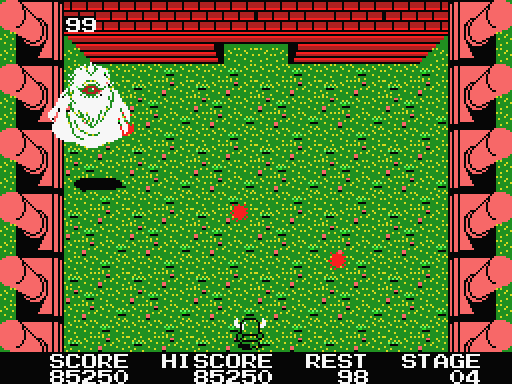 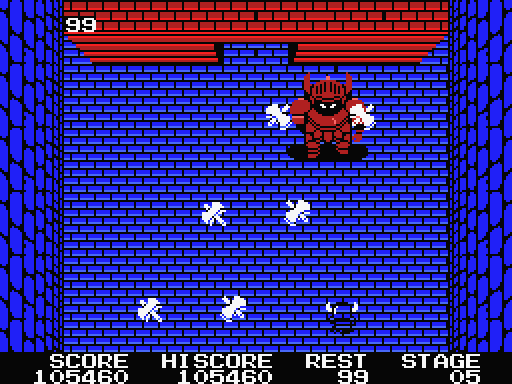 All that being said, this game is pretty solid simply for what it is. More interesting is all the groundwork it laid for latter Konami titles. Not only is there its direct sequel, The Maze of Galious: Knightmare II, which took the world of this game and... went in a different direction (it's a proto-Metroidvania, not a shooter), but then you have all the other game series this game clearly inspired. Theres the top down shooters that Konami would eventually delve into (including parts of the Gradius series), there's the Gothic art style that clearly went into Castlevania. This game has it all.

It's not a perfect game by any stretch, and I will admit that after 30 minutes or so the basic mechanics started to feel a tad repetitive. But for a shooter of the mid 1980s, Knightmare does what it needed to do with aplomb.

Obviously there are two things we have to look at when considering this game in the scope of Castlevania. The first is that it went on to inspired its sequel, Maze of Galious, an early entry in the burgeoning Metroidvania genre to come. While the first Knightmare doesn't play in that genre its very existence laid the groundwork for what was to come.

And then there's the art style of this title which feels like Castlevania in all but name. From basic enemies like bats and skeletons, demons and slimes, plus bosses like Medusa and Death, this game clearly acted as a prototype for what Konami would do int he graphics of Castlevania. Whoever made the first entry in Castlevania saw this game and said, "yeah, like that but side-scrolling." It just works.