While planning your trip through the lands of Castle Dracula, we would suggest scheduling a tip on the pleasure cruise along the count's ghostly lake. Standing on the ship, staring off to the horizon, watching the coast slowly pull away from you, you can get a sense of the peace and quiet to be found floating in the murky waters below. The way the light plays on the water has it's own attractive beauty, and you can watch the mermen swim and play beneath the waves as the boat slowly cuts across the lake.

We would advise you, though, to make sure you can swim. You never know when the captain might pull a bit of a prank and crash the ship, sending all crew to their watery grave. It's all in good fun, though, just a part of the rustic charm for this wondering cruise.

About the Ghost Ship:

Although featured occasionally in the series, the ruins of the Ghost Ship are not a frequent element in Castlevania, especially as the series moved its confines within the bounds o a full-explorable Castle Dracula, the chances to feature the exterior zones of the lands, especially a haunted ship floating on a lake outside the castle, greatly diminished.

Of the few appearances, we begin with Castlevania III: Dracula's Curse, a game that featured so many zones that would later be iterated and remixed in later games in the series. This long area, Block 4A (Route 4), takes place entirely on the Haunted Ship of Fools, going from the docks to the lowers regions of the ship, with a sub-boss battle against Medusa (aka the Snake Man Sentinel in the U.S. edition, due to censorship). From there the heroes would then climb up the masts of the ship before a final battle at the prow against the double trouble of Mummies followed by the Cyclops. It's worth noting that this stage is notorious for its high difficulty and platforming challenges. 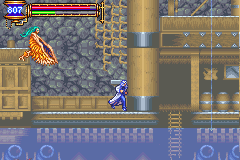 This same setup, from the docks through the body of the ship and then to the upper deck, would be used again in the ship's next official appearance in Castlevania Dracula X: Rondo of Blood in Stage 5 of the game, "The Devil Flies By Night" (aka "Toward the Tower of the Final Showdown"). The enemies are tough here, and the stage does have its fair share of platforming mishaps. Certainly the battle end the end is the real climax, though, a two-phase grueling fight against Death.

We then jump ahead to the Nintendo 64 director's cut release, Castlevania: Legacy of Darkness. This game included a new prelude area, Foggy Lake, which featured an extended ghost ship section (though the belly of the ship and the surface, before crossing along docks to head into the official opening stage, the Forest of Silence. First you have to get past a fight with the Sea Monsters, though.

A smaller section of the ship was included in the first of Soma Cruz's adventures, Castlevania: Aria of Sorrow. The ship, wreckage of it at least, is found in the Forbidden Area, a "secret" area in a casual play-through of the game. The Forbidden Area comes off the Underground Waterway and though it doesn't contain any key items, it does have both a fake-out "good" sword, the Joyeuse, along with the best great sword in the game, Claim Solais (which is hidden behind a breakable wall). Access into the Forbidden Area is the one way to climb up to the back way into the Study, where a switch can be activated and Soma can grab the Ancient Book 1 (if he hasn't already slid into that area from the other direction).

Outside of Dracula's castle, in the Kalidus Channel, heroine Shanoa saw another ghost ship. When first she crossed this zone she could only navigate the surface of the water, being unable to go beneath the waves. She scrambled across the debris of many busted up ships, while a Ghost Ship floated placidly in the background. When she returned later, with the Serpent's Scale, she was able to venture into the caverns beneath the waters, where she found the undead remains of many crews, along with an explorable sunken ship loaded with goodies.

Finally, in the future-set Castlevania: Judgment, the Ghost Ship serves as a playable battle arena, with the combatants fighting it out on the deck of the ship (while against squid acts as a stage hazard, whipping at warriors with its tentacles). This is actually the first stage in the game, in Castle Mode, as you play through.

The Haunted Ship of Fools in Castlevania III: Dracula's Curse

The Devil Flies By Night in Castlevania Dracula X: Rondo of Blood