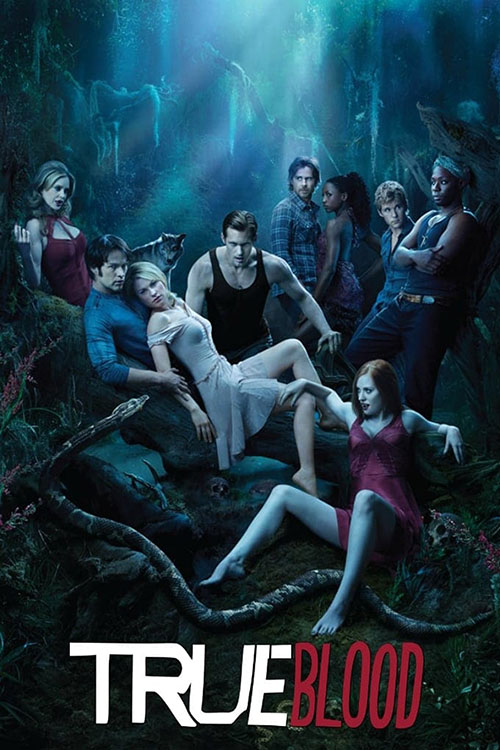 Vampires don't ever really leave pop-culture. There's always some show, movie, or novel series that comes along to keep the monsters roaming around in people's minds. It certainly did seem like there was a boom in vampire tales in the 1990s and early 2000s. There were The Vampire Files, the Anita Blake novels, not to mention your Twilights and Vampire Diaries. And, of course, there were The Southern Vampire Mysteries, a series of books that served as the (at times loose) inspiration for the HBO series True Blood. I didn't get into those books, but I knew enough about them to know that HBO's series would be both a big hit at the time, and pretty terrible as well.

It's hard to see how HBO's series could have truly been good. For starters, The Southern Vampire Mysteries were bodice rippers in a modern setting (not unlike the Anita Blake books). They started off as something resembling real urban fantasy books before quickly leaning into the romance (and sex) between all the characters in the books. Romance novels are big business and being able to tell these kinds of stories to a waiting (and primed) audience while dressing them up as something more certainly can lead to a popular book series. That doesn't mean they're going to be good (and the little bit of time I spent poking at one of the novels bore that out).

Holding the series back, though, was its casting. Oh, the series had a lot of great character actors in side roles, to be sure. It's leads, though, aren't exactly people you'd hold up as the strongest actors in the world. I would say Anna Paquin wasn't going to win any awards, except she actually has, not only for her performance as the lead of True Blood (a Golden Globe, a fact that blows my mind), but also an Academy Award (back in 1994 for The Piano). Here, though, she does seem utterly bored. It's like she put on a brave face and is smiling through something she hates, but hate it she very much does. Meanwhile her co lead, Stephen Moyer, puts one of the stiffest and more tedious vampire performances on screen in quite some time. This coupled with production quality that wouldn't seem out of place on a CW network show, and you have a recipe for a disaster.

Except, somehow, this show became a massive hit (for a time, anyway). It's hard to think about why, except you can kind of see it. It has vampires (and other mythical creatures), mixing it up in an urban world. It does have decent side characters that you legitimately like seeing. And, most importantly, the show has a lot of nudity and gore. For those looking to see these southern-fried vampire bodice rippers committed to the small screen, True Blood provided all the content they were looking for. 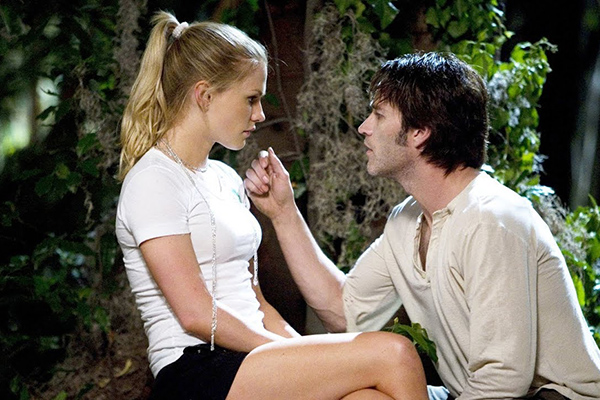 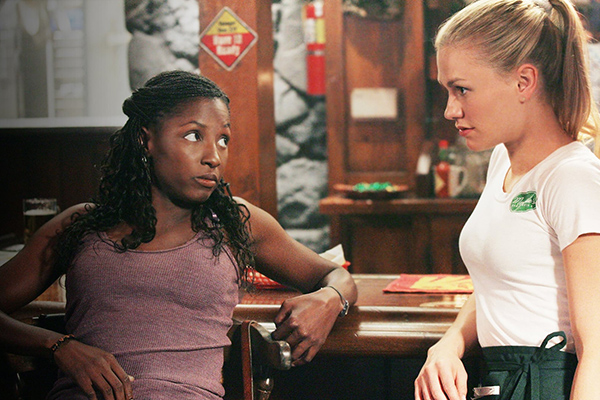 The show tracks Sookie Stackhouse (Paquin), a waitress living (and working) in Bon Temps, LA. Sookie is special, though, because she telepathic. She can read thoughts, whether she wants to or not, but she can certainly use that power when she had to. Her life gets turned upside down, though, when a new man walks into her life: Bill, the vampire (Moyer). Vampires had only just recently "come out of the coffin" (so to speak), with the creation of blood-substitute True Blood allowing them to live among humans without being perceived (more or less) as a threat. Bill moves to Bon Temps to take over the family estate (which was the house he actually lived in, 140 years prior when he was alive), and when he meets Sookie they both end up smitten. He likes her because she's different from everyone else. She likes him, meanwhile, because she can't read his thoughts (which is a massive relief).

What follows from there is one adventure after another. Bon Temps is harassed by a serial killer, but then there are lycanthropes and faeries and all other kinds of threats that seem to come from the small Louisiana town year after year. This will test the relationships of not just Sookie and Bill but with everyone else they know: Tara (Rutina Wesley), Sookie's best friend; Jason (Ryan Kwanten), Sookie's brother; Sam (Sam Trammell), Sookie's boss; and many more. Whether all of these people can stay together (and stay alive), let alone if the town will be standing by the end of the series, is the real question at the heart of True Blood.

Based as the show is on a series of novels, it does have a some things going for it. The overarching stories aren't bad, per se. The first season does have a halfway interesting murder mystery at its core, trying to figure out who is killing women around Bon Temps. When the show leans into its core stories, finding a kind of "Big Bad" plot line to work along, it actually functions pretty well. There are better vampire shows out there, of course, but at least this show had a decently well realized world and some mystery riding along side. That I liked.

And we really do need to compliment the cast of characters that stand around Sookie and Bill. Not just the ones I listed already (who are great), but other solid performers including Nelson Ellis, Chris Bauer, Carrie Preston, Jim Parrack, and Alexander Skarsgard. Not only do these characters make the show (way better than Paquin and Moyer, that's for sure), but I'd go so far as to say any of them would have been more compelling leads. I think if the show could have case Tara's actress, Rutina Wesley, in the lead role the show would have been much better for it. Casting Sookie as Black would have likely caused many of the fans to revolt (as fans are likely to do), but she's a more compelling performer and her version of Sookie could have knocked this show out of the park. 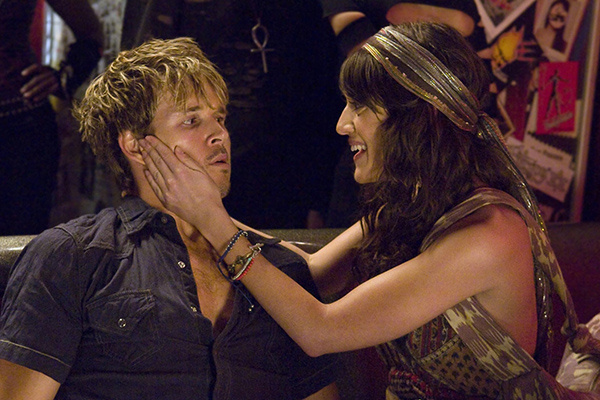 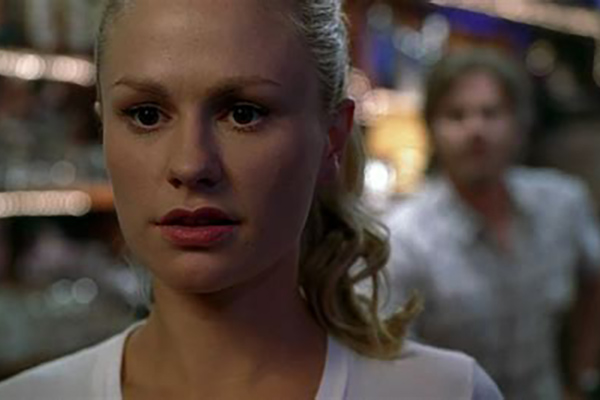 Really, the best thing that True Blood has going for it is its prurient interests. You come for the nudity, the blood, and vampire sexiness. You end up staying, though, for all the side characters and their fun and compelling stories. Not everything in this show works but True Blood gets enough right, at least in its early going, to become a show you can at least sit down an mindless watch a few episodes at a time. Even that wears thin, though, as the show drags on into its later (and much worse) seasons.

Season one of True Blood spends a fair bit of its time on setup, as it needs to. We have to learn not only about the characters on the show, from Sookie on down, but also the world in which vampires get to walk around (at night) just like normal people. Mixed into that, though, is the mystery of Bon Temps's serial killer. This story certainly gives the show its best drama (especially as the story constantly intertwines with hapless patsy Jason). Not as much time is devoted to this story as I would have liked, certainly not enough to make the pay off of who the killer really was pay off properly, but it's a decent little mystery when the show focuses on it. This is an uneven, but watchable season that, sadly, does show many of the base flaws that would come to drag down the series as a whole.

Setup near the end of the first season, second season focuses primarily on Maryann Forrester (Michelle Forbes), a woman who presents herself as a social worker -- one specifically (and intently) focused on Tara, along with another of her clients, "Eggs" Benedict Talley (Mehcad Brooks) -- but who clear has a secret agenda. While Sookie and Bill (and their ward, Jessica) go to Dallas, TX, to deal with a vampire threat down South, the rest of the town is taken over by Maryann while she works to bring about the rise of her Old God (call him Dionysus). This is a stronger season over all, in part because it focuses less on Sookie as "the only character that matters" and instead lets the various people in the town have their own deep, interesting storylines. While I don't think Maryann specifically works as a villain on her own terms, her affect on the town, and what she drives people to do, adds a solid level of horror to the show. A much improved season all around. 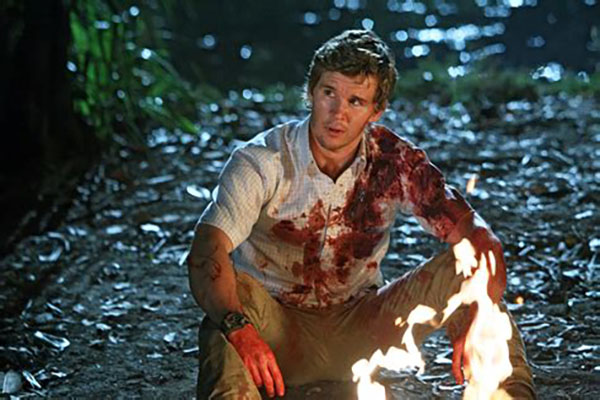 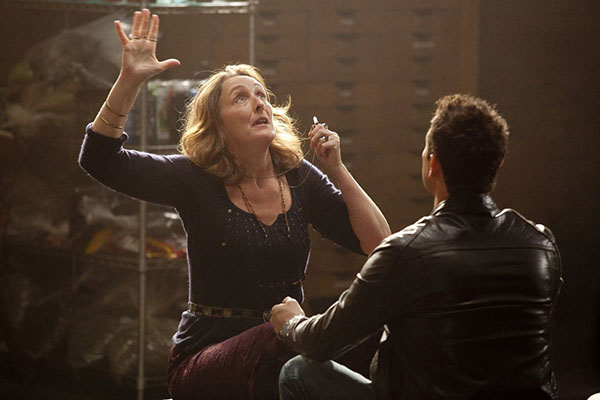 Season three moves the action out of Louisianan and over to Mississippi. Here we meet Russell Edgington (Denis O'Hare), a power-mad vampire with the desire to rule the world. Being a 3,000 year old vampire, he thinks he can take whatever he wants and no one can stop hum (which is not entirely untrue). He's also backed by a pack of werewolves who bend to his beck and call. This makes him a powerful (and charismatic) foe for our heroes to take on. That's the good part of the season. Everything around it though, from the shifting allegiances of the main characters, their messy love triangle, and the way the side characters are just kind of around the story but hardly ever a part of it, leads to a much less involving season. The main story hits hard, but you barely care about anything else (least of all Sookie).

Speaking of not caring about Sookie, though, this fourth season barely gives her anything to do. We get a time jump of a year, and then we're introduced to a new threat: a witch, Marnie Stonebrook (Fiona Shaw), who tapes into the spirit of a dead necromancer, and uses this new magic to wage a war on all vampires. Again, it's a strong main foe, but where the series struggles is finding any way to bring the rest of the cast in so that we care. Sookie is largely sidelined, having sex with a new beau and unengaged from her own show. All the side characters in Bon Temps have their own lives that hardly matter to this main thread. Bill is the only real focal point, and he's a boring character (despite becoming the vampire king of Louisianan). The fourth season feels like a lot of big ideas that, in the end, are squandered by writers that don't understand how to bring it all together. This is where the show truly starts sliding off from its peak creativity.