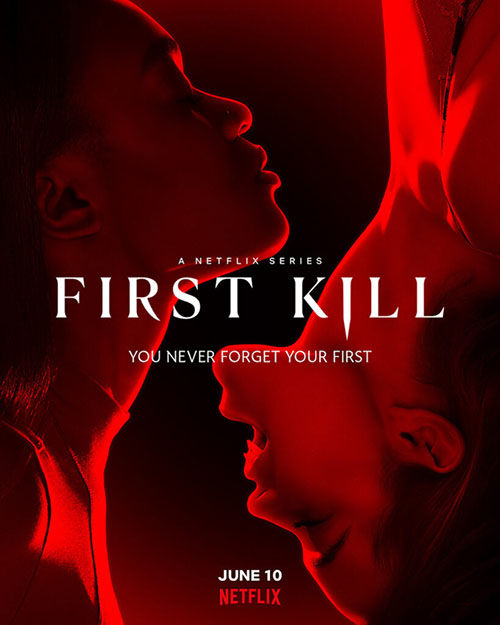 There's a place in pop-culture for both vampires and teen-based stories. The need for blood learning to control your powers, and longingly looking out of windows towards the darkness seems to naturally overlap with the pangs of being a teenager, growing up and dealing with all the hormonal issues that arise. Plenty of shows over the years have mined various angles on that (such has The Vampire Diaries) and fans have generally lapped it up. Vampires plus teenage angst seems like a winning formula.

It isn't always an easy formula to pull off, though, as illustrated by First Kill, a Netflix series that seems destined to consignment at the bottom of its bin, cast aside after a single season even though it also feels tailor made for Netflix. You could see this show getting cranked out by an algorithm: Vampires plus Teenagers plus a dash of Lesbian Lust equals a perfectly formulated show. But while all of those elements are present, plus every other trope you'd expect from a vampire series in the 2020s (like throwing in a snake cult because that idea showed up in From Dusk Till Dawn: The Series), it doesn't really come together in a satisfying (or even delightfully campy) whole.

The show is setup to give us a lesbian Romeo and Juliet story, starting with a character literally named "Juliette". Our Jules (Sarah Catherine Hook) is an awkward teen just trying to make her way through a day of high school. She hangs out with her best friend Ben (Jonas Dylan Allen) while fighting against the pressures of her world -- her parents wanting her to figure out who she is, her desire for the new girl in school. Her being a lesbian isn't one of her big issues, as her family knows all about that, but the rest of the world doesn't know that Juliette (like the rest of her family) are vampires. Elder, master vampires of the distant bloodline dating all the way back to Lilith at the Garden of Eden.

One person that would really have an issue with that is Calliope (Imani Lewis), that new girl in school. Cal comes from m a long line of monster hunters trained by a guild of monster hunters, all set on one thing: eliminating all monsters from the world. Cal is attracted to Juliette, but she also suspects the girl is a vampire and Cal knows what to do with vampires. As she decides if Juliette will be her first kill, getting her into the ranks of her monster hunting family, Jules fights her own urges, trying to battle against the need to make Cal her own first kill. Can these two young women find love together, or will the pressures of who they are, and the needs of their families, drive them apart? 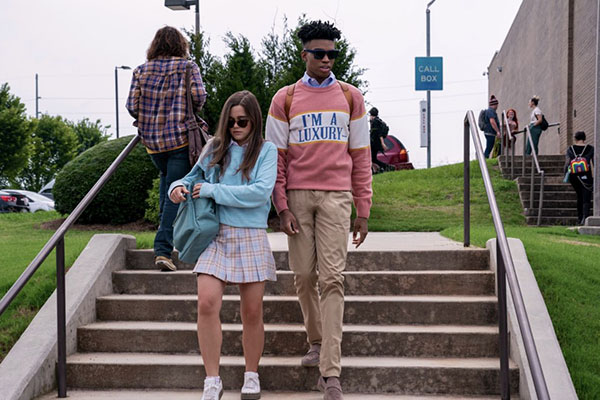 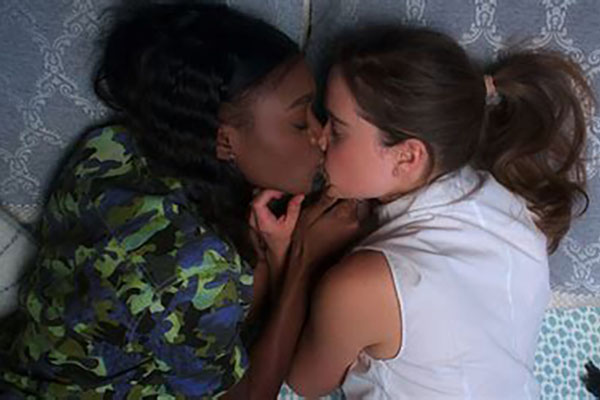 There are things to like about First Kill, but the strongest element of the show is certainly the young leads, Sarah Catherine Cook and Imani Lewis. You really feel the palpable desire from these two actresses, that their characters are irresistibly drawn to each other, unable to fight the need to draw closer. They come from two worlds, which the actresses can sell, but you also get that no matter what happens there is desire (and maybe even love) between them. For a romance show like this, that's a solid foundation to build on.

The show also does a good job of making its cast, and setting, inclusive and open. Juliette is white while Cal is black, but the show never even bothers addressing their races (or making a "point" of pointing it out). Jules is an out and proud lesbian with her family and no one cares while her best friend is out and proud to his family. There are closeted characters, and even some bigots in the town, but in general the show goes out of it's way to not be in the way with its exclusivity. This is where shows and movies really should be, just having an open cast and letting it seem normal and natural.

Unfortunately, outside the two leads (which the show does handle very well) the rest of the series is a mixed back. When it's just focused on the love story between Jules and Cal its able to mine great episodes. It can do a lot of lesbian longing, and decently passionate make-out sessions. But then the show gets "ambitions" and it loses all sense of itself. It wants to be about the characters around Jules and Cal, their own trials and tribulations, and then the spiraling out drama across the town, and the creators just don't seem to know how to do this well.

Take, for instance, the drama within Juliette's own family. Juliette's Mother, Margot (Elizabeth Mitchell) has issues with her own mother, a matriarch that has far too much power over her whole family has she's the keeper of the emerald snake from the Garden of Eden. That snake gives all these Elder, original vampires their power, and with Grandmama in charge, she can dictate rules and policies to her children and their children. This seems like it should be a big deal except then Grandmother gets eaten pretty quickly into the season and the rest of the vampiric master order's politics is left vague and unexplored. 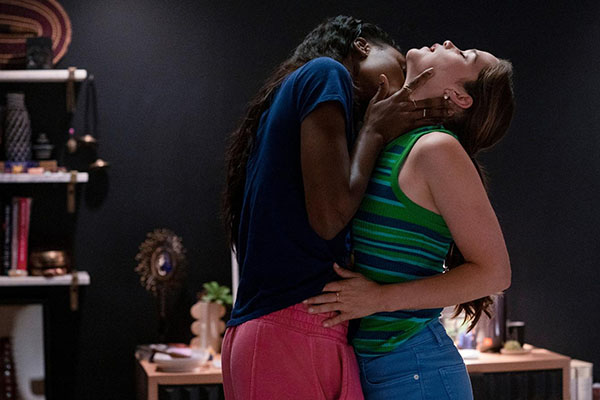 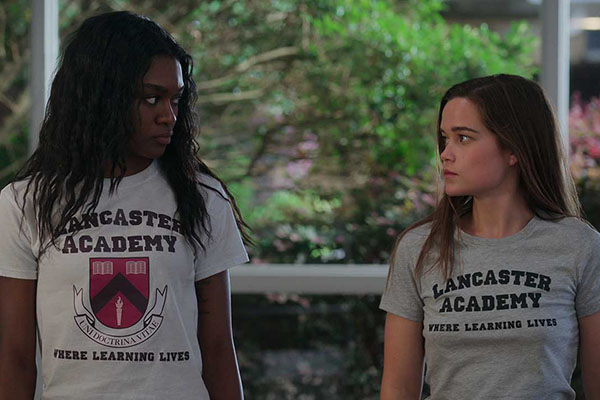 Or there's the problem with Juliette's older siblings, Elinor (Gracie Dzienny) and Oliver (Dylan McNamara). Oliver was excommunicated by the family years earlier for being "a monster", but as we quickly learn Elinor is no better. Oliver comes into town to shake things up and get revenge, but while the actor playing Oliver has charisma, it never feels like the power play between him and Elinor really gets off the ground. He's supposed to be the heavy here but his storyline remains vague and unexplained by the time the season ends.

Meanwhile, Cal's own family drama isn't much better. The guild their a part of, once again, remains severely unexplained and unexplored. Meanwhile, her family members have characterizations that don't remain consistent from one episode to the next. They hate Juliette, but then they don't, but then they'll kill all monsters no matter what, except sometimes they won't. Where the vampires at least are consistent in their convictions, the slayers simply don't have much to do, and even less to stand on, as the season wears on. It's drama from drama sake with them but the show can never consistently explain or define their motivations.

I think the show wants to be too many things at once, with a Buffy the Vampire Slayer character on one side and a cute master vampire girl on the other, plus Vampire Diaries vampire politicking (especially among its "Originals" stand-ins). But as it piles more and more stuff on its threads become more frayed and the solid characters get lost in the shuffle. It gets even worse in the back-half of the show when, suddenly, the whole town realizes there are monsters running around (like vampires) and we end up having to figure out "does everyone already know that monsters actually exist?" because the series never explained that. Really, it doesn't explain anything and just rushes forward, but that just creates a muddled mess that doesn't work at all.

The first four episodes of First Kill are decent, focusing on the two lead ladies and letting their natural charisma carry the show. Once it tries to do any story beyond that, though, the series loses its way. What starts off as a fun and sexy little guilty pleasure runs aground quickly, losing all its steam as it tries to be "more" than what it is. There's a fine thread of decent little romance in here but the show doesn't know when to leave well enough alone and just focus on that. Instead it becomes a tired and muddles mess with a bunch of ideas stolen from other, better shows. I wanted to like First Kill but the show made it very hard to get invested as it wore on. 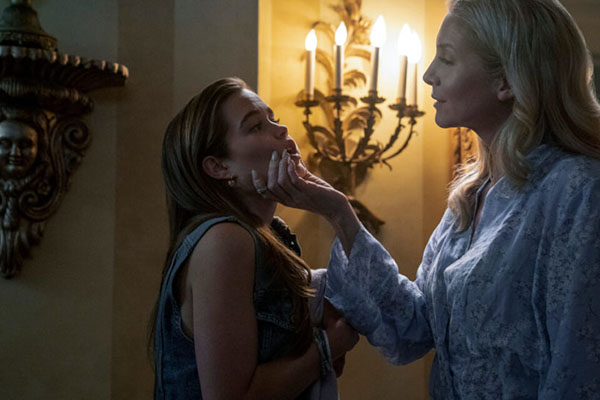 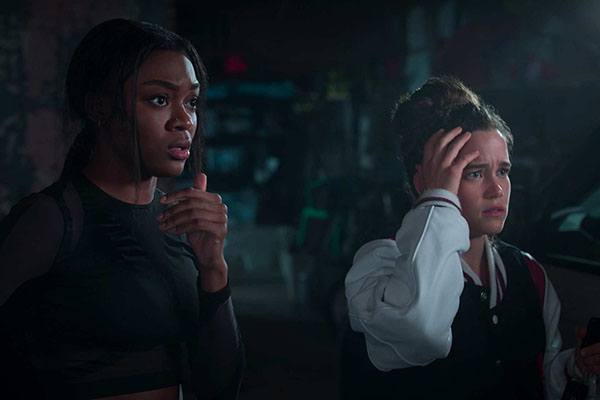 With time, and retooling, the elements of First Kill that work could really build to something. It's uneven first season, though, makes me doubt people are going to stick with it long enough to watch the whole story, and considering how quickly Netflix is to kill things, I'd be absolutely stunned if the show even managed to get a second season at all.