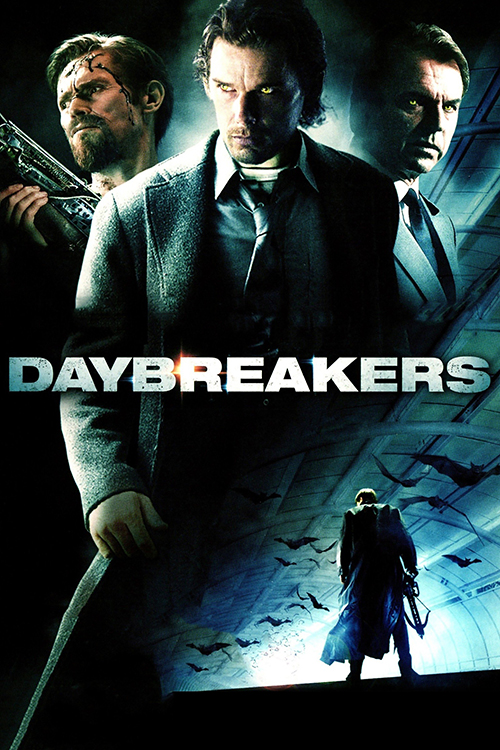 I have a tradition (in years when we're not all worried about a virus spreading across the globe): for my birthday I head to the movie theater and watch whatever terrible genre picture is playing. I was born in winter, traditionally the time when movie studios release the crap they made that they're ashamed of, stuff they don't expect to recoup any money from. For most people this is the dead zone for movie watching, but I love this time of year, largely because I love B-rated horror films. Sometimes I end up watching something truly wretched (like the Keanu Reeves-starring Replicas), but every once in a while a gem manages to appear in these dark times, shiny and new.

The 2010 vampire film Daybreakers was one of these hidden gems. I don't remember seeing much of anything about the film before it came out, I just knew it had vampires in it and looked gory. That's enough for me right there. So, come opening weekend I ended up being one of only ten or so people in the theater for the film, and let me tell you: totally worth it. While it is a low-budget, strange little film it had plenty of what I was looking for: vampires, death, and blood. When you're looking for something to warm your heart in the dead of winter, that's just what was needed.

In 2009 an infected bat caused a plague of vampirism to sweep across the globe. Now, ten years later in 2019, the world is a diseased shell of its former self (and, let me tell you, going back and watching this film in the midst of our current COVID-19 issues, this film seemed more than a little prescient). With so much of the world turned into vampires there are only so many humans left, and their numbers are dwindling. Vampires that don't feed slow turn into crazed man-bat versions of themselves (not unlike the horrifying visage of the Nosferatu). The vampires are going to need a solution -- some kind of blood substitute -- or the whole world could soon be devoid of all of humanity, vampire and mortal alike.

Edward Dalton (Ethan Hawke) is one of the leading bio-chemists working on the blood substitute. In his lab at Bromley Marks he heads up a project to create the substitute... if only it would stop killing the vampires its given to, causing them to violently explode. What Dalton needs is something new, some alternate way of tackling the problem. That's where Lionel "Elvis" Cormac (Willem Dafoe) comes in. Elvis was a vampire, one who worked on daylight conversions for cars (so vamps could drive in the daylight), but then a driving accident during the day caused Elvis to plunge out the windshield of his car, catching fire in the rays of the sun, before he landed in a lake, extinguishing the flames. When he came out of the water he was suddenly cured, mortal once more. If humanity is to have any hope for survival, Dalton has to figure out why Elvis was cured and find a way to replicate it for everyone else, all before the blood all dries up and the vampires become incurable fiends. 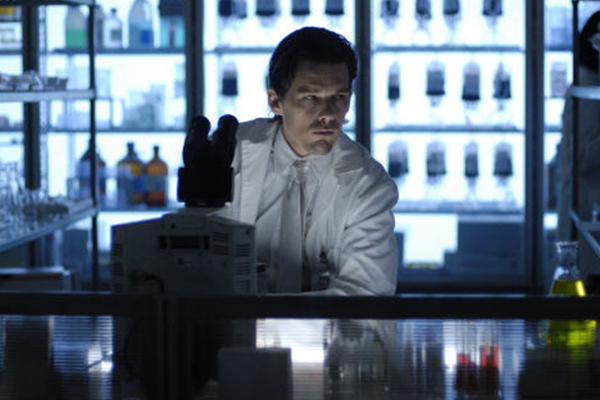 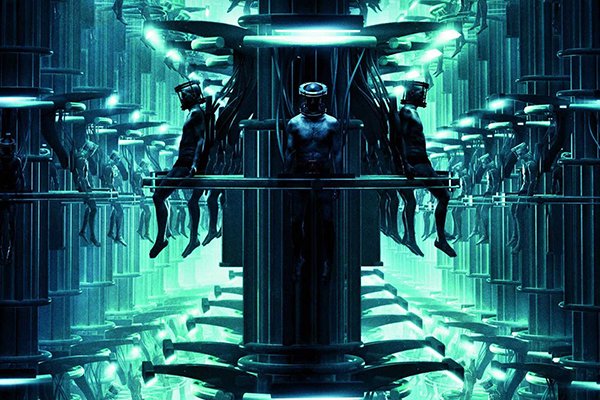 As noted, this film is oddly prescient seeing as how I watched it (and am writing about it) in the midst of a global pandemic. Back when it came out, some of the complaints about the movie were that a plague like this (spread from bats, no less) wouldn't be able to move across the world like it did, especially since its infection vector was close contact with another infected being (in this film, all it takes to become a vampire is being bitten by a vamp). Now, though, seeing how quickly COVID-19 spread, the idea that an entire world could be turned into vampires in the span of a year not only feels quite realistic, I honestly feel like a year was too kind of a timespan. Clearly it could have happened even faster.

There are parts of the film I really enjoy. It has a good sense of its own world, an internal consistency that carries through the film. Once the movie drops you into its story it never lets up, never breaks pace or tries to ham up its sequences. This is the kind of film that can suck you in (no pun intended) and carry you along. And then it splashes gore across the screen, startling you (and, if you're like me or my wife, make you laugh) before diving head first into the next sequence of vampire despair. Its harsh and cold and unrelenting and it really works.

I do like the thought put into the virus, how it changes and evolves people and takes them over if they don't feed enough on blood. The practical creature effects are solid and look really good, and the fact that the movie shows the change in vampires from human looking to man-bats, in all phases, helps to sell the stakes of the blood substitute (and the cure). The film invests heavily in its story and it make the whole plot quite engaging. You get invested in Dalton and his quest to find a way to save vampires and, in the process, all of humanity (as he's one of the few vampires that actually cares about what happens to the mortals in any capacity other than as a food source).

That said, the film isn't perfect. The cure itself doesn't make a whole lot of sense, not in either its initial pitch nor in its secondary form (which we'll get to in a second). The idea that sunlight can burn the infection out of humans is interesting, and in the case of Elvis, where we see him take a long, hot flight through the sun, it makes a certain amount of sense. But once Dalton starts to do controlled experiments, to use a little bit of sunlight to force the body to reject the vampirism, I start to have an issue. This is a virus, and unless it can be eradicated completely from the body, it'll just infect the tissues once more. Elvis getting burned alive is one thing, but Dalton getting a little bit of a tan isn't in the same ballpark (no matter how fiery it might be). 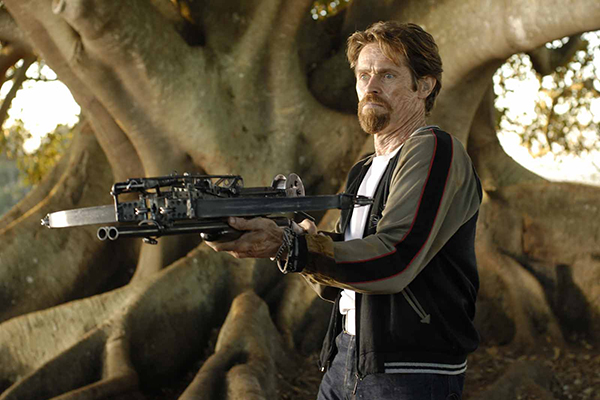 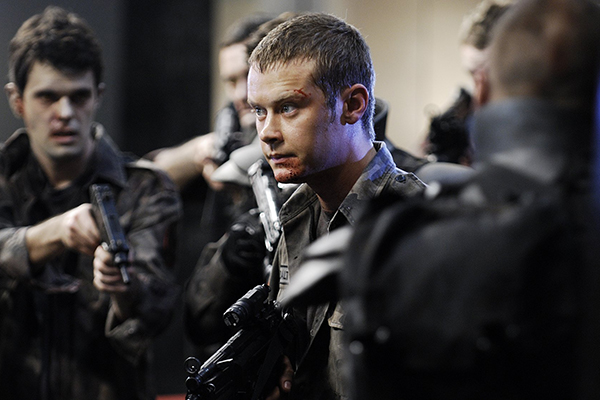 But then we learn (and spoilers for a ten year old movie) that once someone has been cured of the virus they not only can't be infected again (which, okay, that makes a certain amount of sense) but that their blood is also a cure for other vampires if ingested. The first time I watched the film I was caught up in this storyline because it helped to carry through the cure to the endgame. But going back and watching this film again, I have to admit this part loses me. The antibodies at play would have to be pretty strong to be able survive the digestion process, for starters, but also I just don't see how a sunlight-based cured can magically make all blood a complete, 100% cure. It's magical pseudo-science that doesn't quite hold up when you think about it.

Also, seriously, the cure is hugely impractical. You'd have to take cured humans, distribute them around the world, and hope then let them get torn apart by ravenous vampires, all so those vamps can be cured only to then get torn apart by the next wave of ravenous vampires. If you're lucky, a third of the population will survive this way of applying the cure. It's either that or somehow convince the entire world of vampires to willing take short walks into the sunlight because "it'll totally cure you, pinkie swear." I somehow doubt that.

Still, it's a credit to the actors that they sell the hell out of this material, to the point that you only start to really question it after the movie is over. Ethan Hawke is a solid indie film actor who turns in good work in just about anything he's in. He doesn't necessarily play a different character each time -- they're all riffs on Ethan Hawke, really -- but he's good at it. Willem Dafoe, of course, is just a scenery-chewing master and I;m glad he's in this movie. Yes, he's the only person that seems to be having fun in this disease torn world, and he's a bit tonally off from the rest of the cast, but his performance is so good, so engaging, you don't really care.

Daybreakers is a film you watch for its sense of the world along with its characters. It had great effects, a tone of gore, and solid actors working to improve the material. Just don't think to hard about the ending and you'll glide through this film for an enjoyable time.