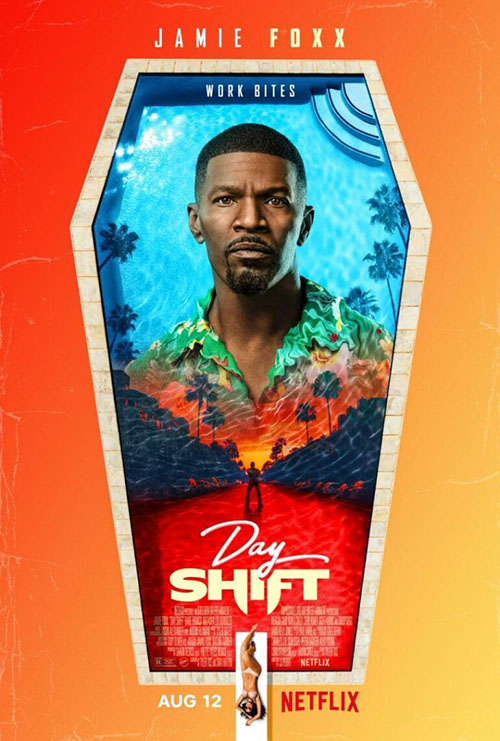 Blaxploitation, as a genre, has a specific tone and style. If you're going to play in that genre you have to do it delicately; strike the wrong balance and your film can seem too campy or silly, like you're parodying the genre you want to play in. It's hard to play in the conventions of the genre (a genre that's been around since the 1970s and was defined by that era and its filmmakers) without sliding over into silliness.

I mentions this not because Day Shift, the 2022 Netflix vampire film starring Jamie Foxx, is a Blaxploitation film, but more because the trailer for the movie certainly made it seem like it was trying to be one (and a terrible one at that). When watching Day Shift, though, you realize the film has no designs on being a solid Blaxpolitation horror film, which somehow seems even worse. That's because the film really doesn't have any designs on being much of anything. It's a pretty middling vampire adventure that has little to say about the characters, the world, and the monsters they're fighting. I frankly would have preferred a bad and silly Blaxploitation film to this mess.

The movie focuses on Bud Jablonski (Foxx), a supposed pool cleaner who is actually, by day, a vampire hunter. Bud used to work for the Union (a collection of vampire hunters with a very strict governmental structure) until he logged too many violations and was kicked out. Now he works on his own, as a freelancer, killing vampires and selling their fangs to his fence, Troy (Peter Stormare). He then tries (and fails) to make time to spend with his daughter, Paige (Zion Broadnax), the one good thing in his life.

Drama is inserted into Bud's life, though, when his ex-wife, Jocelyn (Meagan Good), reveals that she's looking at moving to Florida... and taking Paige with her. To stop her, Bud had to get the money together for Paige's private school tuition (four grand) and another stack of bills for her braces (another six grand), and he only has seven days to do it before Jocelyn puts the house on the market. This forces Bud to try and rejoin the Union via his one friendly contact within, Big John Elliott (Snoop Dogg). Bud manages to get one last chance from Union leader Ralph (Eric Lange), but Ralph puts a Union rep on Bud, a desk jockey named Seth (Dave Franco), who will follow Bud around and write him up if he even breaks one rule. It's a race against time (and Bud's own impulses) to get the cash he needs to save his family. 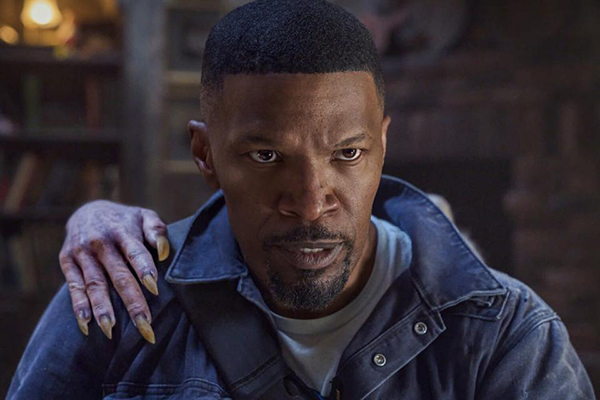 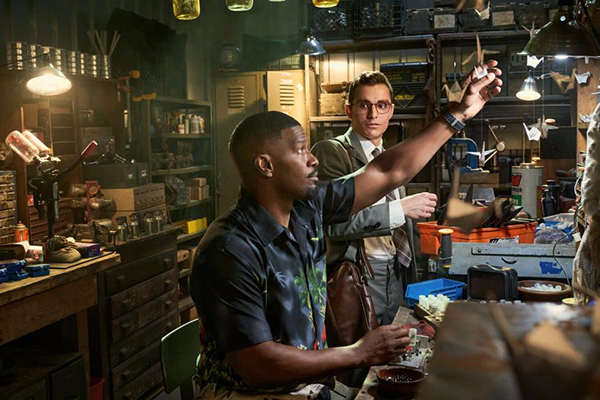 Day Shift is, at its core, a tale of two films: one is a slickly produced buddy-action film while the other is a poorly written low-budget cheapy. The two halves of the film fight against each other, whipping the movie back and forth with competing tones and styles, such that no real message or viable story emerges. The film is, in short, a mess of a movie that really needed more focus to sell, well, anything.

The best thing that can be said about the film is that, when it comes to its action, it does know what it's doing. Directed by J.J. Perry, who was previously a stunt man and second-unit director, the movie's action is quite good. It's not stuffed with stuttering cuts, instead letting the sequences play out with slick style. The action has impact and solid hits and the film clearly uses a lot of practical effects throughout. Even just simple things like hiring contortionists to play bendy-vampires when, in other films, these monsters would have been rendered in CGI, goes a long way towards selling the action. The fighting sequences, with Bud and his accomplices, are the highlight of the film as clearly Perry knows what they're doing on this front.

It's when the film actually focuses on its story, though, that everything falls apart. For starters, there's absolutely nothing special about Bud or his problems. He's a deadbeat dad that can et his life together. The film makes it out that his big problem, in his life and especially in his marriage, was that he had to keep his vampire hunting a secret. When that secret comes out (late in the film) and Bud can reveal to the ones he loves who he really is, the film acts like this repairs all the damage done. Except no because everything we see about Bud up to that point is that he's a jerk who not only treats those around him like crap but who also struggles to make time in his life for his daughter. There are deeper issues in Bud's character that the film never addresses, instead going for a quick papered-over happy ending that just doesn't fly.

When it comes to the buddy comedy aspects, the film fails too. Pairing Foxx up with Franco would seem like a good was to mine humor; Foxx plays the largely stoic action hero while Franco leans on his motor-mouthed erudite delivery making for an odd couple pairing. In practice, though, the film doesn't really know what to do with these two. The script isn't funny and the few jokes that are uttered come from Franco and seem like they were ad-libbed. Beyond that, there's no actual chemistry between Foxx and Franco meaning their buddy dynamic doesn't play. It's a waste of both actors. 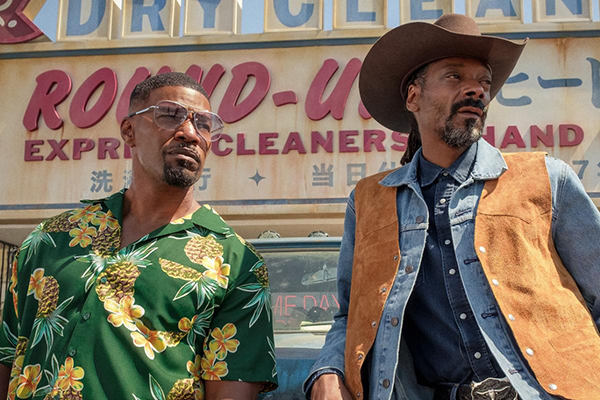 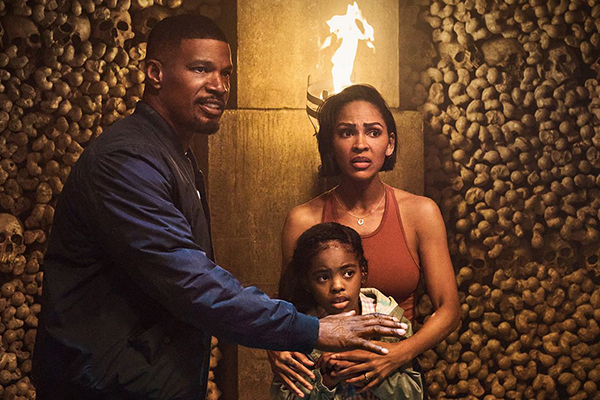 Deep down in the story there's actually a lot of ideas that could have been explored. The idea of a vampire hunting Union is pretty amusing and if the film could have been more about that, instead of saddling Foxx is a pretty bland "save my family" plot, that could have been something. There's also a lot of unexplored details about all the various vampire breeds and how they're all living in L.A. A film tat could have gone deep on the vampires and really showed us their culture could have been cool as well. This film doesn't do any of that.

Hell, the film doesn't even really explore the villain, vampire queen and real estate mogul Audrey San Fernando (Karla Souza). She's introduced early in the film talking about her grand plan for modernizing vampires and taking over L.A., which is a good start. But then the film shoves her off to the side, ignoring her completely until the last act simply so she can kidnap Bud's family and hold them hostage. She has no development, no style, and nothing for us to latch onto. She's an empty dress with fangs when the movie needed more.

What's most galling, though, is that this film, as simple as it is, cost Netflix $100 Mil to make. For that kind of scratch they could have cranked out ten other vampire films with more style and substance, that would have used their low-budget nature to create interesting solution to the filming process while actually giving us something meaty to latch onto. A first-time director getting $100 Mil for a threadbare vampire script is shocking and it speaks to how stupid Netflix was with their money.

There's a lot going on in Day Shift and not all of it is bad. Sadly all the ideas and storylines get mashed together in a two hour runtime that doesn't let the world breathe or the ideas get explored. This is a concept that could have done well as a TV series, spreading that $100 Mil across a set of episodes that could have developed Bud and his family alongside all the vampires and the union. Crunching all down to a feature length film means nothing gets explored and we get a trite little action comedy with nothing to say. There's something in this film that could have made for a good story, but Day Shift was not the end result we needed.