The Castlevania series is not above the occasional joke. There are little amusements added to many games, from the simple inclusions of Konami Man and Twin Bee bells as bonus collectibles in various games, to an entire room's worth of furniture to collect in Harmony of Dissonance. And yet, of the various jokes in the series few feel quite as silly as the cream pies from Castlevania: Portrait of Ruin.

Discovered early in the adventure, the Cream Pie is a sub-weapon for hero Johnathan Morris. It is exactly what it sounds like: a cream pie that the hero lobs at enemies. Its location makes sense, discovered in a bakery section of the City of Haze. Its purpose, though, is ludicrous. A pie? That you throw? It does make sense for the time period, sure -- cinema of the era was rife with comedians getting pies to faces -- but still. Something like this seems so silly in a Castlevania game.

Of course, that is the point. Sometimes the series just likes to let go and have a little silly fun. 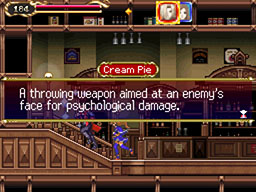 The cream pie is a lobbed weapon. Johnathan will chuck it in front of whereupon it will fall in a very, very short arc before hitting the ground. At first blush the weapon seems pretty useless. It doesn't have a ton of attack damage associated with it and it has next to no range. Why even bother?

There are a couple of things that can shift the opinion on the pie, though. For starters, you can have out two at once, adding to the damage it can crank out. And throwing it in mid-air will increase its range some (although not much). With INT gear applied, the damage will get boosted further. That doesn't make it exceptional, to be sure, but the pies can do some decent damage from this perspective when used right.

Still, in general the pie is more joke than usable weapon. Other arcing-shot weapons (like axes) have better range and damage, making them a preferred choice in most situations.