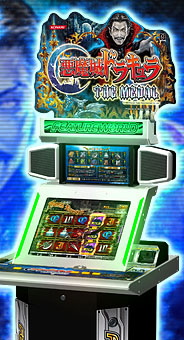 After the release of Wai Wai Poker, Konami took a long break from making Castlevania-related gambling machines. That's not to say they weren't making any machines of this nature (although finding a list of all the gambling machines Konami had made over the years is surprisingly difficult), just that the company took about a decade off from using Castlevania theming in their machines.

However, in 2004, Konami Gaming, Inc. (the gambling arm of the corporation) was awarded licenses to build gambling machines in the U.S. Eventually the company would roll back around to some of their more popular IPs, and that time happened in 2008 with the release of Castlevania: The Medal (title Akumajo Dracula: The Medal in Japan, with the "Akumajo Dracula" translating as "Demon Caste Dracula"). Now, technically this one isn't a game designed for the Western markets -- as a medal game it was still exclusively aimed at the Japanese pachinko parlors and similar arcades. But this game does mark the resurgence of Konami marketing their gambling machines off their popular products, and this also marks the point where the company really started to move away from home gaming and into gambling machines as their main pursuit.

Like the older machines the company made, Castlevania: The Medal doesn't actually spit out cash. Instead you'll play medals (tokens) into the game and try to win more medals from the way you play. Get enough medals and you can exchange them at kiosks in the arcade for prizes (and, if reports we've heard are true, then you can take those prizes to a different booth behind the arcade and exchange those for money in a two-step legal loophole). The joy of playing and winning was the goal, and whatever concerns about cash from the player were incidental, we're sure.

Castlevania: The Medal is a two-phase slot machine. The main window of the game features a digital, five-reel display. When a token is put in and the play presses "Go", the reels will spin, eventually displaying three rows of five symbols each. Like with any regular slot machine, matches are made along lines across the reels, although this game uses multi-reel matches, meaning you aren't just looking for straight lines across the middle but also the top and bottom, as well as a number of diagonal configurations. The chances for multiple winning combinations are high which then means that the pay outs for any one winning line are lower by comparison.

However, there's more to the game than just the reels. If the player manages to get a plethora of certain symbols in winning combinations, the top screen will then display a bonus mode which will feature Richter Belmont fighting monsters. As you play this top game, with Richter doing battle as you make simple buttons presses, you could end up with a bunch of Wild Cards that could then be cashed in, in combinations, for bigger payouts. It's all risk and reward, with enough animation and new things to do to keep players hooked.

The basics of the game still aren't anything more than a standard gambling machine, the likes of which we've already seen from Konami a few times in their past. To their credit, though, the bonus mode does at least integrate Castlevania theming in better, so even if th concept of a gambling machine still eels a little sketchy, it's at least one that integrates the property better than most of the games we've looked at so far.

Castlevania: The Medal has no review. You could be the first to review it! Contact the staff of the Inverted Dungeon to contribute.