Sometimes games come out and they're considered seminal works of a console. Super Mario 64, for example, is considered a defining work for the Nintendo 64, showing what the system was capable of and remaining one of the best titles for the console despite coming out at the very start of it's life-cycle.

Other times, though, game, no matter how good they may be, suffer due to the time they are released in a console's life. Such was the case with Shantae, a Metroidvania-style title released very late into (basically dropped into the dead lands of) the Game Boy Color's last days. The Game Boy Advance had come out a year earlier and Capcom, the publisher of the title, apparently had so little faith in its ability to survive they dumped it out in one of the smallest print runs possible for a mass-market game, and then left it to die.

And yet legend of the game spread. Fans told the gospel of the game, sharing it's fun game play mechanics, delightful music and cute art style. Despite being a Metroidvania game, Shantae isn't really a good fit for any part of that genre. Like a throwback to older game, Shantae works as a blend of Castlevania II: Simon's Quest, Zelda II: The Adventure of Link, and the original couple of Metroid games without really being like any of them.

In Shantae the titular heroine has to venture out into an open world (a la Castlevania II) to find temples and defeat the bosses with to retrieve relics (a la Zelda II), all to gain the power to defeat the evil pirate Risky Boots. Along the way she'll gain the powers of genie dances, transformations, and teleportations that let her move more freely around the world and find new treasures, new dungeons, and new powers. It was a fast, fun game that required a good memory but still delighted even if played for only a few minutes at a time.

Sadly, timing really hurt the game. Along with the lack of faith provided by the publisher, Shantae was hurt by the fact that it came out on an aging system that no one wanted to buy games for any more. Despite having a lot of upgrade technology in its cartridge that would unlock if plugged into a Game Boy Advance, upgrading the over-all quality of the game, it was still "just" a Game Boy Color game, and people largely ignored it. The few fans of the game that found a cartridge were the lucky ones.

The rest of us had to wait for the re-release of the game on DSi-Ware. If you have a chance to play it, and you're a fan of classic Metroidvania-style games, we recommend checking it out.

The game that Shantae most resembles is the aforementioned Castlevania II. Like in that game, Shantae features a fully-explorable overworld. The main character is taken around the world to find towns and dungeons to explore (akin to to the Mansions of Evil in Castlevania II). Although the towns aren't constructed in the same way as in Simon's adventure, they serve the same purpose -- a location to gather clues and information as well as purchasing items and weapons.

On that front, Shantae has attacks a lot alike the Belmonts. Her primary attack is via her hair -- a whip-like motion that's very much like Simon with one of his less-powerful, shorter whips. She also has access to a variety of sub-weapon style attacks. Although most of them aren't the same as the Castlevania classics they do serve the same purpose -- backup attacks that can all but destroy bosses in their own right. 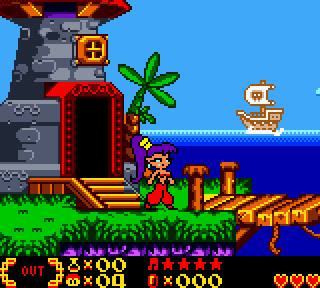 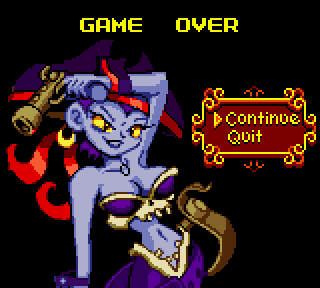 In fact, many of her secondary powers are very Castlevania-like. She eventually gains the ability to transform into different animals, gaining climbing, flying, and smashing abilities, all which bring to mind Alucard and his animal transformations in Symphony of the Night (as well as many other Metroidvania games in the Castlevania series.

Of course, that same analog can be directed to other games as well. Certainly the monkey transformation is a lot like the spider ball in Metroid II: The Return of Samus -- the monkey is smaller, quick to move through small spaces, and can climb (via wall jumps) up vertical surfaces. But then, that's why the genre is called "Metroidvania" -- the games reference each other and influence the other games in the genre.

One more point is worth noting, one that cements Shantae as a clear spiritual successor to Castlevania II: it's day-night cycle. A simple mechanic put in place, the day-night mechanic influences world events as well as making the enemies stronger at night. The mechanic is well implemented and thought out, maybe even better used than in Simon's adventure.

Shantae, then, is a game worthy of inclusion in the pantheon of Metroidvania games. Thankfully, Shantae eventually saw the praise and adoration it deserved.