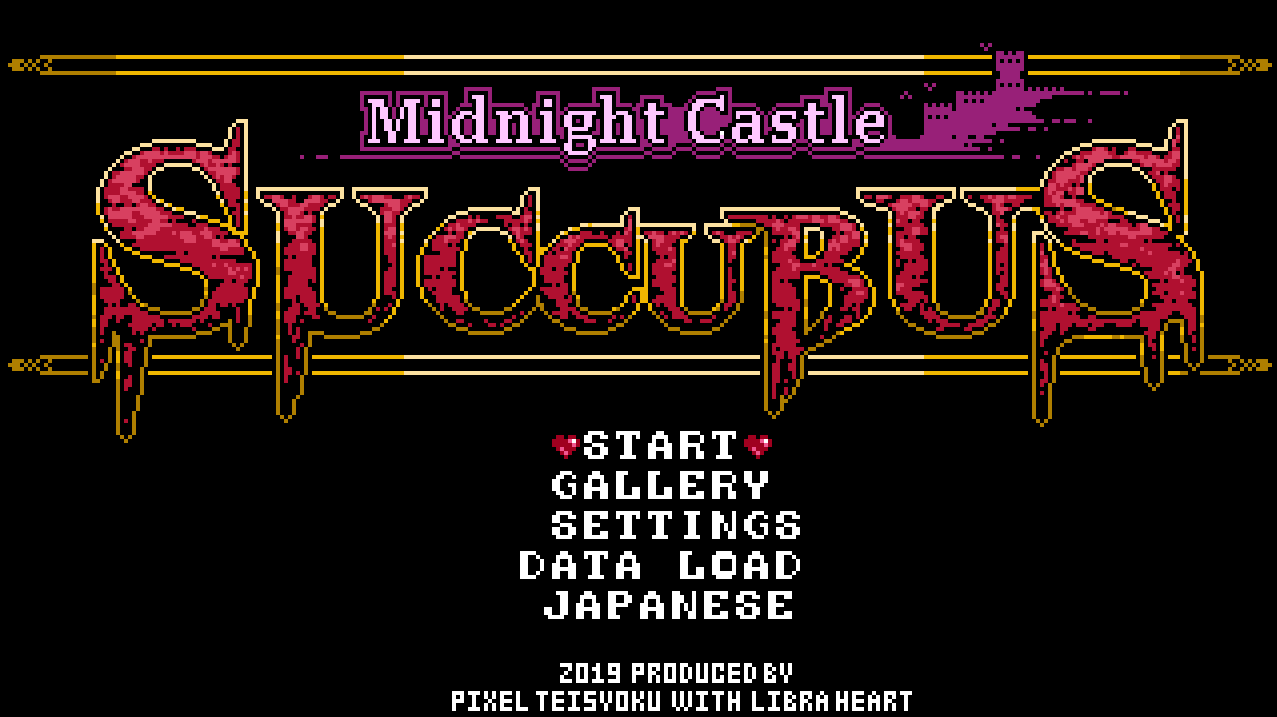 It's not often a game makes me angry because it's actually good. That, however, is exactly the case of Steam-released game Midnight Castle Succubus. It's a tightly plotted platformer with interesting mechanics mixed into a game that feels like it came out during the height of the Castlevania NES era. Well, except with one major difference: it's an Adults-Only pornographic game. The two sides really don't seem to relate, and the fact that it's pornography means that even talking about it makes me feel just a little weird.

In the game you play as a seemingly nameless heroine as she's set on a quest to venture into the lands of the Succubus. It's seems this dream demon has kidnapped village girls and is using them for, well, whatever nefarious reasons she has. It's up to our whip-wielding, skirt-wearing heroine to venture into these lands, fighting past bosses, collecting power ups, and visiting villages around the land, all to gain the needed abilities required to get to the Midnight Castle of the Succubus and defeat the villainess at the top.

In construction this game isn't going to feel all that different from any NES-era Metroidvania you might have played. Our heroine comes with a whip, finds random sub-weapons around the lands, and collects money all so she can buy more upgrades (for her whip as well as other abilities). Some bosses block progression, bestowing their own bonus powers upon the heroine once defeated. The adventurer can go back and forth through the game, exploring areas over and over, especially after new abilities unlock and out-of-reach areas suddenly become available. 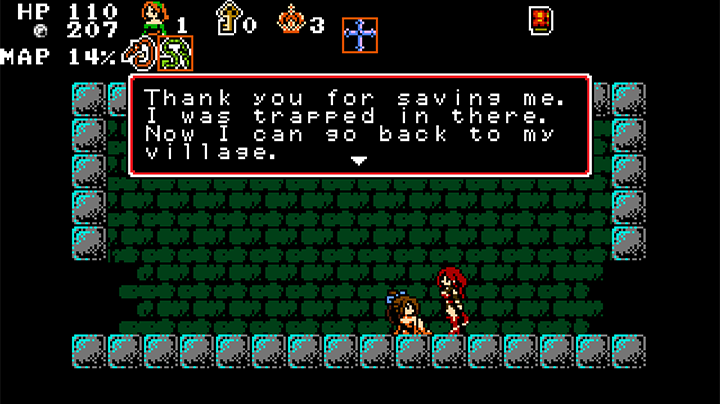 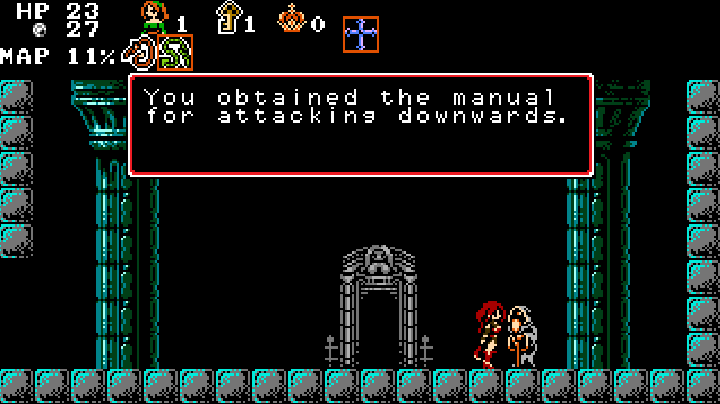 Graphically the game resembles those 8-bit games as well. The colors and details are probably a little bit nicer than what the NES could output, but in general the game was designed to evoke the feel of a classic adventure, just set on a modern system (Steam). The music, too, reflects this, with poppy, chip-tunes that sounds like the Gothic horror adventures of the past era. Everything looks and sounds spot on, and by and large you can get lost the sound and style of the game and appreciate how much the game looks to match the elder titles.

It also plays really well, with tight and responsive controls and little in the way of lag or slow-down. As our heroine moves along her quest she'll gain other adventurers that she can use as followers. Each of these come with their own bonus powers and special attacks, and finding, using, and mixing these followers into your game play is key to reaching some of the out of the way secrets. The followers add a nice spice to the game, evoking that sense of Castlevania III without ever copying it exactly. It was a feature I really appreciated as it added depth I wasn't expecting.

All that being said, this is still porn. When your heroine reaches one health point, she'll lose her armor and travel around (topless, of course) in just boots and a thong. Take damage from there and you'll unlock one of a few cut-scenes where the girl is attacked (yes, sexually) by some of the monsters in the era she died. Then you start right back off at the start of that room, full of health and armored once more, ready to progress again. Along with that there's also the cut-scenes of other woman getting monsters-sexed (usually unwillingly), and so much other nudity in the game as well. All the bosses are female, all of them are naked, and there's plenty of opportunity for the game to throw as much nudity at you as it can.

That's not to say you have to play with the nudity on, mind you. The DX edition, along with other quality of life fixes, also includes a "Safe For Work" mode, covering up the nudity and making the game palatable for anyone. Of note, though, the game's producers do say that if you turn on SFW mode you miss about 20% of the content of the game. Whether that's just the various sexy cut-scenes, or if there's something more to it, I'm not sure. Most of the game seems the same, from what I saw between the two, without enough changes up front to encourage me to dig deeper. Just knowing there was "missing content" meant that after a cursory view of the SFW mode, I switched back to the NSFW edition to ensure I saw as much of the content as I could for a proper review. 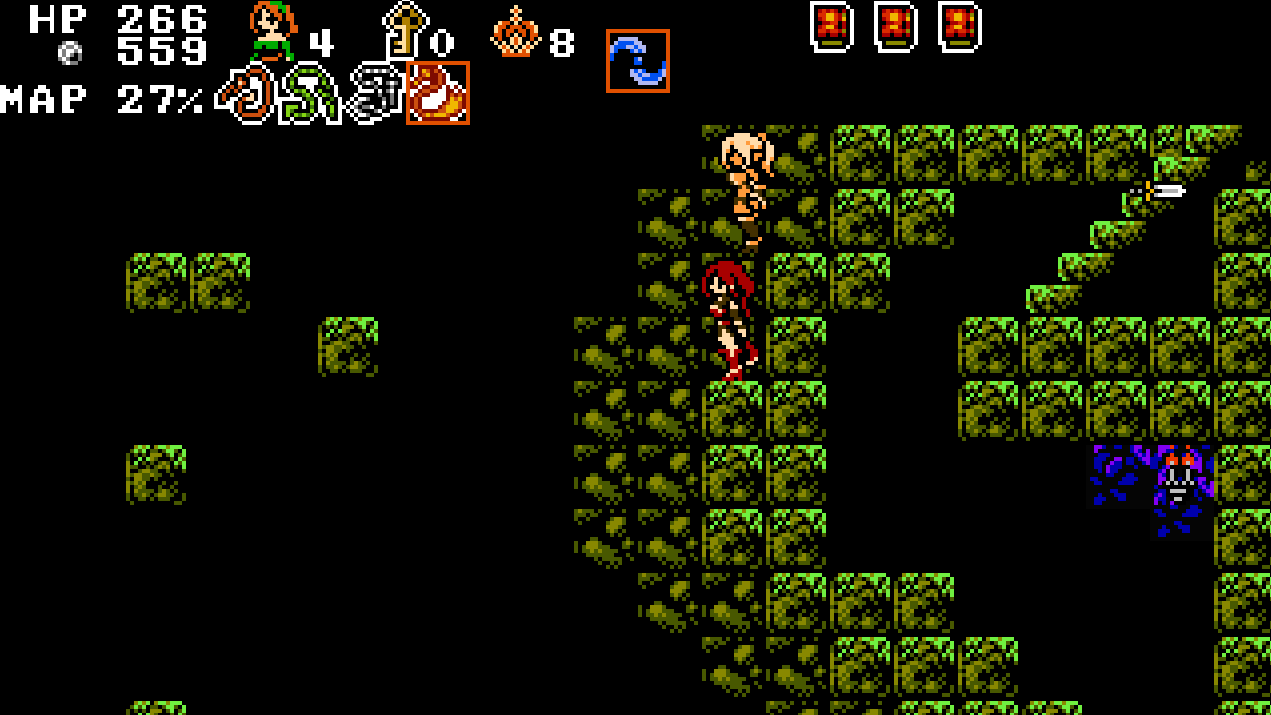 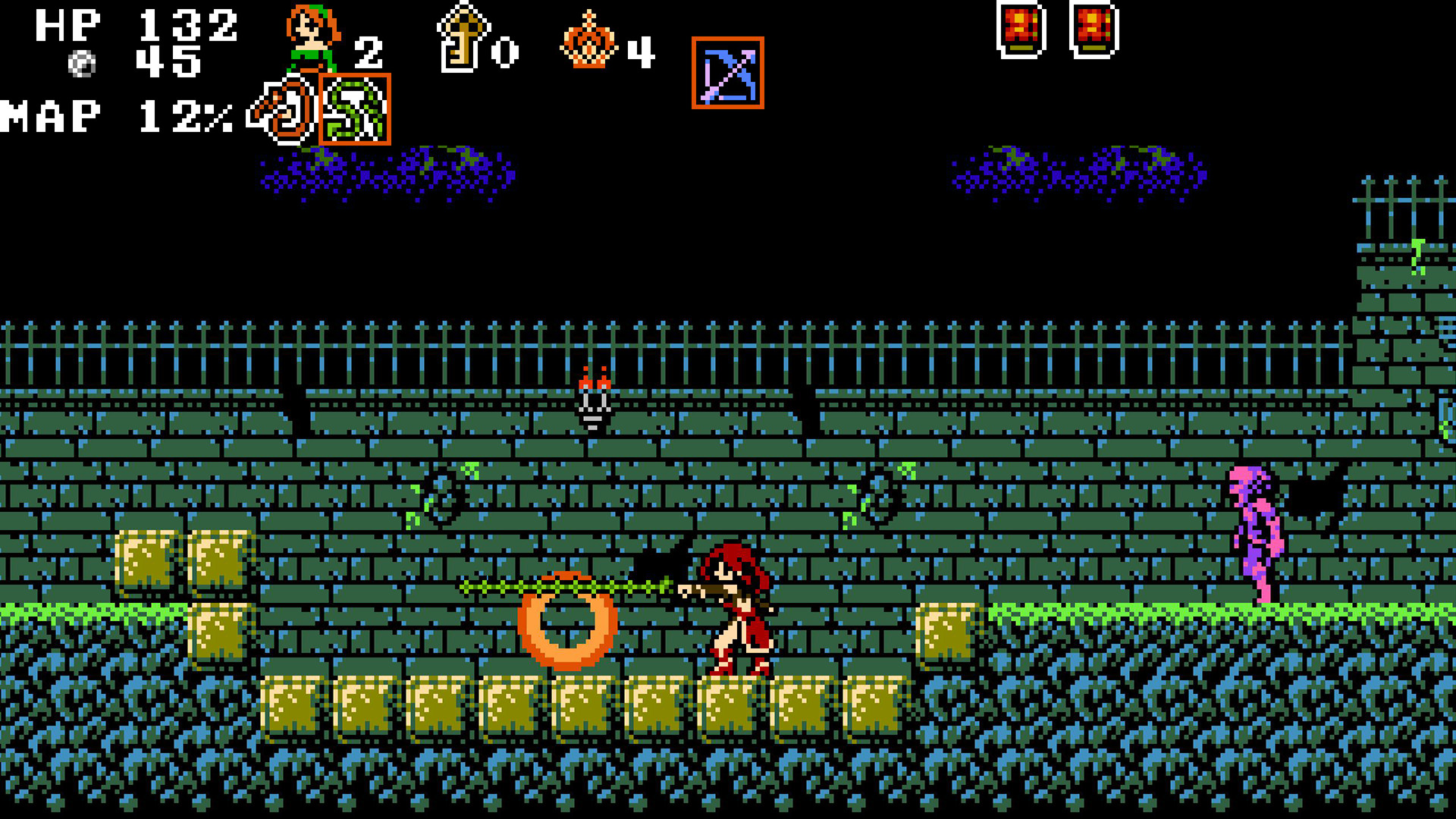 At the same time, there are some influences that feel like they were drawn from other games in the series. As I noted above, I felt like the addition of the collectible partners was drawn from Castlevania III. You never switch to them, unlike in that NES game (or in the NES-styled Bloodstained titles), with the partners instead following behind you and kind of doing what you do. It's a nifty mechanic but you can see where they drew the inspiration for it -- a little Castlevania III, maybe just a touch of Ninja Gaiden II: The Dark Sword of Chaos. 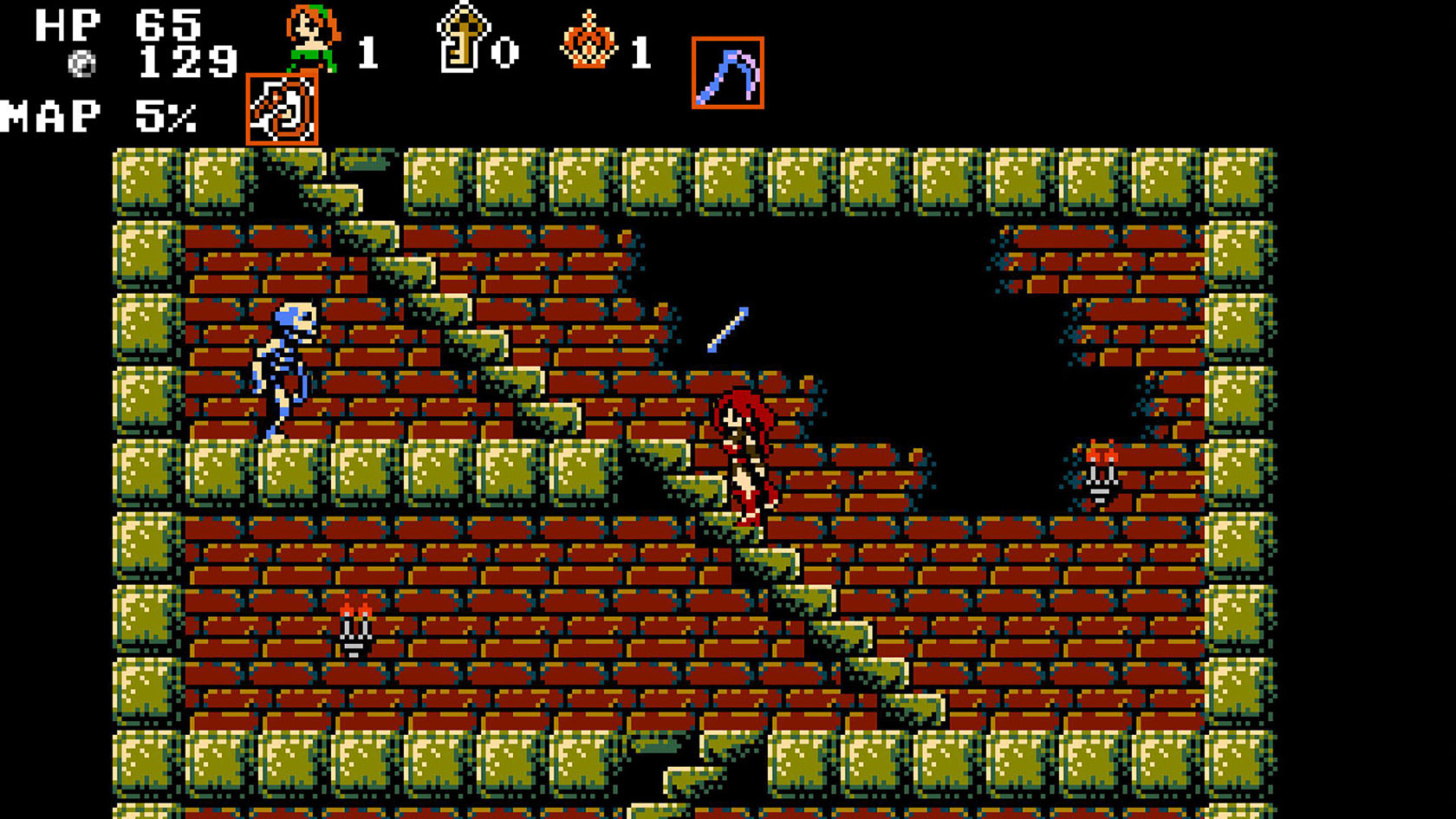 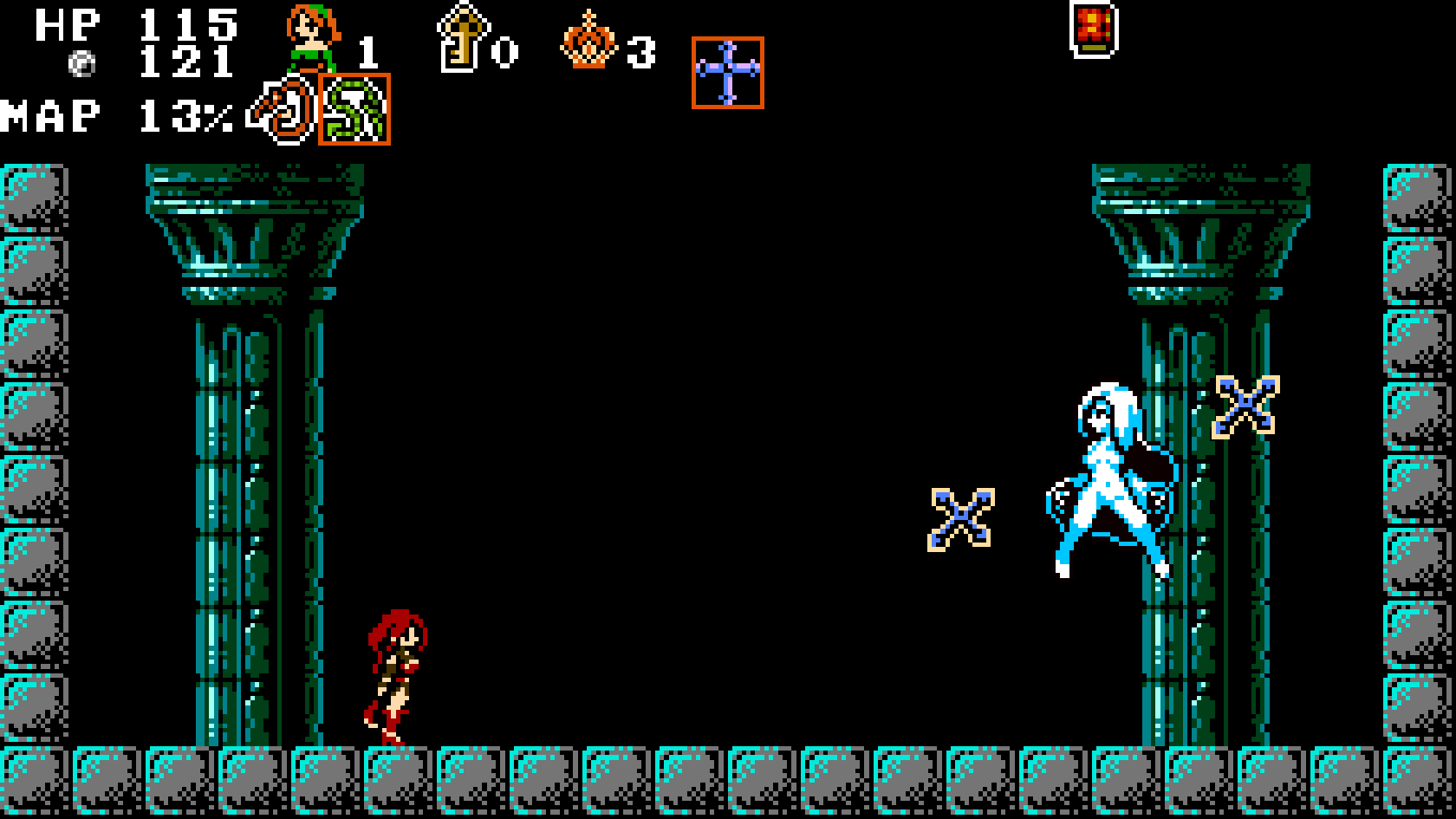 The presentation of the cut-scenes, weird as it is to say, reminded me of Castlevania Dracula X: Rondo of Blood. It's very anime-inspired (with a lot of cheesecake on top of the nudity), and seems to be designed to match the general art style of some sequences from that PC Engine title. Plus, there's the mechanic of finding and saving lost village girls which feels like it was ripped directly from the 16-bit era game.

In so many respects this game feels like a loving tribute to Konami's classic adventure series... but then we come to the nudity and it's hard to know what the producers were going for. Did they really love Castlevania or was it a means to an end. I lean towards the former as this game feels well researched and like it was a labor of love, but who knows. Maybe one of their (lucrative) fans asked for a game "like Castlevania but with monster-rape" and the team complied. Whatever the case, outside the nudity (and, let's face it, in the Japanese versions of the games, there was some pixelated nudity, too), this game is a spot on translation of the classic series.