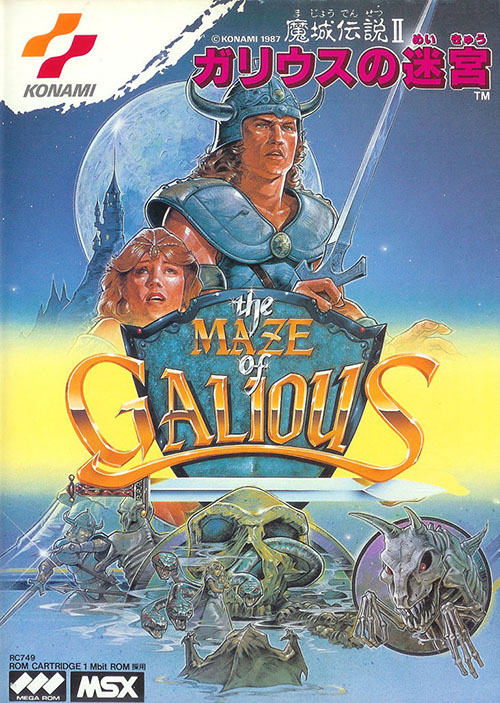 We've covered a number of Metroidvania titles as we've explored the influenced other games had on the Castlevania series. Some of those titles came from other companies, but it's fair to say that no company had a greater influence on Konami than Konami itself. The company spent a number of years exploring out all possible avenues in the burgeoning "exploration-platformer" genre that was forming (and would get credited to Metroid as the key, formative title eventually), not all of which directly tied to the Castlevania series. And one such title is directly as referenced as serving as inspiration for the first true Metroidvania title in the series, Castlevania II: The Maze of Galious: Knightmare II.

At first blush these games might not seem to be related. Where Castlevania II features a return of Simon Belmont as he ventures out into the Romanian countryside, exploring mansions while searching for Dracula, Maze of Galious (titled Majo Densetsu Tsu: Gariusu no Meikyu in Japan, translated as "Demon Castle Legend II: The Maze of Galious") is based entirely within a single castle, featuring tiny little heroes in cramped, grid-like rooms, venturing around in flick-screen scrolling. If you weren't told the game was a precursor to Castlevania II, would you know any better?

The game itself, though, certainly does feel like an early Metroidvania. From the central hub castle, the two heroes -- Popolon, who can push heavy objects, and Aphrodite, who can handle underwater better and has a greater ammo-firing capacity -- explore out, looking for treasures to collect along with the keys needed to open access gates to the hidden worlds within the castle. They'll fight enemies, gain upgrades, and hit shops where they can purchase even more bonuses. Along the way they'll gain health increases that make it easy for them to survive the constant onslaught of enemies our heroes will face.

Although it originally came out on the MSX computer system (a cartridge-based family computer system similar in design to some Atari systems), the game was eventually released on the Famicom, too, in an remixed and enhanced version titled Majo Densetsu II: Daima Shikyo Gariusu (translated as "Demon Castle Legend II: Great Demon Bishop Galious"). This edition is really what sets the tone and tenor for the game when you compare it to Castlevania as it has larger hero and enemy sprites with much more animation. The original game hardly matches Konami's usual output but the Famicom game features Konami's house style for graphics. Of course it's the larger sprites that also required the game to have full remixed dungeon maps (and proper screen scrolling) as the rooms wouldn't fit on the screen the same way this second time around. 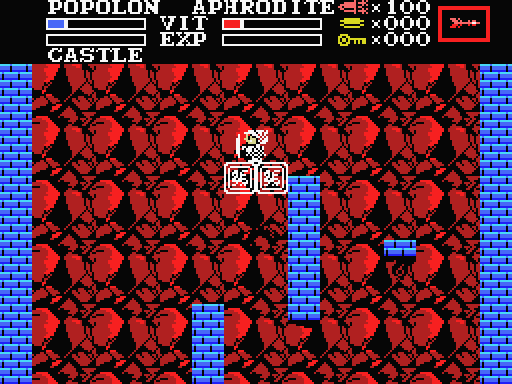 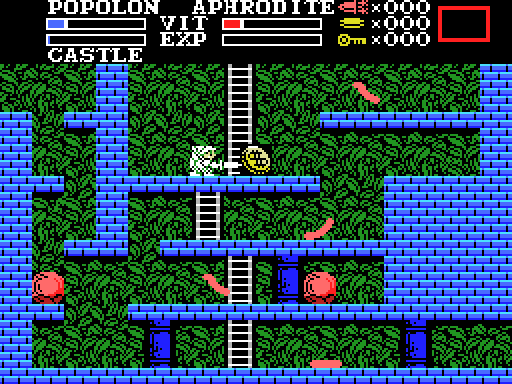 Regardless of which version of the game you play, though, what you'll find is an adventure that really doesn't feel like it wants you to complete it. Your heroes start off so weak, with a tiny fraction of their health bar, that you're likely to die early, and often, without much of a clue where to go. Experience, which only refills your health when you "level" up, comes at a slow pace, and while you can revive a fallen comrade if they die, you have to pay for that and that requires killing enemies for coins, which are infrequent drops.

Once you start getting power-ups that increase your attack and defense, along with maneuverability, things do start to get easier. Still, you'll spend a lengthy part of the early game just navigating the main castle, stuck on a tiny sliver of life, trying to find anything that will make surviving easier. It'll take actually killing a boss before you get any kind of health upgrade, and by then the rest of the game becomes a cake walk. It's a weird, inverted learning curve where you become so powerful by the end game that the challenge is completely gone, but the start is so punishing you might not get there.

If you can get into the game, there is a fair bit to like. It's an early attempt at the "exploration-platformer" and it does work, for what it is. Naturally, though, it has that "Nintendo Hard" challenge that feels absolutely relentless until you finally figure out what you're doing. But, to balance it out, the game have charming little sprites and a pretty epic couple of music tracks that help to keep you pumped throughout the adventure (of course, it's from Konami so of course we'd expect good graphics and sound).

The game hasn't aged well in comparison to latter Metroidvanias -- even the Famicom port looks better -- and it's hard that most gamers will care much for this title now. You have to want to explore its secrets, to see what ideas Konami had early on, to appreciate this game. It's an interesting curio, a fun footnote to be sure, but not something most people will feel the urge to explore after a few minutes of dying over and over again.

As noted, this game is considered a precursor to Castlevania II, with that game's development team specifically looking at Maze of Galious for inspiration. You can kind of see it, too, once you know to look for it. The construction of the game does lend itself to Simon's second adventure, with an "overworld" that then leads to "fortresses" within, access to which often has to be unlocked before you can properly explore the latter environs. 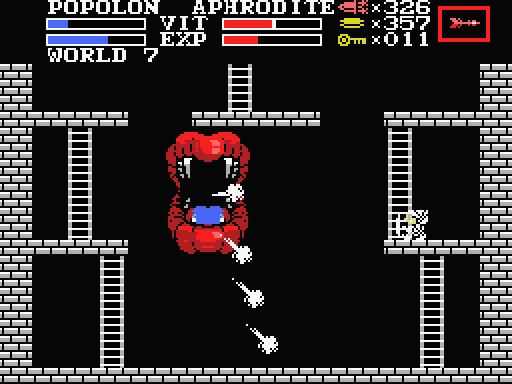 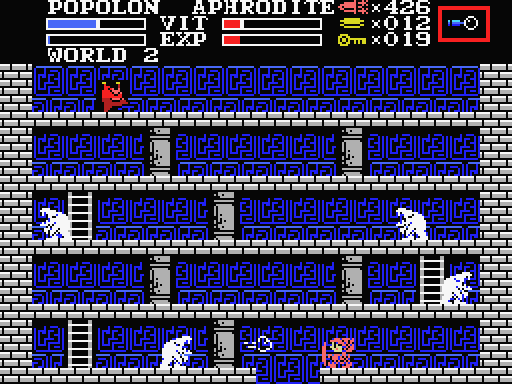 Beyond that, you can also seem other areas the game drew from. For instance, there's the whole inventory system comprised not only of a variety of sub-weapons to collect and use, but also a ton of passive upgrades that sit in the inventory (and, again, not all of them being entirely useful). The shop system on top of this adds to the depth, providing necessary replenishment while also holding some of the key collectibles behind a monetary gate. Simon has to deal with these shopkeeps as much as Popolon and Aphrodite did.

And, of course, some of the enemies seem to come from the same shared pool. The slimes that seemed oddly out of place among all the Gothic terrors in Dracula's mansions likely came from The Maze of Galious as they're prominent enemies in the early going of this game. Meanwhile this title also has the standard allotment of armors, skeletons, and bats, showing the paralleling, back and forth, between these two titles.

Let's also just make note of the fact that the Famicom version of the game translates as "Demon Castle Legend II". For Castlevania fans, that title should sound all to familiar indeed.

While it's hard to say this game directly slots in between Castlevania and Simon's Quest, especially since these games were made by different teams, you can certainly see how the Castlevania team could have seen this title in development and drew ideas from it. There's too much shared DNA here for it to be any other way.