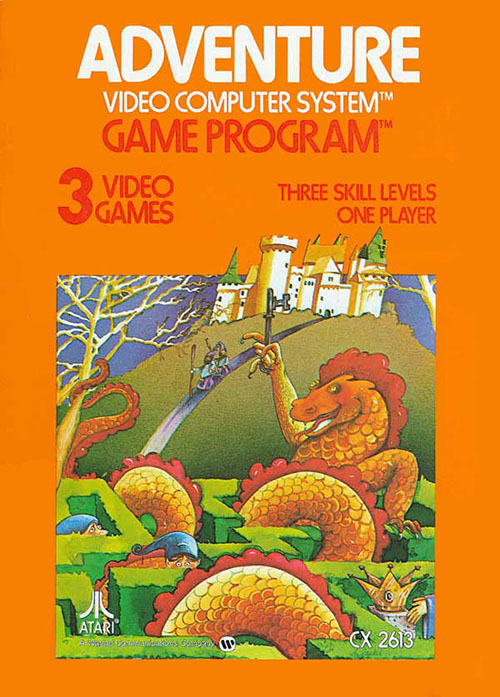 Should you want to figure out the exact point at when the action-adventure genre started it's hard to find a game earlier in the evolution than 1980's Adventure. The game, inspired by the text-based Colossal Cave Adventure, Atari's Adventure did what no text-adventure could do: it married graphics to the cave-diving, dungeon-crawling tales of yore and, in the process, essentially gave birth to a whole new genre.

Video games of the era (we're talking way back in the Stone Age of gaming here) were pretty crude, functionally. They were blocked and chunky with "approximate" graphics designed to give the feel of what you were doing but when compared to what came even a few short years later (such as the games released on the NES in 1983 and beyond), Atari games seem ancient. At the time, though, they were revolutionary. They were a step up from the simple monochrome graphics of Pong, and while arcade games quickly surpassed the 2600 in terms of form and function, Atari still ushered in a new age of gaming on all fronts.

Now, no one is going to call Adventure a Metroidvania; even by the terms of the Atari era most of its games were pretty simple. You have a joystick and a single button and the console had to give you everything you wanted to do via that limited set of controls. That meant Adventure had to convey its whole game with the simplest of style. Despite this, though, it managed to create a real, well, adventure.

The basics of Adventure are simple: you're a hero (represented by a single brick of color) tasked with venturing across the land on a quest. That quest seems vague at the start as the game let's you figure everything out for yourself. There's a yellow key and when you put it against the ate of the yellow castle, the gate opens. Inside the castle you'll find a sword, and when you carry that sword down south you'll inevitably run into a dragon. Kill that dragon with the sword (simply by letting the dragon poke himself on the object) and you can progress safely. Explore enough and you'll eventually find a black key, which you can take to a black castle to open that gate. Inside resides a glowing chalice and, if you can get that back to the yellow castle, you win.

That first quest establishes all the basic rules you need to know. It gives you the key items you need to know -- the sword, the keys, the chalice, and a wall-opening passage you can carry around (like a portable hole) -- along with the fact you can only carry one item at a time. It also tells you all you need: kill dragons, find the castles, get the chalice, win. Once you know this tutorial, though, the game then opens up. Two more quests are available from the opening menu and you can explore either of these as you like. They are, however, increasingly difficult.

The second quest adds in a few more twists on the game play. For one, there are more dragons to battle, so you'll have to carry that sword with you. There are more mazes to explore as well, with the layout of the game getting increasingly complex. The longer quest also introduce probably the most annoying creature in the whole game: the bat. Anyone that has played Adventure already know the pain and anguish the bat can bring.

The bat is a force of absolute chaos. He can't kill you but, and this is the sad part, you can't kill it either. Instead you have to helplessly watch as the bat flies around the map, grabbing whatever item he comes across and flying off with it. Like you the bat can only carry one item at a time. Unlike you, the bat can fly anywhere and isn't bound by walls. The little grabber will grab anything, too, from your sword to keys to dragons and even the chalice. If you're unlucky enough to get got by the bat have fun watching as it flies off with whatever you needed, potentially never to be seen again.

The maps in Adventure are set, with each quest having a specifically defined world. But between the bat, and the fact that all the items in the game are randomly placed each time, you will get a new adventure in Adventure every time you boot it up. That adds a lot of variety, and re-playability, to the base game. That's often why this game is cited as a classic, and certainly due to the fact that there were few games just like it on the Atari, Adventure got to set the bar all on its own.

Going back and playing Adventure now it does feel pretty basic. It's short, especially if you get lucky; there's a chance you can finish all three quests in less than ten minutes, if you know what you're doing. it doesn't have the staying power of larger RPGs, and it doesn't even have that robust of a quest (owing to the limits of the tiny cartridge). But there's still charm to be had in this title, fun to see what could be done on the Atari 2600 while you roam around some top down mazes looking for a magical chalice.

We're so far before the dawn of platforming -- one year before Donkey Kong, two years out from Pitfall, with only the 1980 contemporary Space Panic to show what was to come -- that nothing here is even going to resemble Castlevania. Instead it's the promise of the adventure within Adventure that lights the way to where the Castlevania series would eventually go.

To get to the Metroidvania genre we have to take a number of steps. We have to get items and gain abilities. We have to learn to explore complex areas and find secrets. We have to have a quest with a defined goal and end point. Those are key ingredients that the genre would follow (and refine), and the crude basics are here in Adventure. This is the first game to start mixing those elements together -- item collecting, monster fighting, action in real-time -- with graphics (and limited sound) into what we'd consider a proper video game. This is where it began, and everything in the genre would come to follow.

When you play Adventure you see the elements that would go on to influence Dragon Slayer, that would get refined in The Legend of Zelda, that would then be pulled into Metroid. This is the cornerstone upon which all Metroidvania history would build, and it was all designed by one guy, Warren Robinett, for the Atari 2600.