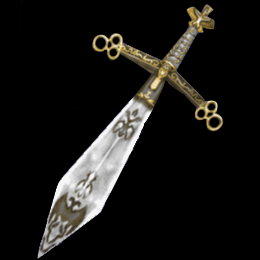 Although daggers have been a part of the series since the original Castlevania, these have been part of the heroes' growing collection of sub-weapons. They were thrown items, not melee weapons, and were generally considered to be one of the weakest, and least useful, weapons in any hero's repertoire.

Instead of thrown weapons, though, we're focusing here on the melee side of things. Although knives have generally been decoration for a character (Richter Belmont usually wearing on on his hip as decoration), it wasn't until Castlevania: Symphony of the Night that the games introduced a melee knife that could actually be wielded.

In Symphony, protagonist Alucard has an early encounter with Death that strips our hero of his equipment. This leaves him barely wearing anything, and with only his basic punch as an attack. However, early enemies have a chance to drop useful weapons, and one of this could be a knife. This short weapon, while weak, could be used quite quickly. It's range was terrible, of course, but it did make up for that with the quick barrage of attacks you could unleash by pressing the attack button quickly enough. Alucard would go on to collect more knives over the course of his quest, but all of these were quickly out-paced by other, longer weapons, and pretty early in his adventure all knives were basically rendered useless by other, better gear.

Instead, it was the next console release, Castlevania 64, that brought the dagger into its own. In that game, hero Reinhardt Schneider could use the famed Vampire Killer, but he had a secondary attack of a short range knife that he could use. While the whip was powerful, and could be upgraded with the standard whip orbs the hero could collect, his dagger remained a trust accessory. It was fast, it had decent range for its size, and it could be used as the hero went past an enemy, allowing him to slash in an arc and catch the foe with a glancing, but still damaging, blow. This actually proved, in many cases, to be a more effective attack than the whip, really letting this melee weapon come into its own.

This would prove to be the high point for the knife, though. Later entries in the series would either revert to using daggers only as sub-weapons or, in the cases where they were melee attacks, like Aria of Sorrow and Portrait of Ruin, the knife would prove to be little more than a short, and ineffective, melee attack quickly upgraded past once the hero found something better.