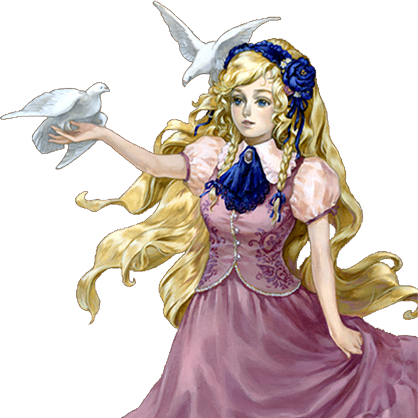 Although the characters featured in previous Castlevania games were warriors, adults who had trained their whole lives for the job of fighting (and killing) evil creatures, Castlevania Dracula X: Rondo of Blood took things in a different direction for one of its two playable characters. Sure, Richter Belmont was the classic vampire hunter, but his unlockable companion, Maria Renard, was a young girl. Although powerful, she wasn't a warrior like those that had come before. She was a kid.

This was reflected not only in her appearance and attitude (her death screen for example, is as kiddy and you could dream up), but in her weapons as well. While others had used swords and staves and the like, Maria threw doves. White birds. It's a strange and kind of ridiculous choice, but it lines up with the other animals she could call as sub-weapons. In short, this girl really liked animals.

Was is so ridiculous, though? While it might seem odd to take on a master vampire with a pack of birds at your beck and call, the dove has a long religious history. Most famously, the dove is considered a symbol of purity, this relating back to Jewish and Christian symbolism where the dove represents God's pure spirit (and, later, Jesus's too). In that context, throwing a symbol of purity against the leader of the undead makes a certain kind of sense. If you're an pre-teen girl, at least. 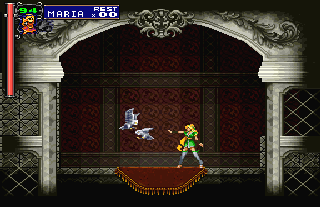 Strictly speaking, doves as the primary weapon of a hero are only used in two games, both times by a young Maria. Both their first appearance in Dracula X and their later use in Harmony of Despair, see the birds fly out and upwards before returning to the girl, kind of like a mid-range boomerang. While Maria had to be somewhat close to damage enemies with her birds, the range wasn't that much different that Richter's Vampire Killer, with considerably more coverage due to their arc.

-aria doesn't have attack birds again as her primary weapon until the re-release of Symphony of the Night as part of The Dracula X Chronicles. Here, -aria can once again summon her bird friends (as opposed to her appearance in the Sega Saturn port, Nocturne in the Moonlight, where -aria performs like a agile street fighter), with the birds following a similar arc as before. This time, though, the birds are owls, not doves, perhaps because owls are bigger so they seem more threatening?

Beyond these uses, though, the birds haven't been used by any hero as a primary weapon. The closest the games have gotten otherwise was the Dove Sub-weapon in Order of Shadows. There, the hero, Desmond Belmont can find the dove and use it in combat. This was an explicit reference to the past appearances of doves in the games, even if their use isn't the same (and they travel on a somewhat different arc than before).

Outside of their use as a primary weapon (and one appearance as a sub-weapon), birds have also shown up a number of times as familiars in various games. The first time was in Nocturne where -aria could summon an owl familiar (which is likely why her primary attack was changed to owls in the later re-release). This bird functioned much like Alucard's bat familiar. Flying in an arc towards enemies, damaging them, before flying back to the hero to repeat the process.

The next big Metroidvania title, Circle of the Moon featured a host of bird familiars for the players to earn and use. The owl appeared here again, and while he would fly around behind you, his attack this time was to spit little earth clods in an arc at enemies to damage them. The owl was joined by the hawk (who flew around like the owl and bat familiars from before) and the Thunderbird (an electrified bird who just kind of floats around damaging enemies as it feels like).

Finally, much later, the owl familiar returned for Order of Ecclesia, and here the familiar was actually necessary for full-clearing the game. As one of the side-quests Shanoa had to perform, she had to collect the owl from the Tristis Pass before returning to Wygol Village.

Amusingly, a couple of enemies also had their own owl familiars. The Owl Knight in Symphony had an owl companion (appropriately enough) he could send out to attack Alucard. He would also be most aggrieved if you kills his bird, sinking to his knees in misery. Later, the old God Agreus in Lords of Shadow 2 had his own owl familiar. Apparently owls were very popular all over Romania.