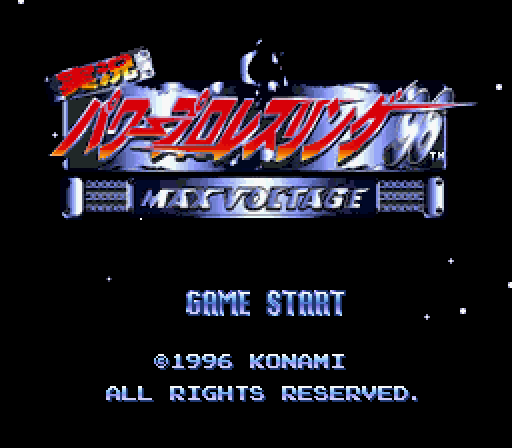 As a company, Konami has existed for some time. Like many long-running game companies in the Japanese market, they started off not in video games but in another field: juke box repair. This transitioned into arcade amusements, eventually launching a full fleet of arcade, and then home console, games starting in 1978. They have a rich and deep back catalog with a number of different genres covered. Surprisingly, though, the company hasn't put out that many wrestling games.

When researching for Jikkyo Power Pro Wrestling '96: Max Voltage, their 1996 Super Famicom effort, I wanted to see what other wrestling games Konami had made before that could have influenced this title. I only managed to pull up one: The Main Event, a tag-team two-on-two wrestler only released in arcades in 1988. That game has a play style very similar to Power Pro Wrestling, seemingly even serving as the inspiration for this later title, but it also appears to be the only wrestling game the company made.

Searching through archives of old games, hitting the lists of everything they've ever made, there aren't any other games with the word "wrestling" in their title. That was a surprising fact considering just about every company back in the NES era tried their hand at a wrestling title. Most of them were bad, but through the bad games were eventually got to the better ones. That eventually led to the Fire Pro series of wrestling games (from Human Entertainment) that were held as the gold standard for the genre. These games became so popular that every game company wanted to get their own take on the genre (at least in Japan). Konami, despite only having made one wrestling game before, went in on the action, too.

How you feel about Power Pro Wrestling '96 probably depends on how much you like the classic wrestling video game format: two guys in flat arena, running back and forth and doing basic moves. Konami's efforts don't stray far from that basic style (which, again, were perfected in the long-running Fire Pro series), they just added more extra material to it. More game modes, more fighters, more things to do and, most importantly, a way to do it all in an expansive field.

What Jikkyo Power Pro Wrestling '96: Max Voltage did, and what made it interesting among Japanese fans, was it took the basic mechanics of The Main Event -- it's basic tag-team style and pugilistic sensibilities -- and added on a deep career mode with a ton of characters to enjoy. Players could take a wrestler and play as them from the start of their career through to their retirement with only one catch: you couldn't lose too many matches. If you did, that was game over and you had to try again.

The depth of the game, and the long career mode, made this something of a rarity in the wrestling genre. Other SNES games of the time were more focused on single matches, arcade-style pick up and play affairs, but Konami went in for a longer mode. The desire was to give players a career experience something akin to league play in other sports titles. For players that enjoyed wresting games, this meant that Konami had a unique experience to provide.

Sadly, that didn't mean bringing the game overseas. Despite boasting a long career mode and a roster of characters from Konami's back catalogue (including Richter Belmont, which is why this game is covered on this site), the title never left Japan. Considering this game came out in 1996, when the Nintendo 64 was ramping up, the cost to translate this game and bring it overseas was just too high. It was a case of bad timing despite a well conceived game.

For fans of the Castlevania series, this is one of those weird related games that seemed to fall through the cracks. Konami hasn't revisited it, or re-released it since it's initial Super Famicom launch. It's a hidden wrestling gem for those that know to look for it (and like the genre). For all others, it's a passing curiosity to at least explore once.

I will say, though, that even my short stint trying to brute force my way through this game (in a genre I'm not that familiar with) was pretty fun. There's a goofy quality to wrestling that video games accent and enhance, and that plus just mashing away at the controls let me have a bit of a lark playing this game.