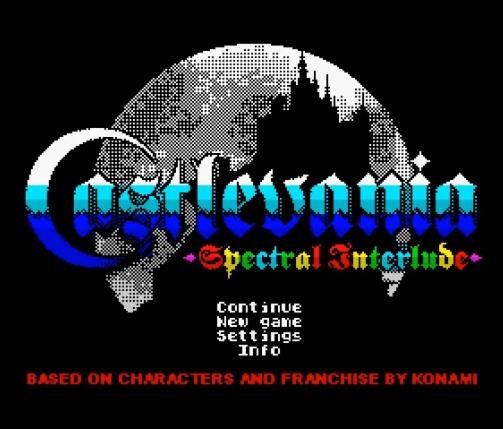 The Castlevania series has appeared on just about every major console since the birth of the NES. Nintendo consoles, of course, were the bread and butter for Konami for years, but then the series started pushing outwards, appearing in every generation (not unlike Dracula) to spread its lore and hook in more fans. But, what if the NES hadn't been the first console to feature a Castlevania game? What if it had appeared even further back first.

That is the idea posed by Castlevania: Spectral Interlude, a fan-game made for, of all consoles, the ZX Spectrum. If you haven't deep-dived into every weird nook and cranny of classic gaming, the ZX Spectrum was made by Sinclair Research and released largely in the UK before expanding out (in limited release) to other territories. Technically the console had a lifespan of a full decade, and it certainly was quite thee interesting upgrade in quality over other consoles of the era (like the Atari 2600 or the Magnavox Odyssey) but the second the NES came out, The Spectrum's days were numbered.

The big thing the Spectrum promised was full-color game play, which technically it provided through an interesting programming trick. Color on the console was handled via 16x16 squares of single on-off color (thus backgrounds could be a single color, or black, in pixelated tiles). Sprites or white and transparent color then moved over the background tiles, creating the illusion of color game play even if, on some level, sprites were still quite limited in their looks. It's a neat effect, and does look more zest than other consoles of the era, but the NES's full-color graphics, limited as they were, blew this console out of the water.

There's a charm to these graphics, though, and that charm is preserved in Spectral Interlude. Developer Noxxa originally started the project as a Castlevania II: Simon's Quest demake before the scope expanded. In its current form, Spectral Interlude is less a rom hack than a full-created game for a new console with a new story, new mechanics, but that classic look and feel preserved on this much older console. It's really a treat to behold. 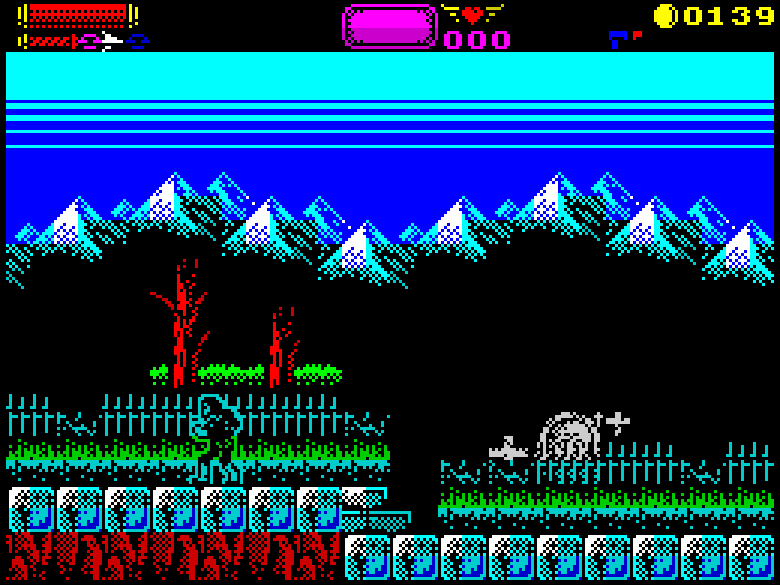 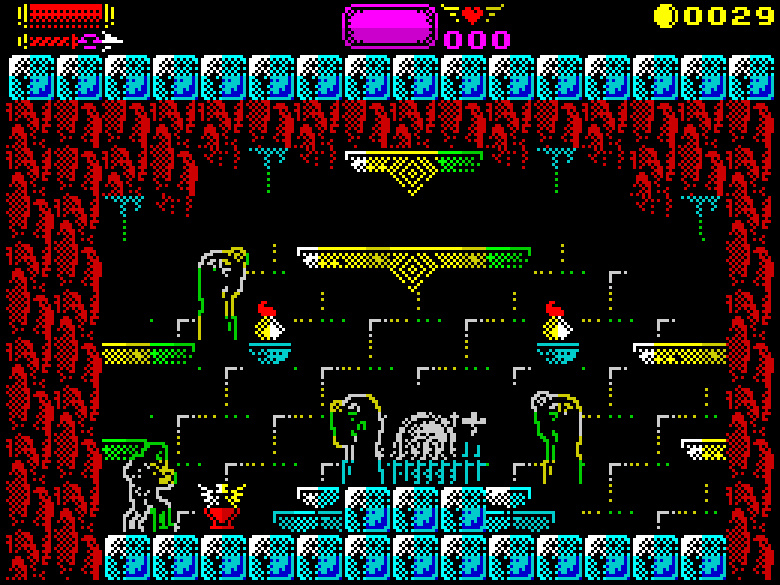 In the game, players take on the role of Simon Belmont (no, not that Simon Belmont), son of Richter Belmont and named after his famous ancestor. When the evil of Dracula (no, not that Evil of Dracula) spreads across the land, this new Simon has to take up the family's whip and find a way to wipe the evil from the countryside. Aiding him is Joseph, a mysterious sorcerer who helps to explain the details of the story and what Simon needs to do next.

The game is a Metroidvania, but one closer in conception to Simon's Quest than the later entries in the series. Our 2-bit hero will jump, whip, and explore his way back and forth across the countryside, taking out enemies and collection various power-ups, all so he can united the pieces of various mystical columns and find a way to raise the evil spirit of Dracula so that it can then be whipped back to Hell once and for all (or, since this is a Castlevania game, at least a little while longer).

Loading up the game (in an emulator as this is a rom specifically designed for the ZX Spectrum, unless you actually have a working ZX Spectrum sitting around), the game presents itself in all its plinky, weirdly colored glory. I won't lie, the first time I booted the game I was met with a bit of a culture shock. I'd seen older consoles before but I hadn't had much experience with the Spectrum and I found the graphics to be very weird. Once I got into the title though, I gained an appreciation for the aesthetic. It'd odd, yes, but with its own charm that suits the story and the style. It has a perfect verisimilitude to it that makes it feel like a perfect fit for its console and its era.

Aiding the game in that regard is the soundtrack. Due to the hardware of the Spectrum it does have a hard and plinky quality to it but, credit to Noxxa, they managed to crank out some absolute bangers from the console. There are tracks in this game, covers and rearrangements of classic Castlevania tracks, that are now in my regular playlists. They're that good and it actually makes me just a little sad that Konami never put out an official game on this console; I would have loved to see just what kind of tracks Konami could have come up with on this hardware. 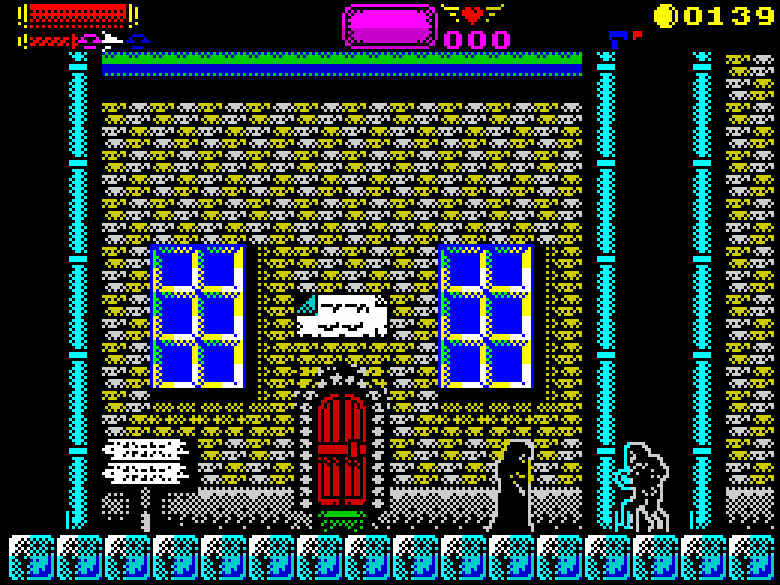 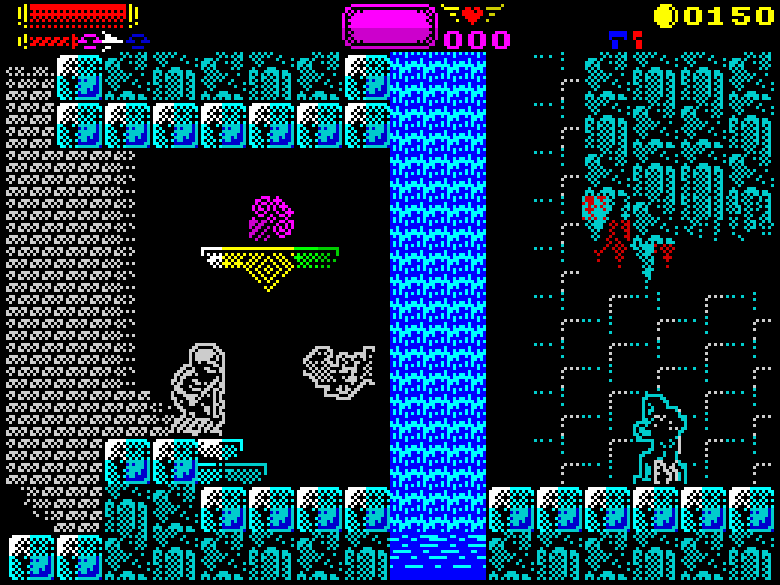 Once you settle into the game you'll find a complex adventure for this new Simon Belmont. It's an obtuse adventure, mind you, one that demands that you scour the countryside, looking for every nook and cranny if you want to find all the necessary items to complete the game. Some of the locations are absolutely devious in their placement, and the game is going to expect you to cross back and forth around the world, search over and over again as each new power-up is unlocked. For some players this might be a maddening experience, but others will find something interesting and satisfying to explore.

I will warn any players looking to pick up the game: Spectral Interlude is devilishly hard. I struggled to get through it and had to rely on save states at times just to get around some tricky situations. Those that have conquered the classic NES games and find them to be "too easy" now will certainly have a better time, but most casual players will likely struggle until they learn the depth of the game and the placement of every enemy and trap.

Still, if you can get into the game you'll find an interesting and rewarding experience. It's likely not for everyone, but even just checking out the concept of it, seeing the graphics and enjoying the music, can be fun for a while. The scope of this project is epic and it's really cool to see someone develop a game like this for hardware that never would have expected it. I even struggle to call this a "rom hack" as there was never a Castlevania for the console. Instead this is a true fan game made for old hardware and its done right and done well. Every fan of the series at least needs to try Castlevania: Spectral Interlude to appreciate the work put in on the title.