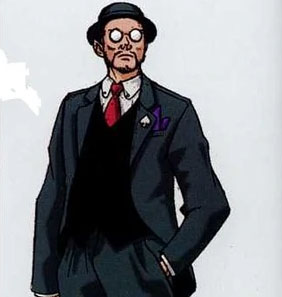 By the time of the release of Castlevania for the N64, shopkeeps were nothing new for the series. We'd seen vendors as far back as the first remake of the original Castlevania, Vampire Killer, along with its sequel Castlevania II: Simon's Quest, and they reappeared again later in the form of the Master Librarian in Castlevania: Symphony of the Night. They proved their worth, aided the heroes, and generally sat back and let the money roll in.

Renon is a special case, although you'd only know it if you struggled in the N64 entry. A demon by birth but a shopkeeper by trade, Renon maintained the balance between good and evil by providing good to the heroes that battled the evil. Around Dracula's castle Renon had left contracts that heroes could use; reading the contract would summon Renon, and he'd allow the heroes to buy food and other sundries. Get the supplies you need, then move on with your adventure deeper into the castle. Renon would pocket the coins to fund his life in Hell which was, by his own admission, very expensive.

The trick, though, was that as a demon Renon was really after the souls of the heroes. If they spent too much at his wandering "shop" -- 30,000 gold -- he's show up near the end of the game and claim that they'd fulfilled the contract and owed him their life. This would require a battle between the demon and the heroes, although thankfully it didn't directly change the ending of the game the heroes could eventually get. It was certainly a novel idea -- up until now, and even since, we haven't seen a shop keep that would actively attack the heroes after a certain point, making this quite special in the series.

In fact, it wasn't until the game inspired by the Castlevania series, Bloodstained: Ritual of the Night, came out that we saw another backstabbing shopkeep come along. That's a bit ironic since series producer IGA removed Castlevania 64 from proper continuity, and IGA is the creative mind responsible for the Bloodstained series. Interesting, that. 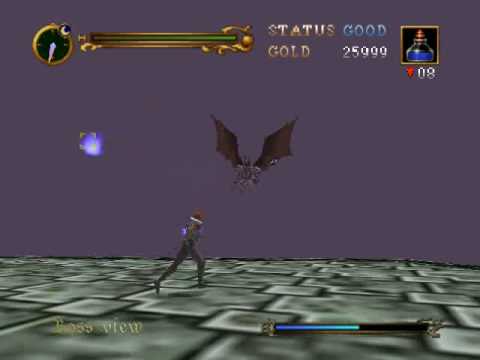 If you've bought too much from Renon, the aforementioned 30,000 worth of goods, Renon will appear in one of the last rooms of the castle leading up to the keep. There's a chance, if you've played the game, you never even realized this as you have to try to spend that much money at the store. More likely you passed through the room that Renon would appear in, found Renon standing around so he could mention he had business elsewhere, packing up his shop, and then continued up the stairs to the Castle Keep.

But if you did spend that much money at Renon's shop, the shopkeep will show up in his room before the end of the game. He'll explain that the contract states (in the ancient language of the demons, which of course you can't read) that if you "borrow" enough money from the demon (the 30,000 in cash that you spend at his shop) then he owns your soul. He'll then change into his demonic form and attack you in an attempt to claim that which is "his".

In his winged, demonic form, Renon will fly about the room, usually closer to the ground so the heroes can reach him. Eventually, though, he'll fly up, performing a complicated dance with the spear he's holding, before summoning balls of magic to fly at the hero's position. This will happen while giant demon fish fly out of the ground and into the sky. The heroes will need to keep moving to dodge these attacks and wait out Renon. He'll also swoop at the hero and swipe at them with this spear before flying off, summoning another trail of the balls of magic, which again need to be dodged. Overall, though, as interesting as the concept of this fight is, a shopkeep that attacks you, the battle itself is pretty simple.